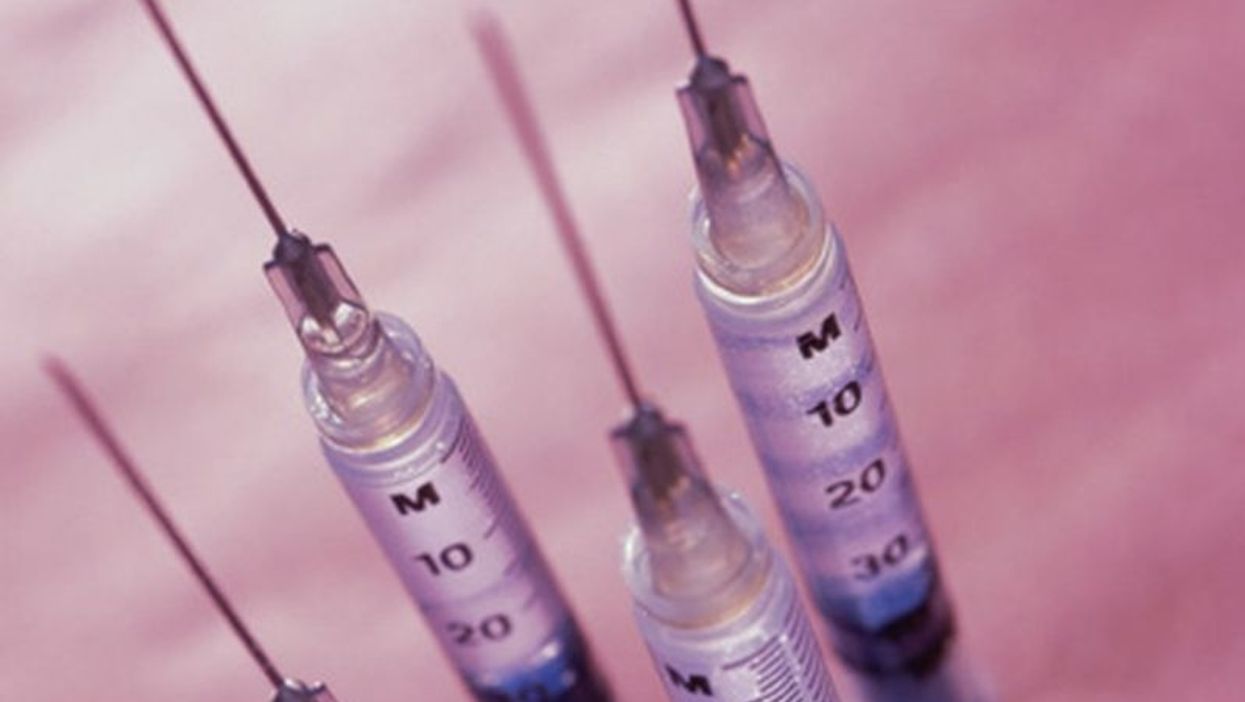 THURSDAY, March 25, 2021 (HealthDay News) -- President Joe Biden said Thursday that the country will put 200 million coronavirus vaccine doses into the arms of Americans by his 100th day in office, doubling the goal he first set when he was inaugurated.

It's a seemingly attainable goal: As of Thursday, the U.S. Centers for Disease Control and Prevention reported that a total of 130 millions shots had already been given, with 14 percent of the American population fully vaccinated.

"We will, by my 100th day in office, have administered 200 million shots in people's arms," Mr. Biden said, announcing his new goal at the start of his first news conference. "That's right — 200 million shots in 100 days. I know it's ambitious, twice our original goal, but no other country in the world has even come close."

Vaccine makers are now hitting their stride, and Pfizer, Moderna and Johnson & Johnson have promised enough doses to inoculate all 260 million adult Americans by May. In June, the first vaccine producers, Pfizer and Moderna, are expected to deliver another 100 million doses — enough to vaccinate 50 million more people, The New York Times reported.

In the past week, the United States has been averaging about 2.5 million doses a day. If that pace holds, the nation will indeed surpass the 200 million shots goal before Biden's 100th day in office, which is April 30, the Times reported.

Officials say the nation will soon reach a point where the supply of vaccine outpaces demand. At that point, the biggest challenge will be convincing still-skeptical Americans to get the shots, and deciding what to do with a growing stockpile, the Times reported.

Vaccine hesitancy is particularly prominent among minorities and Republicans, the Times said.

Earlier Thursday, White House officials said the administration would spend $10 billion on congressionally-appropriated money to expand access to COVID-19 vaccines and build vaccine confidence in the hardest-hit and highest-risk communities.

Following a sharp rebuke from an independent oversight board over potentially misleading information on the effectiveness of its coronavirus vaccine, AstraZeneca released new data late Wednesday that showed the vaccine is slightly less effective than the company claimed on Monday.

The pharmaceutical giant stressed that its vaccine is still very powerful at preventing infection with COVID-19, based on more recent data than was used when the company first announced the interim results of its U.S. clinical trial.

"The [latest] primary analysis is consistent with our previously released interim analysis, and confirms that our COVID-19 vaccine is highly effective in adults, including those aged 65 years and over," Mene Pangalos, executive vice president of BioPharmaceuticals R&D at AstraZeneca, said in a company news release. "We look forward to filing our regulatory submission for Emergency Use Authorization in the U.S. and preparing for the rollout of millions of doses across America."

The latest results do strengthen the case for the vaccine's efficacy, but they may not restore AstraZeneca's credibility with U.S. health officials, The New York Times said.

When it released its interim trial results on Monday, AstraZeneca ignored dozens of recently confirmed COVID-19 cases that had cropped up in trial volunteers before mid-February, the Times reported.

In a letter to the company and federal health officials later that day, the independent board that was overseeing the clinical trial issued a highly unusual reprimand to AstraZeneca for appearing to cherry-pick data to make its vaccine appear more effective, the Times reported.

"Decisions like this are what erode public trust in the scientific process," the oversight board's letter said. The members of the monitoring board wrote that their statistical modeling had found that the vaccine might have a lower efficacy rate -- between 69 and 74 percent -- if the COVID-19 cases in question were included in the analysis, the Times reported.

The National Institute of Allergy and Infectious Diseases later issued a public statement that urged AstraZeneca to work with the oversight board "to review the efficacy data and ensure the most accurate, up-to-date efficacy data be made public as quickly as possible."

It was not clear on Wednesday why the oversight board's projection turned out to be lower than the figure in AstraZeneca's latest results. Those statistics could still change because there are still 14 possible COVID-19 cases that AstraZeneca officials have not yet classified as actual cases, according to the company's statement.

The dispute over AstraZeneca's U.S. trial results follows a safety scare in Europe that prompted more than a dozen countries to temporarily suspend use of the vaccine. European regulators said last week that a review had found the shot to be safe, after a small number of people who had been vaccinated developed blood clots and abnormal bleeding. The U.S. trial did not turn up any signs of such safety problems, the Times said.

AstraZeneca's latest efforts might not make much difference in the United States, where the vaccine is not yet authorized and is unlikely to become available before May, the Times said. By then, there will be enough vaccine doses for all of the nation's adults from the three vaccines that have already been authorized: Pfizer, Moderna and Johnson & Johnson.

Already approved in more than 70 countries, the AstraZeneca vaccine has been given to millions of people worldwide, including more than 17 million in Britain and the European Union, the Times reported.

Nearly half of the public schools in America are now holding in-person classes, with white children far more likely to be in those classrooms than Black, Hispanic or Asian students, the first federal data on the state of education during the pandemic shows.

The survey, released Wednesday, suggests the nation is moving toward a goal set by President Joe Biden for a reopening of schools, but the country is still a fair distance from a full return to normalcy.

Polling from a representative sample of more than 3,500 schools serving fourth- and eighth-graders in 42 states, the report offers the first demographic and regional breakdown of in-person learning.

Biden has said he wants a majority of K-8 schools open for full-time, in-person classes by his 100th day in office, at the end of April. The survey, which mostly covered January, suggests he could hit that target. It found 47 percent of schools serving fourth-graders and 46 percent of those serving eighth-graders were open for full in-person instruction, the Washington Post reported.

Nevertheless, the survey also found millions of students still don't have full-time school available, while many other families have opted for remote education.

Overall, 60 percent of fourth-graders and 68 percent of eighth-graders were still learning at home for at least part of the school week.

"We're a long way from normal," Dennis Roche of Burbio, a data firm that has been tracking school reopenings through its own surveys, told the Post. "Offering in-person education is not the only step. It's a major step, but it's not the end. You've got to get students in the classroom taking advantage of it."

The prolonged period of remote schooling has taken a significant toll on students' academic and emotional well-being, experts and parents alike fear. Some school districts have been open since last August, but others have struggled for months to craft plans that teachers and parents will accept, the Post said.

Perhaps most troubling is the racial divide seen in the results. About half of all White students were attending school in person full-time in January, the survey found. But that was true for just 28 percent of Black students and 33 percent of Hispanic students. Rates were lowest among Asian American students, at just 15 percent.

Asian American families have said they worry about elderly parents in cramped, multigenerational households, distrust promises of safety measures and fear their children will face racial harassment at school, the Post reported. Some are also pleased with the online learning. And many live on the coasts, where their districts are less likely to offer full-time options.

Black and Hispanic families, who have seen their communities ravaged by the pandemic, have also been more reluctant to return their children to classrooms.

"The world told Black and Brown people they were three times more likely to die from coronavirus ... [that] Black and Brown people needed to be more afraid of coronavirus than other people," Krystal Barnett, executive director of Bridge 2 Hope in St. Louis, a parent advocacy group, told the Post. She said many parents concluded, "Of course I'm not bringing my child back, because in my mind, they're still three times more likely to die than their counterparts."

Rates of in-person enrollment also varied dramatically by location: More than half of fourth-graders living in rural areas or towns were enrolled in full-time, in-person programs. In the suburbs, it dropped to 36 percent, and in cities, it was just 25 percent, the Post reported.

In Brazil, the coronavirus case count was over 12.2 million by Thursday, with more than 300,600 deaths, a Johns Hopkins University tally showed. India had nearly 11.8 million cases and over 160,600 deaths as of Thursday, the Hopkins tally showed.

Worldwide, the number of reported infections neared 124.9 million on Thursday, with over 2.7 million deaths recorded, according to the Hopkins tally.