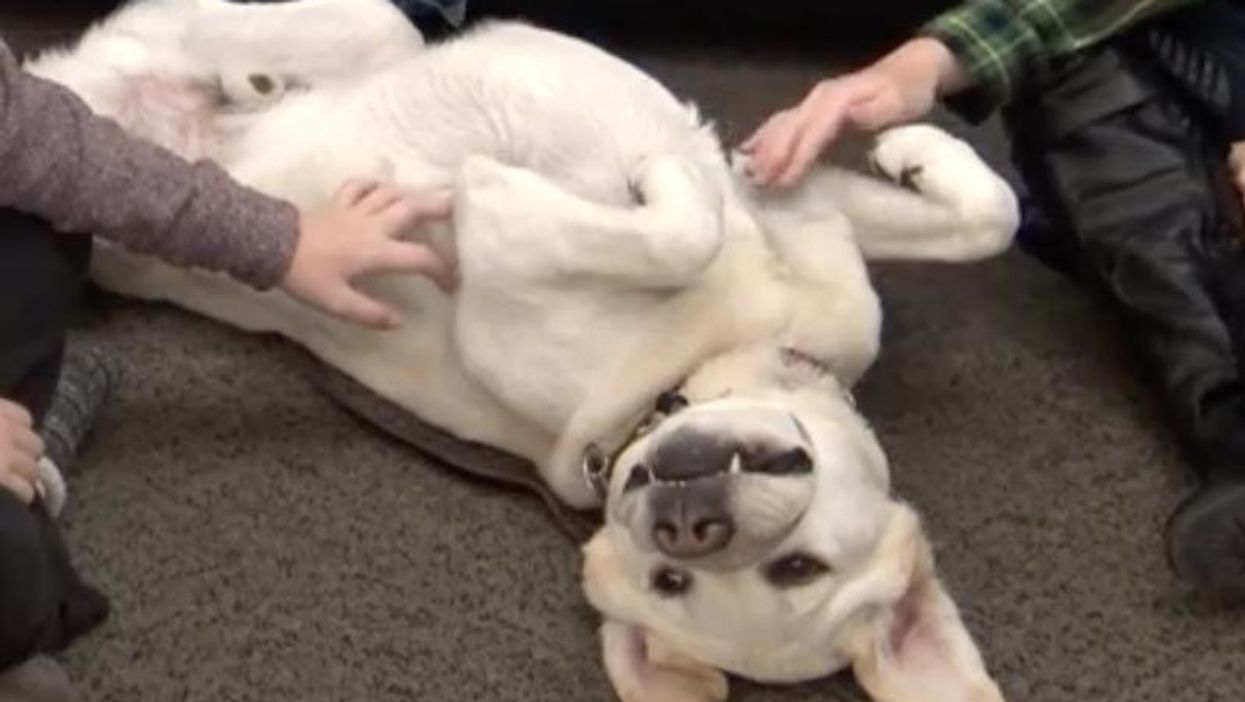 WEDNESDAY, May 19, 2021 (HealthDay News) -- A help in 'ruff' times: When it comes to coping with the stress of college life, new research shows that vulnerable students are far better served by therapy dogs than stress management courses.

In the study, more than 300 students at Washington State University were randomly assigned to participate in one of three different types of stress-management programs for a month. Each group met once a week for an hour-long session. Around a third of the participants were deemed "at-risk" by the researchers, based on survey responses that showed they were dealing with mental health concerns, learning disabilities or were struggling academically.

"The main difference between them was the amount of human-animal interaction," said study author Patricia Pendry, an associate professor in the department of human development at Washington State.

In previous research, Pendry found that just 10 minutes of petting a dog could act as a stress reliever for students, measured by reductions in cortisol, known as the "stress hormone." In this new study, she wanted to determine if more prolonged interactions with therapy dogs could reduce stress enough to improve students' thinking, learning and time-management skills.

One group's meetings were similar to a typical college class -- no dogs were present as a teacher presented research-based information about stress and coping, guided meditations and other exercises related to stress management.

The second group did not receive any evidence-based research on stress and spent their meetings petting and interacting with registered therapy dogs while participating in exercises such as meditation and unstructured discussions with their peers.

The final group had a hybrid curriculum -- spending half of their meetings exactly as the first group with no dogs present, and the other half like the second group.

Researchers measured the participants' "executive functioning" before, immediately after, and six weeks after the program. Executive function is a blanket term that covers many of the skills needed to succeed academically, such as planning, organizing, paying attention and learning information.

According to the study, the program that centered exclusively on petting and interacting with therapy dogs led to the most significant executive functioning improvements among the more than 100 students deemed "at-risk," who were likely the most stressed-out.

"The students who are most likely to have a hard time coping with stress, when they engaged in the program that only had interactions with animals -- those were the students who improved their executive functioning skills compared to "at-risk" students in other groups," Pendry said.

Six weeks after the program concluded, the improvements in executive function remained.

The results were published online recently in the journal Aera Open, a peer-reviewed journal of the American Educational Research Association.

While executive functioning improvements were found across the board for the "typical" students, or those who were not considered "at-risk," it was not evident that one type of program was superior to another.

"It may have been that their executive functioning was, as a group, already higher, and there may be a ceiling effect or not a tremendous opportunity to get better because they were already functioning quite well," Pendry noted. "The highly stressed-out students are the ones who clearly benefited from human-animal interaction."

According to Pendry, when people are stressed, it becomes challenging to perform many of the skills that fall under the umbrella of "executive function."

While the mechanism behind the stress-relieving effect of spending time with animals is difficult to measure, most animal lovers will understand the general idea. Pendry said one theory is that dogs act as a sort of "social lubricant," increasing one's comfort level in any given space. "You feel socially supported by others because everybody seems nicer, friendlier and happier," she explained.

Amy Hrin, who has 20-plus years of experience bringing therapy dogs to all sorts of people, including students, veterans and hospital patients, said that the new study "rang true" with her experience as a therapy dog handler. She is the national director of military affairs and special projects at American Humane, and was not part of the new research.

Hrin said that dogs seem to help people focus on something besides their internal stress and thoughts.

"Dogs are such a great, happy distraction from our troubles. I think they bring you out of your head," Hrin said. "And when you think about this particular population -- students who are away from home -- and here they can have this chance to give and receive affection with this warm, friendly animal. If you can't have a hug from Mom right now, this the next best thing."

"If you're already somebody who struggles with executive functioning and you're stressed, and you have a history of challenges, being able to talk with other students in a non-threatening, relaxing, socially supportive environment is probably very nice," she said. "It is different than sitting in front of a slide presentation and learning how harmful stress is."

The U.S. National Institutes of Health has more about the health benefits of human-animal interactions.