AHA News: After Three Strokes, He 'Overheard' the Grim Prognosis and Fought Back 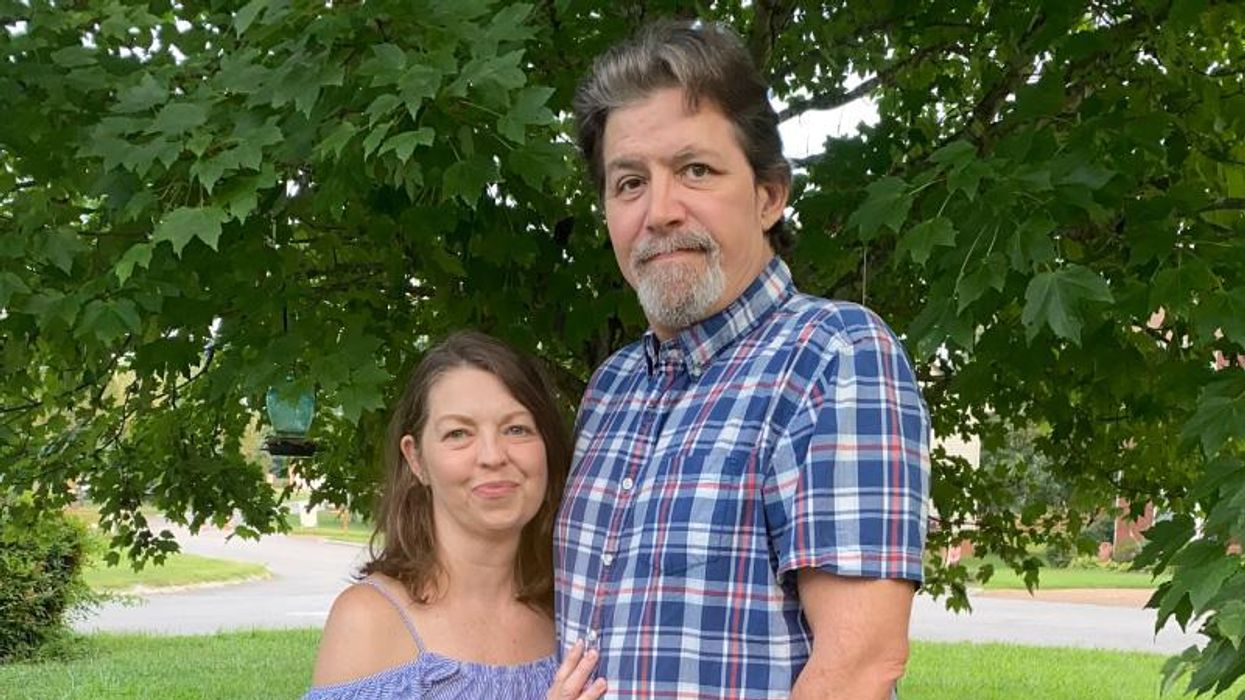 Stroke survivor Mark Davis (right) with his wife, Lisa, in a photo he provided.

FRIDAY, Aug. 20, 2021 (American Heart Association News) -- As Mark Davis slowly woke up, he shuddered over the terrible dream he'd just experienced. In it, he had no feeling in his right side and each breathe was a struggle.

He was relieved to leave it behind as he thought about getting up and going to work.

Except, he couldn't move.

It wasn't a dream. He was in a hospital bed with a breathing tube down his throat.

His wife, Lisa, was in the room. So were nurses and a doctor.

Mark heard the doctor tell Lisa that a series of strokes left her husband with locked-in syndrome. Mark had recently seen a television show that included the neurological disorder. So he knew it meant he could be paralyzed except for his eye muscles. He could think, but not speak or move.

The doctor told Lisa all the things Mark wouldn't be able to do – that is, if he survived. He braced her for a best-case scenario of life in a long-term care facility, breathing with a ventilator.

"That is not what my life is going to look like," Mark wanted to tell his wife of 30 years. But he could only make that promise to himself.

Mark first noticed a problem in July 2019. While trap shooting in a remote area of Tennessee, he felt so weak and dizzy that he thought he was going to pass out. Minutes later, he felt fine.

Those symptoms played out almost daily, although milder. Yet sometimes they included double vision.

Never one to see a doctor, he was frightened enough to see a general practitioner. He was prescribed migraine medication. The medication wasn't helping, so he requested an appointment with a neurologist. However, that visit was six weeks away, on Oct. 30.

The evening of Oct. 29, Mark felt weak and nauseous. His eyes shifted left and stayed there. To walk straight, he had to turn his head to the right.

He called for Lisa.

At the hospital, a CT scan showed Mark was having a stroke. He was given clot-busting medication and transferred to a larger hospital in nearby Nashville for more specialized care.

During the ambulance ride, Mark had a second stroke and lost movement in his right side. In the emergency room, he had a third stroke, which paralyzed his diaphragm and stopped his breathing.

Doctors also said she might have to decide whether to take him off the ventilator.

"They didn't give me any hope," Lisa said. "But I just blocked them out. I wasn't ready."

Three days later, one of Mark and Lisa's three daughters noticed her father's left thumb twitch. She excitedly called for a doctor.

"It's just a reflex," the doctor said.

"It's not just a reflex," Lisa insisted. "He's trying to get our attention."

Finally, Mark thought. Someone is listening.

He hated that they talked as if he couldn't hear them.

From that moment on, he said later, "I took every negative word those doctors said as motivation."

His family posted a sign on his hospital door saying, "Negative-free zone. Positive conversations only, please." Mark is convinced that was the key to his recovery.

With a speech therapist, Mark began to communicate with eye movement.

After two weeks, he was transferred – not to a long-term care facility, but to a rehabilitation facility, where Lisa would learn how to care for him.

When Dr. Antoinne Able walked in to meet the couple, Mark gave him a half thumbs-up.

Mark and Lisa celebrated many milestones during his rehabilitation, but Lisa's favorite was when she heard him use his nickname for her: Sweet Pea.

Mark's most memorable moment came when he was being taught to use a slide board to transfer from one spot to another. When asked to start moving, Mark "just kept going," he said.

Eventually, he astonished everyone – including himself – by standing.

When he left the hospital on Dec. 31, he took several steps on his own with a walker on the way to his car.

Once home, Mark went regularly to outpatient rehab, working on his speech, gait, coordination and strength. In June, he returned to work as a network engineer.

Today, Mark feels he is about 85% recovered. He continues to work on vision and balance. He also struggles with uncontrollable bouts of crying.

"While a good many survive this catastrophe, only a few will actually return to work," Able said.

Mark feels the stroke has made him more patient and less judgmental.

"My thinking used to be, 'Lead, follow or get out of the way.' I understand now that that's not always possible."