AHA News: Fauci Offers a COVID-19 Lesson and Looks to the Future 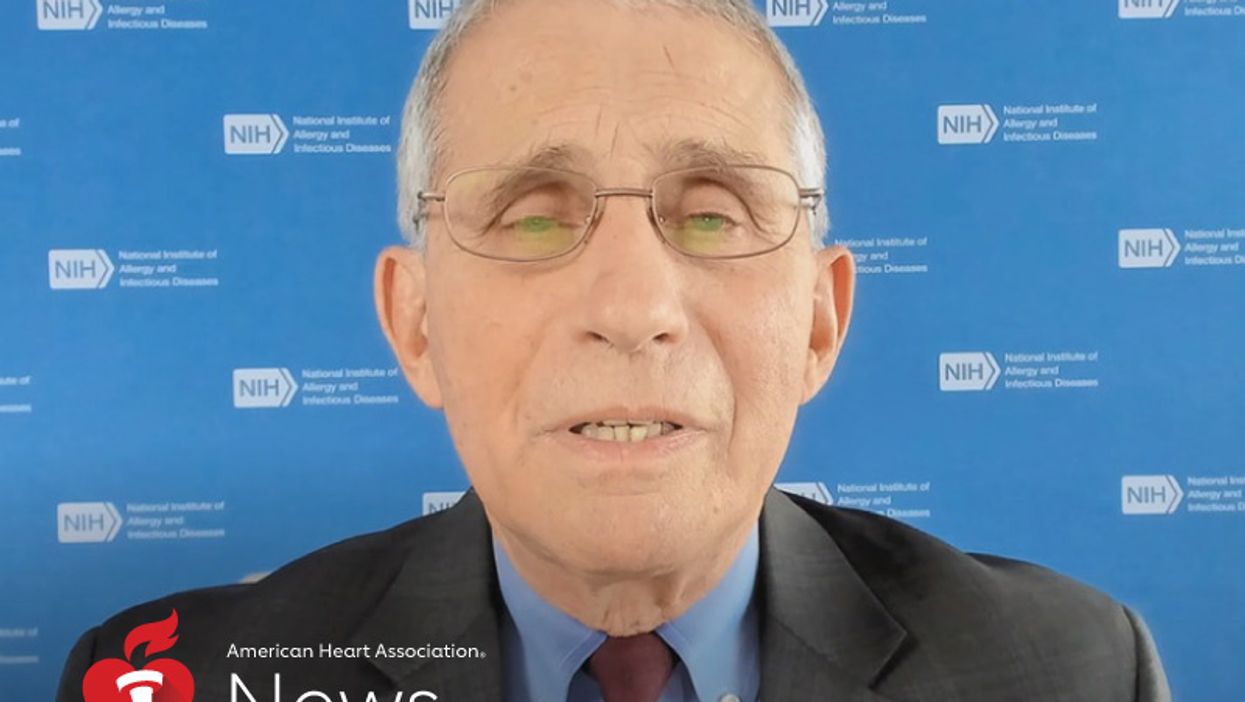 WEDNESDAY, Nov. 18, 2020 (American Heart Association News) -- Dr. Anthony Fauci stuck to the science in recapping the story of COVID-19, noting that while the disease has hit the U.S. hard masks and physical distancing could help – and that vaccines are on the way.

Fauci, director of the National Institute of Allergy and Infectious Diseases and dubbed "America's doctor" by The New Yorker earlier this year, spoke in a pre-recorded address streamed Tuesday at the American Heart Association's virtual Scientific Sessions.

Calling the disease "a global pandemic of historic proportions, the likes of which we have not seen in the last 102 years," he looked at what fueled the spread of the coronavirus, spelled out who's at risk and expressed optimism about the future of vaccines.

According to the Johns Hopkins Coronavirus Resource Center, total U.S. cases have topped 11.3 million and deaths have surpassed 248,000. Globally, more than 1.3 million people have died.

"In the United States, we have been hit the hardest of any other country," Fauci said.

He used data from the U.S. and Europe to show how the spread of the virus slows when people stay home. Over the late spring and summer, the average number of new cases in Europe fell significantly and stayed relatively flat until recently.

U.S. cases began a resurgence in June "due to the attempts to so-call reopen the economy, or reopen the country," he said, but the openings didn't all adhere in the same degree to the guidelines that were released. "Different states did it differently."

He cited data showing that Americans never stayed home as much as people in Italy and Spain did.

"Why did we in the United States not go back down to a low baseline after our initial peak?" he asked. "If you look at the degree to which we actually shut down or locked down, there was significant difference between the European Union and the United States."

In terms of who is most affected by the disease, he said that in the U.S., racial and ethnic disparities are "really quite serious." And he noted chronic heart conditions and other underlying medical problems are related to severe cases of the disease.

"This needs to be repeated in other labs and followed up," he said. "But if it is true, it's something we need long-term follow up (on)."

He was optimistic about the six companies developing and distributing vaccines as part of Operation Warp Speed. Drugmaker Pfizer announced promising data on the effectiveness of its vaccine last week; Moderna followed with its own results on Monday.

"The other companies are also not far behind," he said. "We now look at this with cautious optimism that by the end of this calendar year and well into 2021, we will be administering doses, first to the highest priority, and then ultimately to virtually everybody in the United States as we get into – several months into – 2021."

Meanwhile, widely publicized measures can help stop the spread of the virus, he said.

"One is the universal wearing of masks or cloth coverings. The other is maintaining physical distances – at least six feet." People should also avoid crowds, particularly indoors; conduct activities outdoors if possible; and frequently wash their hands.

"If those five public health measures were adhered to universally and consistently over the country," Fauci said, "it is clear from my previous experience with other nations and even regions in our own country, we would not be having the degree of surging of cases that we are currently seeing."

Study Estimates Prevalence of Lupus in the U.S.

Tocilizumab Does Not Improve Outcomes in Severe COVID-19

Impact of Antidepressants Examined in Back Pain, Osteoarthritis