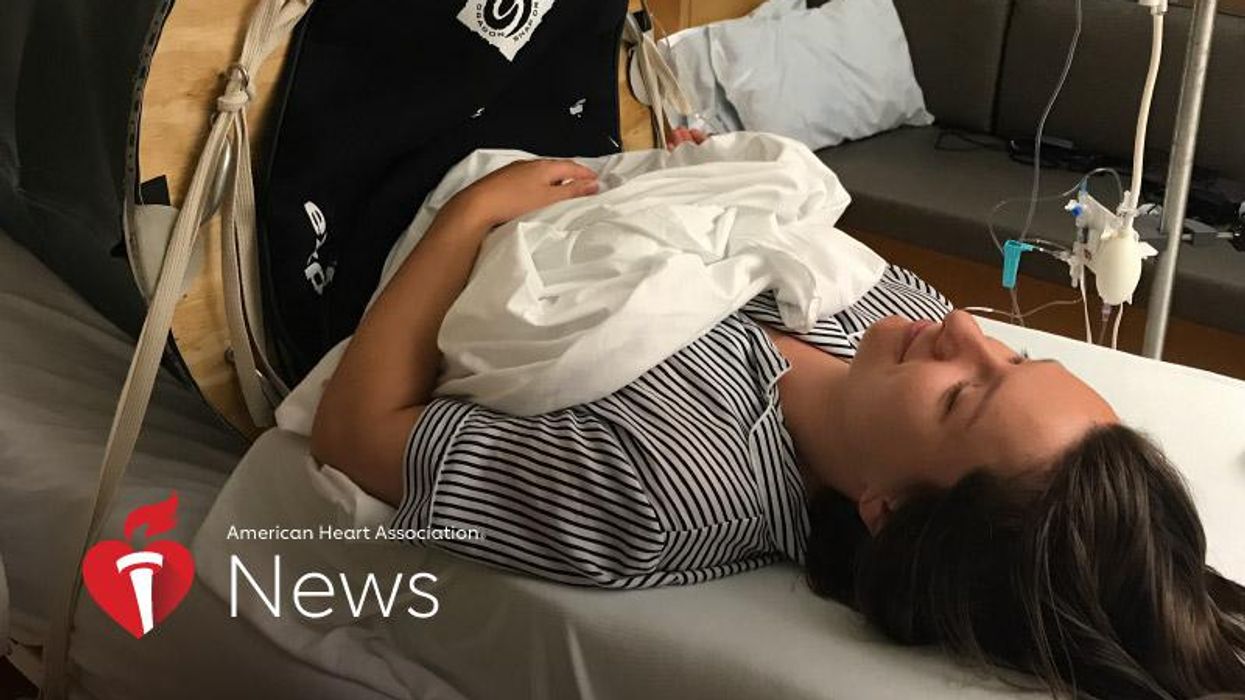 FRIDAY, Dec. 4, 2020 (American Heart Association News) -- A sleeping bag attached to a vacuum cleaner might not sound like the stuff giant leaps are made of. But researchers using just that have taken at least a small step toward solving a serious problem for space travelers.

The problem is the way blood behaves in the absence of gravity.

When you're standing up on Earth, gravity pulls blood and fluid down into your feet and away from your head. "But when you go into a microgravity environment, that no longer happens, and you actually get this upward fluid shift," said Katrin Dias, a recent postdoctoral fellow at UT Southwestern Medical Center and the Institute for Exercise and Environmental Medicine at Texas Health Presbyterian Hospital in Dallas.

It's called "puffy-head, bird-leg" syndrome. It might sound comical, but it's no fun for astronauts. It can cause pressure to build behind the eyes. That can lead to spaceflight-associated neuro-ocular syndrome, or SANS, which can affect their vision.

Dias led a team of researchers testing out a prototype of a device aimed at addressing the issue while astronauts sleep.

The team experimented on 10 earthbound volunteers who for several days were confined to bed rest, with their heads kept at the same level as their hearts. Keeping people in such a position mimics microgravity's effects on the heart and on the way blood and fluids build up.

Other recent research had shown that putting study participants in a device that lowered the air pressure on their legs while they slept mitigated some of the fluid buildup by pulling blood down to the legs. But Dias said that device was rigid and impractical for use on the International Space Station. So, her team repeated that research with something more practical – essentially, a sleeping bag with a household vacuum cleaner attached.

The volunteers slept for three nights with the device and three nights without. Researchers assessed its effectiveness by using a catheter to check pressure in the veins near the heart. They also measured changes to the thickness of a layer of the eye called the choroid that's dense with blood vessels.

The suction sleeping bags made a difference: On nights when participants slept under normal pressure, the volume of the choroid layer grew 3.8%. With the device pulling blood down to their legs, it grew only 1.8%. The catheter readings also showed a reduction in pressure in the veins near the heart, meaning that the device was effective at pulling blood away from the head and down to the feet.

The research was presented recently at the American Heart Association's virtual Scientific Sessions. It is considered preliminary until published in a peer-reviewed journal.

Dias, who now works in the private sector, acknowledged this was not the first attempt to come up with a way to pull blood to astronauts' legs. The Russian Chibis suit – which Dias described as "sort of like trousers that you wear" during the day – acts on a similar principle. But the sleeping bag approach is new for NASA, she said, "and this is really the model that they're going to use going forward."

The concept will need a lot of additional testing and redesigning before it arrives in space, she said.

The research adds one more bit of knowledge that will help make longer-term space missions possible in years to come, said Christopher Mason, an associate professor in the department of physiology and biophysics at Weill Cornell Medicine in New York. He was not involved in the new study, but he did lead a team involved in NASA's Twins Study, which compared identical twin astronauts Mark and Scott Kelly while Scott was on a yearlong mission in orbit.

The concepts tested in the sleeping bag research aren't new, he said, but the results provide additional evidence for how to best solve the fluid buildup problem. Unless the vision issue is solved, an astronaut "might be able to get to Mars, but you might not be able to see any of the red dust when you do get there."

It's far from the only space-related health question waiting to be answered. In June, Mason co-wrote an extensive review of the problems spaceflight poses to the cardiovascular system. They range from the fluid issues to potential artery damage from cosmic radiation.

Mason was the senior author on another study published last week in Cell Reports that used data from the Twins Study to examine astronauts' risk of genetic mutations. The findings showed the twins started accumulating mutated blood cells, a phenomenon called clonal hematopoiesis that becomes more likely with age. The problem is, the brothers developed it almost two decades earlier than what's considered normal, and previous research has linked clonal hematopoiesis with a nearly twofold increase in coronary heart disease and a fourfold increase in early heart attacks.

But Mason believes answers to such problems are within reach. An astronaut sent on a multiyear mission to Mars today would "probably be OK," he said. "I don't think there's any sort of red flags, if you will, that would say, 'Oh, this is just a game-stopper.' But there's lots of risks that are yellow flags – things that definitely are worrisome that we don't have good answers for. The radiation being among them. The damage to the eye being another.

"These are things that you can probably survive. But you might have permanent damage from the mission, and we want to get those risks as close to zero as possible."

He drew a comparison to the expeditions of Lewis and Clark to explore the Pacific Northwest at the dawn of the 19th century. "They really had no idea what they'd encounter, how dangerous it would be, or if they could be sure they'd return. But they went ahead anyway to chart the unknown."