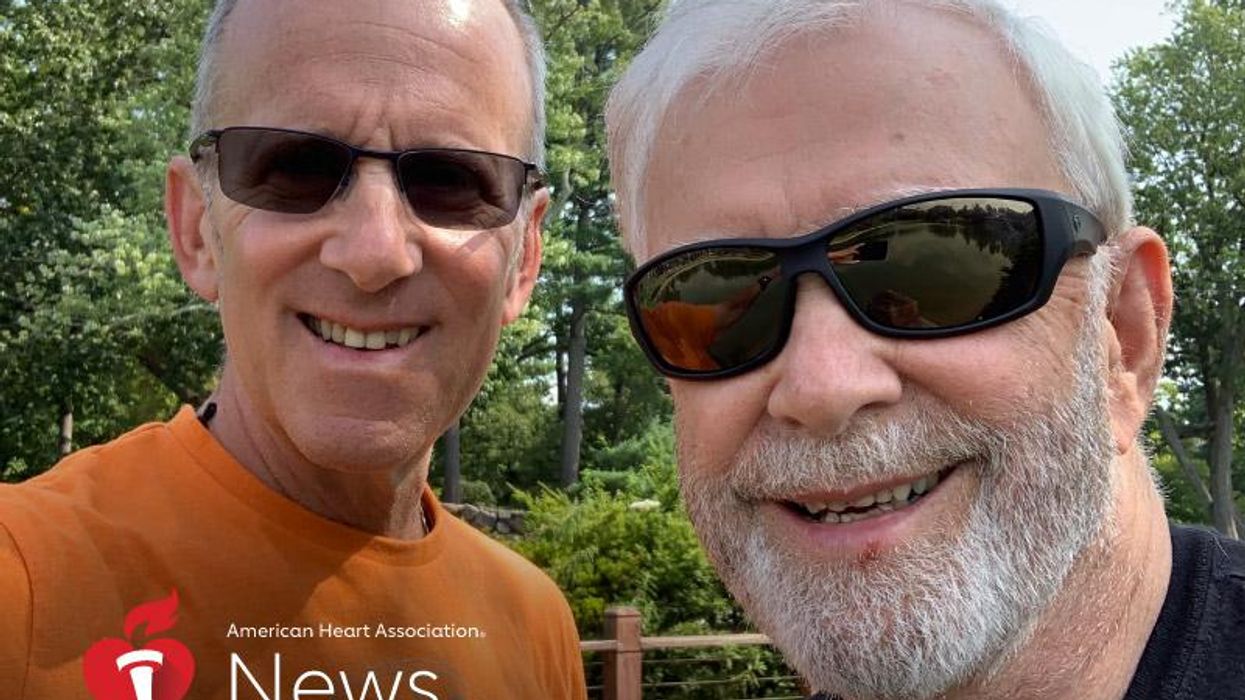 FRIDAY, May 7, 2021 (American Heart Association News) -- When 81-year-old Dick Connery had back surgery in 2019, his son Tim Connery became his primary caregiver. Tim moved in temporarily, ran errands and kept his dad company.

Then, Tim said, "in the blink of an eye, things changed."

One morning, about three weeks after Dick's surgery, 57-year-old Tim woke up feeling confused and out of sorts. Nevertheless, he continued about his day, even hopping in the car to run errands.

Increasingly dizzy, he passed out while driving. His car veered off the road and launched into the air. That's when he came to, a fact verified by his fitness-tracking watch recording a spike in his heart rate.

Other drivers pulled over and called 911. It's blurry now, but he remembers realizing his legs didn't work right. Within minutes, the ambulance arrived.

Tim's spine was fractured. He was rushed to a trauma ward, where he remained for five days. Doctors also discovered he had suffered a stroke.

Once ready for recovery, Tim was sent to the same rehabilitation hospital where his dad went after back surgery.

Because Tim and Dick were both sporting a beard at the time, a couple of nurses mistook Tim for his father.

"They were confused and couldn't believe it," Tim said.

Dick was still going to the hospital for outpatient therapy. He spent as much time as possible at his son's bedside. Once Tim was released, "we switched roles," Dick said. "I was taking care of him."

While the two had always been close, this was the first time in years that they had spent so much time together. It gave them a chance to mourn the loss of Tim's mother, who had died the year before. She and Dick had been married for more than 50 years.

"We had a chance to grieve together, which was a blessing," Tim said. "We just leaned on each other, both physically and figuratively, in those early days."

Said Dick: "It was a little bit like finding an old friend. I didn't realize how much we had in common."

The two quickly fell into a new routine, trading jokes and spending time at a nearby tavern. They saw each other in a new light. "He's outgoing, funny and extremely smart," Tim said.

Both outdoor enthusiasts who are into photography, the two would also set out with canes and crutches, hobbling along and enjoying each other's company. Dick recounted old stories, some of which Tim had heard many times before.

"It was the best thing that ever happened to me in terms of my relationship with my father," Tim said. "He was my brother-father."

Eager to get back on his bike, Tim took his surgeon's advice and started regaining strength by walking as much as he could. He soon worked his way up to 6 or 7 miles a day.

Other aspects of his recovery have gone less smoothly. For instance, his peripheral vision has yet to fully return. When he was first released from the hospital, he kept seeing a woman standing on his left side. In rehab, he learned to look at the figure, which would teach his brain she wasn't really there.

"The first time it happened, it was pretty scary. But my brain has figured out it's not something to be concerned about," Tim said.

Sometimes, he has trouble finding the right word, mixes up directions and says the opposite of what he's trying to communicate.

"In the grand scheme, my deficits are puny compared to what could have happened to me," Tim said. "But they remind me of the catastrophic day I could have died, and I'm still coming to terms with that."

Tim eventually started biking again. Dick was healthy enough to join him. Tim still remembers the way the cool wind felt against his face – an experience he wasn't sure he'd have again.

Now, Tim rides up to 50 miles at a time, exploring his new state of Maine, where he relocated from Albany, New York, to be closer to his girlfriend.

Eager for others to learn from his experience, Tim got involved with the American Heart Association, the Bicycling Coalition of Maine and CycleNation, ultimately participating in a ride to raise funds for World Stroke Day.

"I wanted to get the word out about some of the statistics I became aware of during my recovery," Tim said. "A lot my friends perceived me to be a low-risk person and couldn't believe what happened to me."

While Tim's move means less time with his dad, they appreciate the time they spent together – despite the circumstances. Or maybe because of them.

"He was there for me, and, concurrently, I was there for him," Tim said. "I'm really glad I had the experience, and I think he's glad as well."