See What HealthDay Can Do For You
Contact Us
October 18, 2017

Cooling Mitts, Socks May Ease a Major Chemo Side Effect 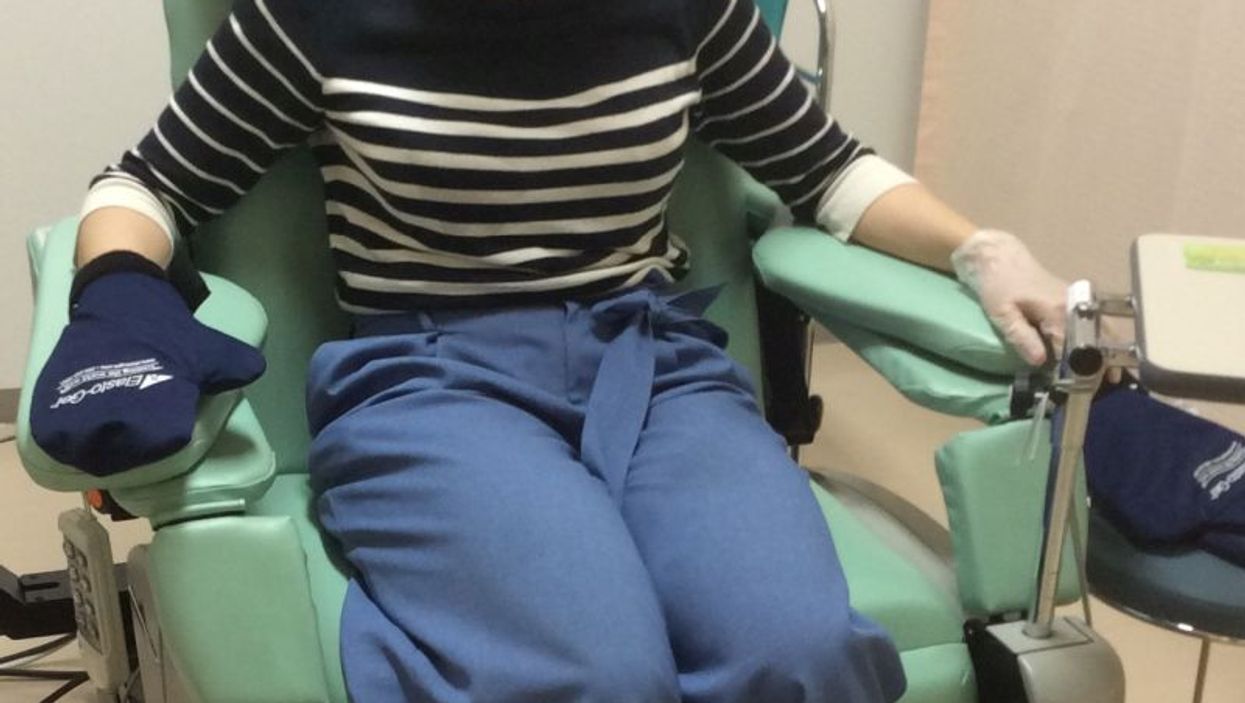 WEDNESDAY, Oct. 18, 2017 (HealthDay News) -- Many cancer drugs can cause debilitating nerve damage as a side effect. But a small study suggests that simple cold wraps to the hands and feet might prevent it.

The side effect, known as peripheral neuropathy, damages nerves in the limbs. This often leads to pain, numbness and tingling, and difficulty with balance and using the hands and fingers.

There are treatments for peripheral neuropathy, according to the American Cancer Society. But there are no proven ways to prevent it.

In the new study, researchers tested a simple tactic: having patients wear frozen gloves and socks during chemotherapy.

With that protection in place, patients were much less likely to develop symptoms of nerve damage, the study found.

Medical experts said there are reasons to be excited about the findings.

For one, the therapy is "easy and safe," said study leader Akiko Hanai, an occupational therapist at Kyoto University, in Japan.

Still, there are cautions, she said.

Besides its small size, the study looked only at patients being treated with the drug paclitaxel (Taxol). It's not clear, Hanai said, whether cold therapy would have similar benefits for patients on other cancer drugs.

And the tactic is not one for people to try on their own. In this study, the frozen socks and gloves were donned during chemo -- with therapists standing by to make sure the cold was tolerable, Hanai said.

The findings are based on 36 women undergoing paclitaxel treatment for breast cancer. The researchers had each patient wear a frozen glove and sock on the dominant side of her body during the chemo sessions, leaving the other hand and foot to serve as the "control."

There was no fancy technology involved. The researchers used commercially available cold wraps marketed as Elasto-Gel, by the France-based Akromed. (The company did not fund the study, according to Hanai's team.)

Just under 28 percent of patients developed numbness in the hand that was covered by the frozen glove -- while the unprotected hand was affected 81 percent of the time, the findings showed.

The difference was similar when it came to numbness in the feet: Almost 64 percent of patients developed the problem in the unprotected foot, while 25 percent suffered numbness in the sock-clad foot.

And in dexterity tests, the women showed a bigger treatment-related decline in the unprotected hand, versus the glove-protected one.

"The results of this study are very exciting," said Dr. Dawn Hershman, who wrote an editorial published with the findings.

"If they are confirmed, this may be a low-cost and low-risk option for patients," said Hershman, who leads the breast cancer program at Columbia University Medical Center in New York City.

But, she said, the therapy still needs to be tested in larger, "randomized" studies -- where patients are randomly assigned to receive cold therapy or not. Those types of trials are considered the gold standard in medicine.

It not only drains patients' quality of life, she said, but can also cause them to stop treatment early.

Paclitaxel and similar "taxane" drugs -- like docetaxel and cabazitaxel -- are among the common causes of peripheral neuropathy, according to the American Cancer Society. So are "platinum" drugs, such as cisplatin and carboplatin, and so-called plant alkaloids, such as vinblastine and vincristine.

At the same time, Comen said, there's little downside to the tactic.

"If a patient came to me wanting to try it, I'd support it," she said. "I think this is something patients can discuss with their doctors now. It's a reasonable option."

If cold therapy does thwart peripheral neuropathy, it's not clear why, Hershman said.

Comen agreed that the mechanism is unclear. But, she said, the approach is similar to the "cold caps" sometimes used to reduce hair loss from chemo. In theory, that works by restricting blood flow to the scalp, which may limit the amount of chemo that reaches hair follicles.

The study was published online Oct. 12 in the Journal of the National Cancer Institute.

The American Cancer Society has more on chemotherapy-induced peripheral neuropathy.