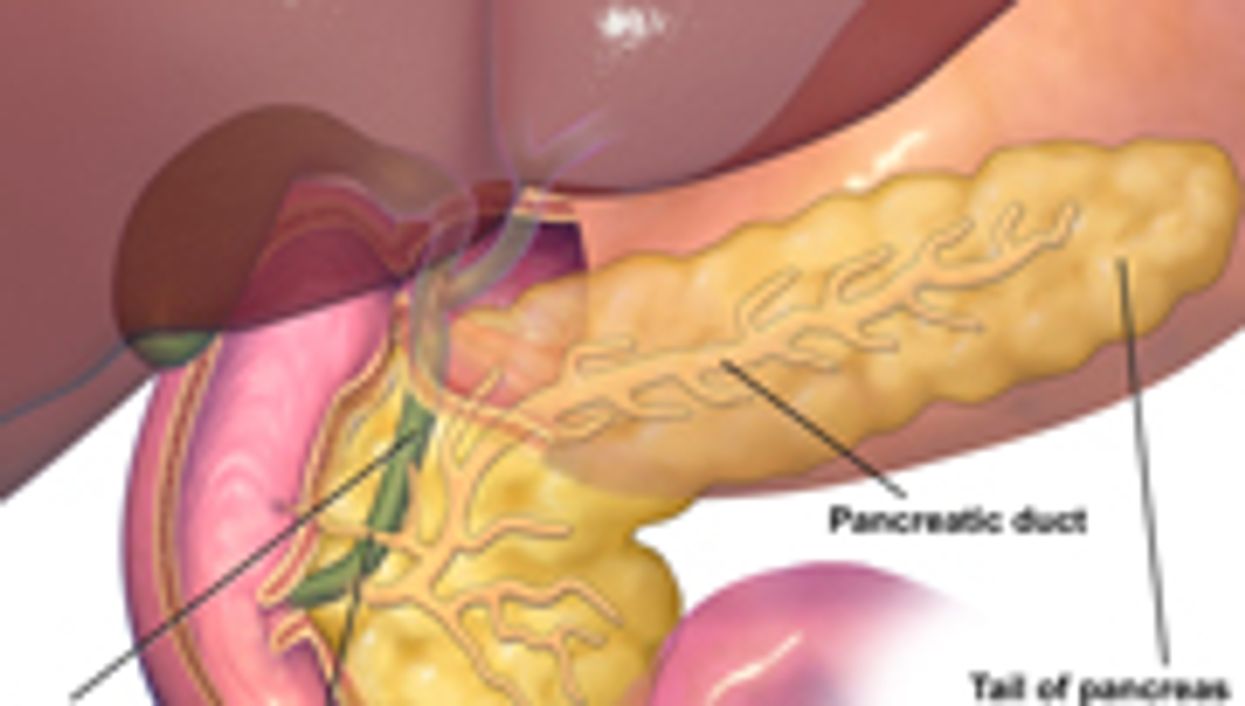 TUESDAY, May 22, 2012 (HealthDay News) -- Two preliminary studies suggest that some headway is being made in both the detection and treatment of pancreatic cancer.

On the treatment front, researchers from two Cleveland institutions said they have fashioned a vaccine that, in early trials, appears to kick-start the patient's immune system into attacking cancer cells.

The team -- from Case Western Reserve University School of Medicine and the Seidman Cancer Center at University Hospitals Case Medical Center in Cleveland -- stressed that the vaccine (called Algenpantucel-L) is not designed to prevent disease from occurring in the first place.

Initial testing, however, indicates that when used in conjunction with a standard six months of chemotherapy (with or without radiation) and surgical interventions, the vaccine may prolong short-term, disease-free survival, and perhaps even overall survival.

"We are eager for the outcome of the phase III trial of the Algenpantucel-L vaccine," she said. "The phase II results are very encouraging, and the ongoing larger-scale, randomized phase III trial will determine the effectiveness of this novel treatment strategy."

On the detection front, a separate team of researchers from the Mayo Clinic in Jacksonville, Fla., said it has come up with a novel and minimally invasive method to screen for signs of pancreatic cancer at a much earlier stage than is currently possible.

Instead of standard image scanning or biopsies, the experimental method, called "polarization gating spectroscopy," uses a small fiber-optic endoscopic probe configured with a light to explore regions near to, but much more accessible than, the pancreas itself.

The goal: to spot telltale signs of regional blood vessel and blood oxygen changes that scientists view as indicators of adjacent pancreatic cancer.

Both studies are scheduled for presentation at the international Digestive Disease Week meeting this week in San Diego.

According to the U.S. National Cancer Institute, more than 37,000 men and women will die of pancreatic cancer in 2012.

Treatment obstacles are significant, given that tumor growth often festers under the radar, leaving most patients with a late-stage diagnosis when treatment options are of limited value.

And although encouraging, both of the new studies share an important caveat: Each involved just a small group of patients.

"Although now we already have under way a larger trial involving 700 patients at 50 cancer centers," added Hardacre, a surgical oncologist at University Hospitals Case Medical Center and an associate professor at Case Western. "And the results of that trial, which will probably be available in a couple of years, will provide a definitive yes or no as to whether this therapy will improve survival."

"But already," he continued, "we have seen that if you compare the patients from our study to patients treated in the past with the same type of standard therapies but without the vaccine, our patients had notable improvement in terms of survival."

Hardacre said standard treatment typically affords disease-free survival of roughly 11 months. By comparison, add in the Algenpantucel-L vaccine to surgery and chemo prolonged survival among his patients to the 14-plus month mark.

"That's a large difference in percentage terms, although our work so far looked only at disease-free survival, not overall survival," he said. "Overall is the most important parameter, so that is what we are looking at now."

Dr. Michael Wallace, the lead author of the detection study, said his team's findings are a cause for guarded optimism: a 100 percent success rate in spotting pancreatic cancer using the light-screening method.

The approach does, however, yield a significant number of false-positive results. What's more, the findings stem from an analysis of very early data concerning just 21 patients in a 30-patient pilot study.

"So now we plan to launch a 600-person trial across the U.S. and Europe in late summer to validate our findings regarding a novel diagnostic concept: to shine a light on the small intestine, as opposed to the tumor itself, and to see how that light bounces back and reveals changes in the surrounding blood supply that tumors need to grow," said Wallace, Mayo's chairman of the division of gastroenterology.

"The beauty here is that this is minimally invasive, and will hopefully help us to shift to early detection," he said. "Because, as things are today, the vast majority of patients are diagnosed way too late and simply cannot be cured."

For her part, Matrisian said only time will tell how effective the new detection method might be.

"The intestinal probe is an interesting concept and further work will determine whether this will be useful in the early detection of pancreatic cancer," she said.

Because the studies were presented at a medical meeting, the data and conclusions should be viewed as preliminary until published in a peer-reviewed journal.

For more on pancreatic cancer, visit the U.S. National Library of Medicine.