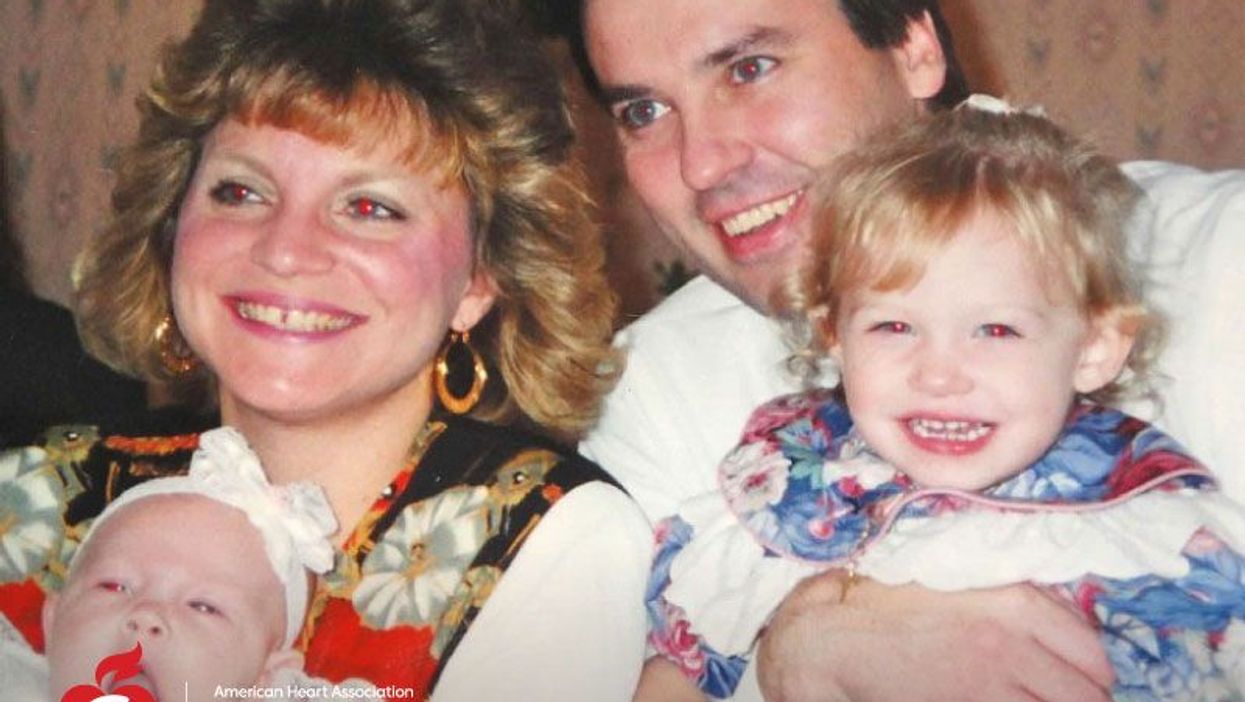 Gerard Blaney with his family, decades before he had a heart attack. Photo: Blaney family
HealthDay News

FRIDAY, Oct. 19, 2018 (American Heart Association) -- Gerard Blaney figured his excruciating headache was simply due to a combination of too much stress and too little food. It was budget season at Einstein Healthcare Network in Philadelphia, and as the network's chief financial officer, his entire lunch that day in April 2016 consisted of a single pretzel.

He arrived home that evening hungry, hurting and harried.

Hoping food would help him feel better, the couple and their then-23-year-old daughter, Chelsea, headed to a restaurant. But as soon as they were seated, Gerard put his head down on the table. His bad headache was worse, he was sweating and the burning that had been in his chest was now in his throat. Before they could even place their orders, he told his family that he needed to go home.

Although Gerard had driven to the restaurant, he handed the keys to Mariann and climbed into the back seat to lie down. Mariann figured he was suffering from an allergy-related headache and prepared to drive home.

"Mom, whatever you do, don't go home," Chelsea whispered.

Chelsea suggested going to a hospital. Mariann agreed. Gerard did, too, but on one condition: The only place he would go was Einstein, where he'd worked for 35 years. But it was 40 minutes away.

Mariann agreed, although she also formulated a Plan B.

Fortunately, the backup plan was not needed. When they arrived, a team of health professionals was waiting, and they whisked away her husband.

Cardiologist Dr. Lynn Morris evaluated Gerard and broke the news to him. He was having a heart attack.

"I'm not having a heart attack," Gerard said.

Even though an older brother had recently had a heart attack, Gerard didn't consider himself at risk. He never smoked and rarely drank. He exercised regularly and had been taking cholesterol-lowering medicine for years. Plus, he wasn't experiencing typical heart attack symptoms such as arm or chest pain.

"It was probably hard-headedness on my side," he said. "When they're going to rush you right into the emergency room and you're only 59 years old and think you're in pretty good health, it's hard to accept that you're having a heart attack."

Morris found the "culprit artery" and was able to open the blockage. In doing so, he noticed more disease in another artery, prompting coronary bypass surgery days later.

About three weeks after the heart attack, Gerard was back at work, though in a limited capacity. Soon after, he was able to attend the graduation of his younger daughter, Cailin, from Penn State University.

Today, Gerard exercises more and tries to eat better, opting for turkey burgers instead of hamburgers. And while he is still swamped with work, he's picked up one additional responsibility: chair of the Philadelphia Heart Walk on Oct. 27.

Gerard said the information he's received preparing for the American Heart Association's flagship event has helped not only him, but his extended family as well. Now he hopes to help others remain heart-healthy, too.

"The big moral of the story is, if you have symptoms and aren't feeling right, you have to get to the doctor," he said.