AHA News: With Help, Boy's Dreams of Flight Get to Soar Despite His Heart Issues 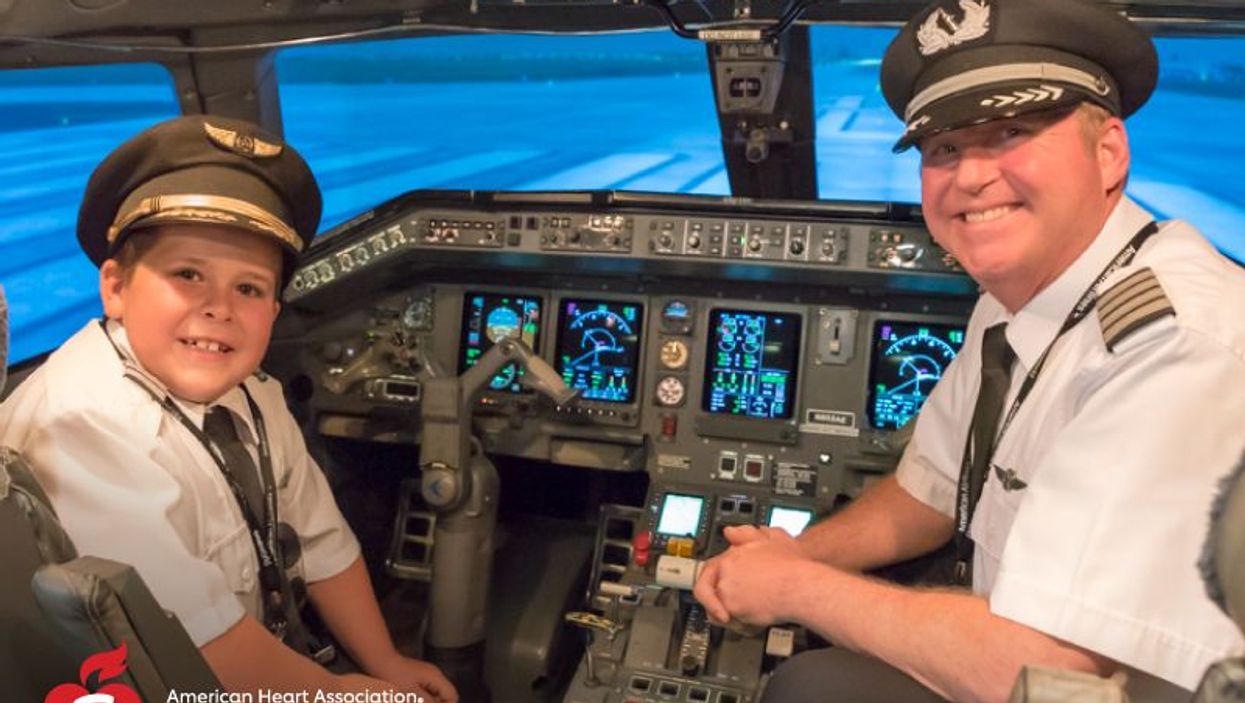 MONDAY, July 22, 2019 (American Heart Association News) -- As soon as he could walk, Easton Fryer bolted into his backyard whenever he heard an airplane flying over his home in Hamilton, Montana.

His second birthday party was held at the Ravalli County Airport. His first flight came months later. He's since flown in a two-seater and a helicopter. After his first commercial trip, the crew let him announce over the loudspeaker, "This is your captain speaking."

So when his elementary school held Career Day earlier this year, Easton of course put on his pilot outfit and talked about his favorite subject.

His mom, Sarah Fryer, posted a photo on Facebook. A friend who works for American Airlines shared it with Ric Wilson, the vice president of flight operations for Envoy Air, the regional subsidiary formerly known as American Eagle. Wilson noticed Easton lacked wings and epaulets.

He wanted to send them to the boy. A call seeking the family's mailing address led to Wilson learning something even Easton doesn't realize: Heart problems may prevent the boy's dream from ever taking off.

Easton was born with a hole in his heart that never closed. It was fixed with an operation when he was 5 1/2, but while doctors were making the repair, they found a bigger problem: a pinching of his aorta that restricts blood flow. He may need an operation as soon as next year. His parents have been told to brace for more as he gets older.

"The long-term stability is what's unclear," his mom said. "We just don't know whether flying will be part of his future."

Based on that, Wilson decided to send Easton more than swag.

Over a video call to the boy's second-grade class, Wilson invited Easton to American Airlines headquarters to become a "pilot for a day."

On July 12, Easton toured the company's museum and the main operations center, American's equivalent of NASA's mission control. He then had the highlight of his young life: More than an hour at the controls of the same flight simulator used to train Envoy pilots.

"This is going to be like flying a real airplane," Wilson told him. "You ready to do that?"

Easton enjoyed three rounds with multiple takeoffs and landings of an ERJ135 model aircraft. Sitting in a captain's seat pushed way up so his feet could reach the rudder pedals, he put the simulator's hydraulic system to good use, pitching the capsule forward and rocking side to side.

"I feel like we're going in the atmosphere!" he said during one faux flight.

Easton was fascinated by the notion of stalling the jet. Instructor Justin Harris gently reminded him that pilots always aim to land safely. Still, after a normal landing, Harris dialed up single engine failure.

"Nicely done, captain," Harris said from the co-pilot seat following Easton's safe landing with only one engine. "I'd fly with you any time."

"Can I do it with no engine?" Easton said.

Recalling his own childhood ambition to be a pilot, Harris couldn't resist. For Easton's final flight, the instructor punched in double engine failure with turbulence. To the boy's delight, the plane stalled on the way down.

"It was even better than I expected," Easton later said.

Easton turns 9 in September. He can't take flying lessons until he's 16, which means there are at least seven more years for research to generate a procedure or medicine that could keep his career aspirations intact.

As of now, his heart problems don't limit him – well, except for a June cardiology appointment costing him a day of flight camp. His doctor found a borderline case of hypertension. That is typical for his condition, which is called coarctation of the aorta, the narrowing of the large blood vessel connected to the heart. He also has some thickening of his left ventricle.

"We'll be back in six months to see where we are," his mom said. "They're trying to hold off on the surgery as long as they can. If they address it now, they might have to do it again in a few years as he grows."

Easton has another issue, too. His aortic valve has two leaflets (bicuspid) instead of the usual three (tricuspid). This is a common congenital heart defect. Doctors said it probably won't need to be fixed until he's in his 40s, if at all.

Easton is present whenever his parents and doctors talk, so he's heard words like "coarctation" and "bicuspid." He's just too young to grasp that these terms may limit him to a career on the ground.

For now, he'll keep dreaming about stalls and engine failure, while his parents dream about new technologies and medicines that could one day turn their son into a pilot.