See What HealthDay Can Do For You
Contact Us
December 16, 2009

Sarah Reinertsen has run marathons, competed in triathalons and appeared on The Amazing Race 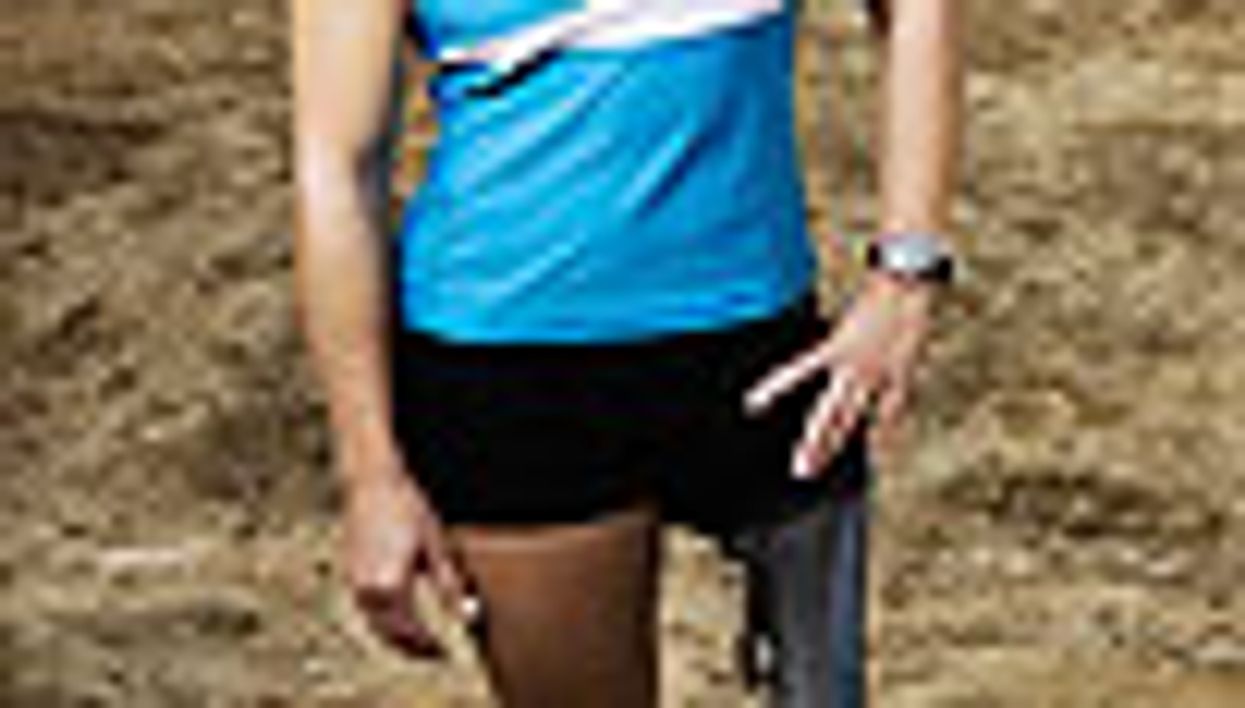 A one-legged girl in a two-legged world is how the 34-year-old triathlete likes to describe herself. When she's not training for a marathon, you can find her speaking to packed school auditoriums or posing nude with her metal leg crossed over her bare right leg on the cover of the latest ESPN Body Issue.

She is the first female amputee to win an Ironman competition. She climbed the Great Wall of China and scaled a giant cliff in Vietnam during the 10th season of the CBS television show The Amazing Race. And when she's not running or biking or swimming, she's trying on artificial limbs to test the latest body armor for a company that makes prosthetics. She also rallies soldiers who have lost their limbs to war. She is a hometown hero talking to runners who have known her since she was an 11-year-old who climbed into a sneaker and began running for her life.

Now, the California resident tells her story in a new book, In A Single Bound. Born off-balance in the world with a leg that would never catch up to the rest of her, the non-hereditary birth defect is called proximal femoral focal deficiency. Reinertsen just wanted to fit in; a hard thing to do when it was decided that her leg had to be amputated at the age of 7. When she saw her peers signing up for soccer, she begged her mother for a uniform and a chance to play. And while her parents shunned the word "can't" in their home, there wasn't much they could do from the sidelines when the coach sent her off alone to kick the ball against a wall. It would become a metaphor for her life, a message that echoes in virtually everything that Reinertsen sets out to do. Young people must achieve their goals no matter what anyone tells them to do, she stresses.

At 11, she found her game. Reinertsen was at a local 10K race with her father and brother when she watched an athlete sprinting by with an artificial leg. "I couldn't believe what I was seeing, what I realized was possible," Reinertsen said. She went home and put that sneaker on, and taught herself how to run. Pretty soon, she had a coach and was winning medals for short-distance relays. By the time she was 16, she was competing in the Paralympics in Barcelona. She tripped at the gate and was so defeated that she went home and put her sneakers away for two years.

"I went through a long time not being comfortable in my skin," she said. By her second year of college at George Washington University, she realized she missed running and turned her sights to marathons. "Running taught me to see my body as whole," she said. The prize was running in the 1997 New York City Marathon. Her coach ran by her side hugging one of his student's extra legs. She got to the finish line 6.5 hours later.

As an athlete, Reinertsen found faith in where her body could go. The year of the marathon, she met a man without a leg who was heading out to Hawaii to do an Ironman competition. Reinertsen loved to watch the race on television, and it became an instant obsession. There were only two problems. While she had the running part of the race down, she had no idea how to bike and any swimming she had done was spent on her belly in the Long Island Sound as a kid.

But she was up for the challenge. She started with the bike, learning how to ride in her Brooklyn apartment. Swimming was more challenging. There was a swimming pool a few blocks from her house. But every day she would get off the subway and find people staring at a one-legged man begging on a subway platform. That strong image made it impossible for her to think about going to the pool, shedding her metal leg, and diving in. Instead, she would take a detour on the way home and crash on the couch with a pint of Ben and Jerry's ice cream. That daily routine lasted a year. She talked herself into heading back to the pool, 15 minutes at a time for another year. A move from New York to California made it easier to train outdoors. By 2004, she was on her way to Hawaii. She was 12 years in training.

Reinertsen's endurance was not lost to the race, even though she was handed an exit slip when she missed the window for the biking leg by 15 minutes. Her unfinished business led her back to the Ironman challenge a year later, when she finished in 15 hours, 5 minutes, and became the first woman with a prosthetic leg to win the coveted triathlon. "There were 400 two-legged people behind me," Reinertsen said. "It felt great."

A year later, she was asked to audition for The Amazing Race and won a spot on the world tour. Reality show regulars got to know Sarah Reinertsen through her adventures in China, Mongolia, India, Vietnam and Kuwait. The race ended for Reinertsen and her partner in Kuwait when they got lost and ended up in the throes of a mob of people watching a beheading.

Reinertsen graduated with a degree in broadcast journalism, produced a television show on Olympic athletes, worked for the Challenged Athletes Foundation, which is an organization that supports athletes with disabilities, and for a company that builds prosthetic equipment. These days, she has a busy career as a motivational speaker and often lends her body to test future generations of artificial legs. She also spends time visiting amputees at Walter Reed Army Medical Center.

"My voice as an advocate for people with disabilities is breaking down walls, showing people that everyone has challenges that can be overcome with passion and hard work," she said.

For more on proximal femoral focal deficiency, go to the Association of Children's Prosthetic-Orthotic Clinics.