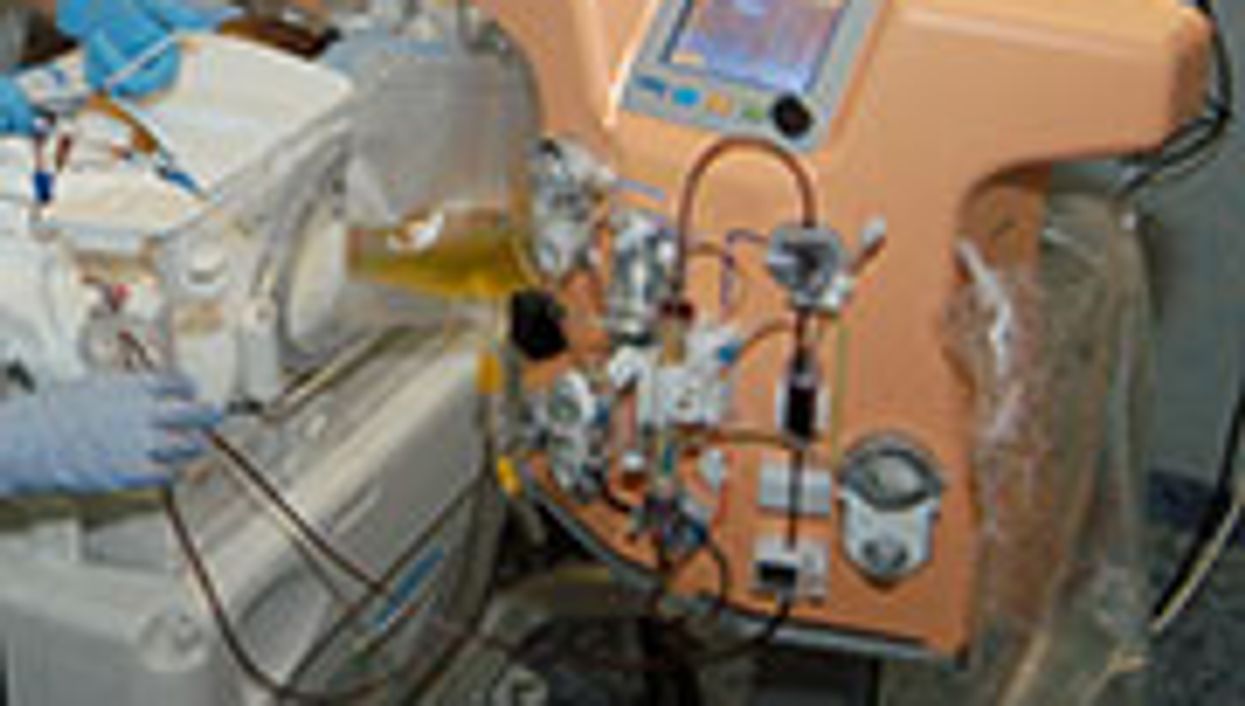 "We have developed a machine for neonates [newborns] who were not treatable before," said lead researcher Dr. Claudio Ronco, director of the department of nephrology at San Bortolo Hospital in Vicenza.

"The neonate is so small that it requires dedicated technology," he said. "To try to treat the patient with an adult machine is like trying to fix a watch with a tool that you use for a large car."

Adult-size dialysis machines can be modified for use with children. But, the machines are difficult to use in infants because they can overpower an infant's tiny blood vessels, the researchers said. And, the machines generally can't be used on babies under 6.6 pounds or so, according to Dr. Ana Paredes, a pediatric nephrologist at Miami Children's Hospital.

The advantage of the new machine is that it can handle very low blood flow and filtration, and it uses tiny catheters that protect the infant's blood vessels. In contrast, adult machines are designed to handle much higher blood flow and use much larger catheters.

The report was published in the May 24 issue of The Lancet. Funding for the study was provided by the Association of Friends of the Kidney Vicenza.

Ronco's team tried the miniaturized dialysis machine for the first time in August 2013. The first patient was an infant weighing only 6.3 pounds. This infant had multiple organ failure after a complicated delivery.

"This baby was dead -- it was considered dead," Ronco said. Without this machine, it was doubtful that this baby could have been treated, he added.

After more than 20 days of dialysis with the new device, the infant was taken off the machine when kidney function had been restored. The baby left the hospital after 50 days, the researchers said.

"To stay at the bedside of this baby with the machine we developed was to rediscover why I do medicine. It was satisfaction for 40 years of effort," said Ronco.

Since this first use of CARPEDIEM, 10 more infants have been treated successfully with the device in Europe, Ronco said.

Ronco hopes to present the new technology to the U.S. Food and Drug Administration for approval. "There is definitely an interest in the United States for this machine," he said.

Dr. Benjamin Laskin, a pediatric nephrologist at the Children's Hospital of Philadelphia and author of an accompanying journal editorial, said when adult dialysis machines are used, they have to be "jerry-rigged to make them work."

"Having a machine designed for infants is certainly an advantage," he said.

Laskin and his co-author wrote that more study is needed on the CARPEDIEM machine to ensure that it's an effective option for infants who need dialysis.

Paredes, who is also director of the Dialysis Unit Program at Miami Children's Hospital, is excited about the potential of this new device.

"This is a tremendous development," she said. "I look forward to using this machine in the U.S."

For more information on dialysis, visit the U.S. National Library of Medicine.