But there's a long way to go to make this approach practical, experts say 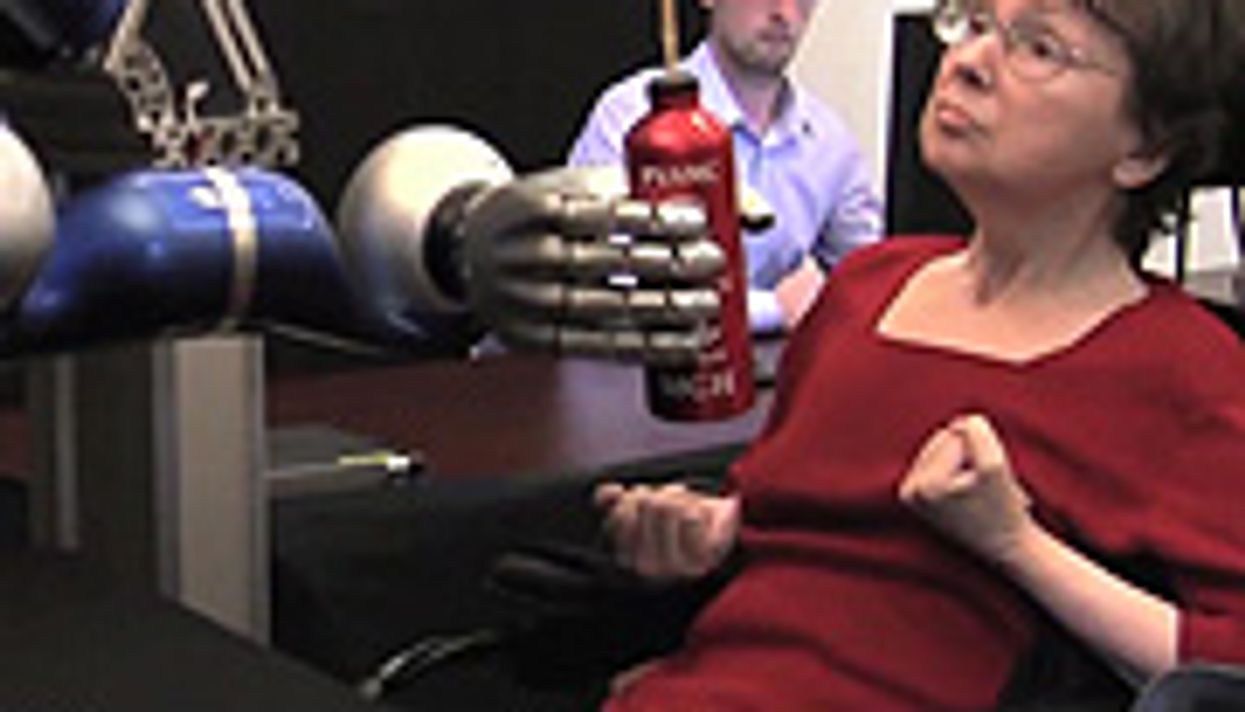 WEDNESDAY, May 16, 2012 (HealthDay News) -- Two stroke patients who had lost the use of their arms and legs were able to use their brains to move a robotic arm, researchers report.

In fact, one patient was able to use the arm to grasp a thermos of water, bring the thermos to her mouth and sip from a straw on her own.

"It's the first time she reached out and picked up anything in 15 years," said researcher Dr. Leigh Hochberg, an associate professor of engineering at Brown University and the Department of Veterans Affairs, both in Providence, R.I., and critical care neurologist at Massachusetts General Hospital in Boston.

Patients do this "just by thinking about moving their arm and hand," he said.

"The real dream for this research is for people with paralysis to one day reconnect their brain to their own limbs," Hochberg said. "These are still the early days of the research, and there's a lot more research to be done."

The report was published in the May 17 issue of the journal Nature.

What is making this possible is an investigational device called the BrainGate neural interface system, which puts robotics under the brain's control.

The system uses a sensor to monitor brain signals and computer software and hardware to turn these signals into commands to move the robotic arm, the researchers explained.

The sensor is a tiny square of silicon about the size of a baby aspirin that contains 100 hair-thin electrodes that record the activity of small groups of brain cells. It is implanted into the motor cortex of the brain, where physical movement is directed.

"With that sensor, we are able to record dozens of single brain cells. We then decode that activity we are recording," Hochberg said.

The patients are asked to try to move their arm or imagine moving their arm and researchers record the brain activity and build a map of that activity, which is converted into a computer program that allows the robotic arm to move when the patient thinks about moving the arm, he explained.

The two patients were a 58-year-old woman and a 66-year-old man who can't speak or move their arms or legs because of strokes they had years ago. The woman had hers in 1996, and the man had his in 2006.

In the trial, both learned to perform complex tasks with a robotic arm by imagining the movements of their own arms and hands, Hochberg said.

"In the future, we will record the brain in more than one place, to extend the movements, and as the research continues the movements will become faster and more natural," Hochberg said.

Andrew Jackson, a research fellow at the Institute of Neuroscience at Newcastle University in the United Kingdom and author of an accompanying journal editorial, said that "it would be nice that these devices would allow paralyzed patients to move their own limbs."

Jackson also thinks this approach could be integrated with efforts to restore function through nerve regeneration.

"It may well be that some of these technologies may turn out to be important ways of rehabilitating a system. So, the two may be complementary," he said.

"Progress is being made," Jackson said. "What was science fiction 10 years ago is now starting to make translation into patients, but there is still a long way to go and hurdles that need to be addressed before it becomes a clinically useful device."

Another expert, Dr. J. Marc Simard, a professor of neurosurgery, pathology and physiology at the University of Maryland School of Medicine, noted that "this is a baby step, but a solid step."

There is tremendous hope for future development of this technology but it's not around the corner, he said.

"This is not going to happen tomorrow, whether it happens in [the patients'] lifetimes would be surprising," Simard said. "But knowing it is out there and these steps are a reality has to give one hope."

For more on paralysis, visit the U.S. National Library of Medicine.