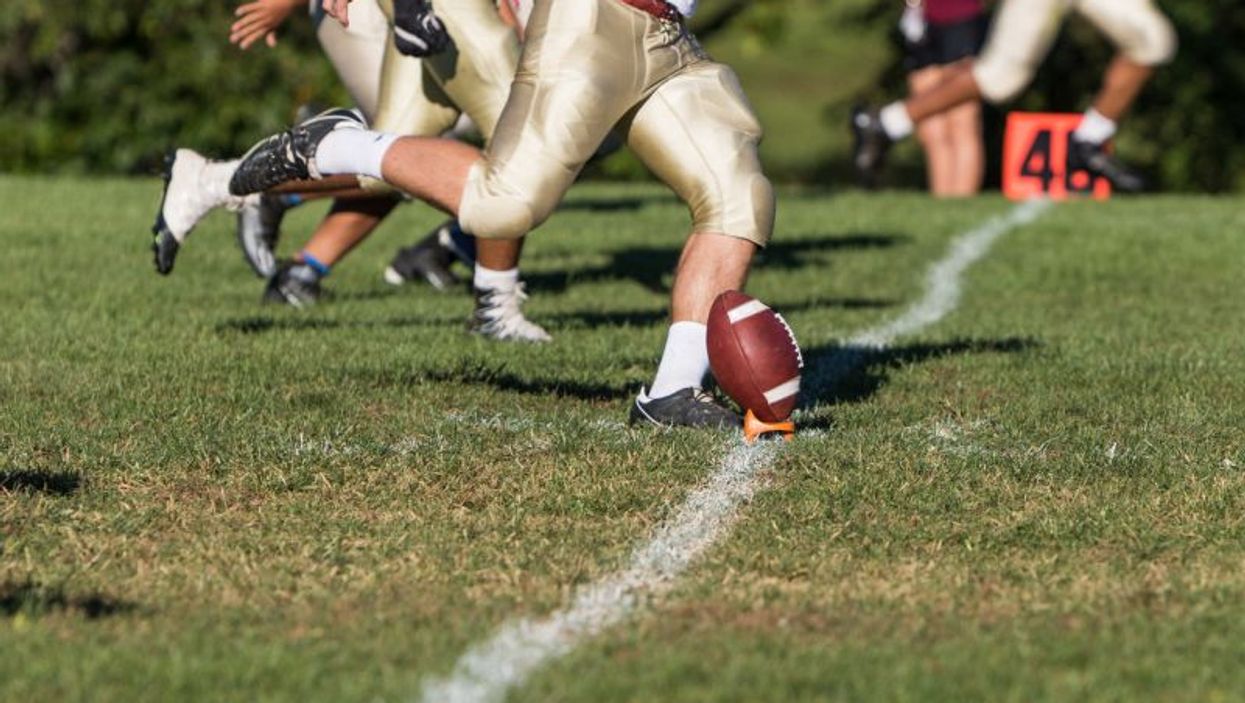 TUESDAY, Oct. 2, 2018 (HealthDay News) -- The most dangerous play in football can be rendered safer through a simple rule change, a new study out of the Ivy League suggests.

Moving the kickoff line forward by just five yards -- from the 35- to the 40-yard line -- reduced the average annual concussion rate in Ivy League football by more than 68 percent, the study revealed.

"At the end of the day, the results are really quite compelling," Wiebe said.

Kickoff returns account for more concussions than any other play in football.

Statistics compiled by the National Football League (NFL) show that concussions are five times more likely to happen during kickoffs, ESPN has reported.

"Players on the receiving team have the time and space to get up to full speed running forward. Players on the team that just kicked the ball are running at full speed toward them," Wiebe said. "High-speed high-impact collisions are just quite likely to occur during this type of play, relative to other types of play."

Because of this, the Ivy League in 2016 decided to move the kickoff line forward five yards.

"The rationale is it would give the kickers a better chance for the ball to reach or go beyond the end zone," Wiebe said. "Players would be more likely to take a knee rather than move the ball forward."

Kickoffs happen frequently during a football game, including at the start of each half and after a scoring play.

But if the kicked ball goes past the goal line, the receiving team can decide to "take a knee" and down the ball in what is called a "touchback." Play then starts with the ball placed at a set position on the field, which in the Ivy League is the 20-yard line.

Ivy League coaches asked for the kickoff line to be moved forward, likely with the idea that more kicks would go past the goal line and more ball receivers would take a touchback instead of running the ball forward, said co-researcher Bernadette D'Alonzo, a clinical research coordinator with Penn Injury Science.

Results from the 2016 and 2017 seasons show that the rule change paid off, the study authors noted.

Kickoff plays resulting in a touchback increased from an average 18 percent annually to 48 percent after the rule change, meaning fewer instances of high-speed collisions, the researchers reported.

To make sure this was the result of the rule change, the researchers compared kickoffs to a control group consisting of all other football plays during the season.

"Over time, there was a small reduction in the rate of concussion in other play types, but after pulling that out and accounting for it, we still see that evidently the kickoff rule appears to explain there was a reduction in kickoff return concussions to the tune of 7.5 fewer per 1,000," Wiebe said.

The NFL already moved its own kickoff line forward in 2011, from the 30- to the 35-yard line, in an attempt to limit concussions, the researchers noted. One analysis concluded that the NFL's change reduced injuries overall but not head injuries, but the prior study did not compare kickoffs against all other play types.

The NFL is considering eliminating the kickoff altogether if it can't be made safer, ESPN has reported.

"This is a really great example of how this much-loved sport can be made safer," Dams-O'Connor said.

The rule change makes a great deal of sense, given how dangerous kickoff plays can be, said Dr. Michael Stuart, co-director of sports medicine at the Mayo Clinic, in Rochester, Minn.

"When I played football, we were taught on kickoffs on punts that you had to play with reckless abandon, complete disregard for personal safety," Stuart said. "You had to run as fast as you could down the field and knock anyone out of the way who was trying to block you, and try to be the first one to the kickoff returner and tackle them at high speed."

However, Stuart noted that even on touchbacks, the rest of the team still is running toward each other at full tilt until they get word the play has ended.

"Clearly, the kickoff returner is not at risk of concussion, but the other 21 players can still be involved in high-speed contacts. That's an important recognition," Stuart said, adding that any discussion of potentially abandoning kickoffs should weigh this fact.

The findings were published online Oct. 1 as a research letter in the Journal of the American Medical Association.

The U.S. Centers for Disease Control and Prevention has more about sports-related concussions.