See What HealthDay Can Do For You
Contact Us
December 12, 2007 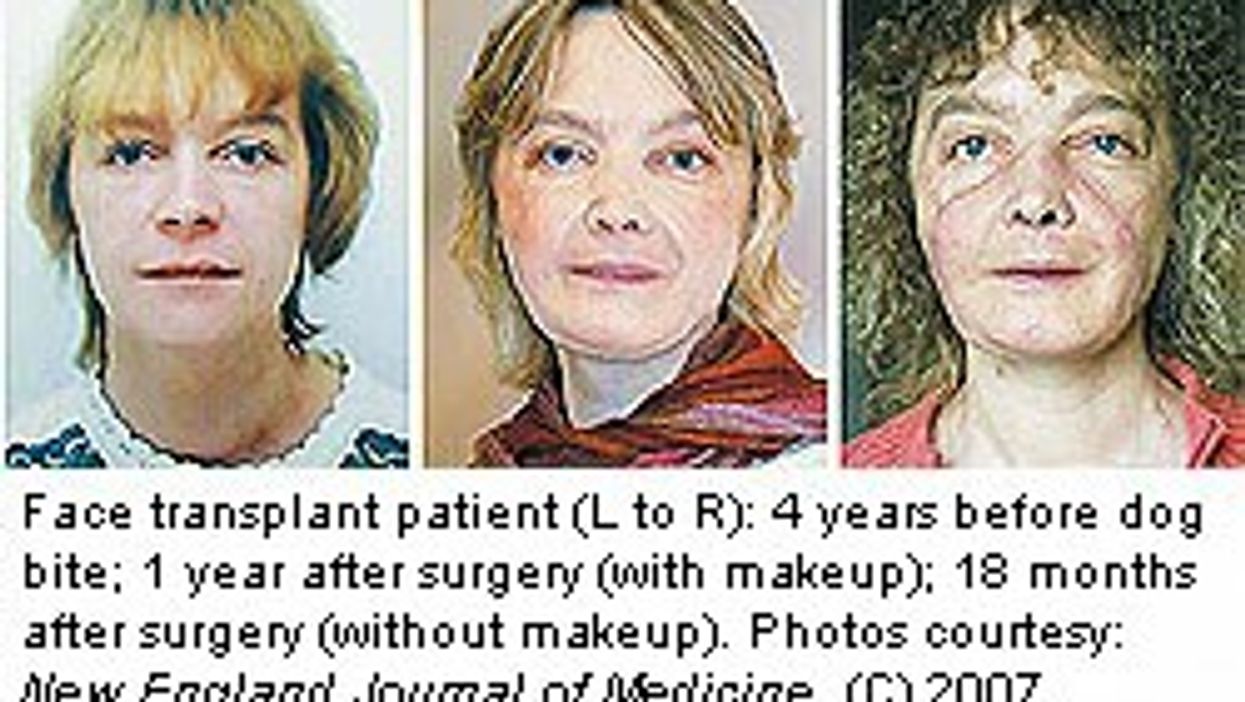 WEDNESDAY, Dec. 12, 2007 (HealthDay News) -- A 38-year-old French woman who underwent a partial face transplant after being mauled by her dog is eating, drinking and even smiling 18 months after the landmark surgery.

The surgery was the first ever partial face transplantation and, as such, continues to break new ground, both medically and ethically. In the Dec. 13 issue of the New England Journal of Medicine, the surgeons who performed the operation report on the woman's progress.

"There's a whole new technology of being able to transplant or transfer composite tissue, and that's one of the exciting new things, and whenever you're talking about pioneering efforts, you're talking about where does somebody go over the line," said Dr. Seth Thaller, chairman of plastic surgery at the University of Miami Miller School of Medicine. "It's crossing frontiers, and only time will tell."

The patient, Isabelle Dinoire, was attacked by her dog in May of 2005, resulting in the amputation of part of her nose, both upper and lower lips, her chin and parts of both cheeks.

Controversy had already surrounded the surgery when it was first reported at the end of 2005.

There were allegations that the woman had attempted suicide by overdosing on pills the night her dog mauled her.

And the lead doctor, Jean Michel Dubernard, was reported to lead a double life as a politician, a former deputy mayor of Lyon, and one of the most powerful members of the French National Assembly. Dubernard, a chain smoker, gained notoriety after he transplanted a new hand to patient Clint Hallam in 1998. It was later revealed that Hallam had lost his hand while serving time in prison.

Dubernard and his team grafted a nose, lips and chin onto the woman's face on Nov. 27, 2005, in Amiens, France. The donor was a brain-dead, 46-year-old woman with the same blood type as the patient.

Although a face transplant is not technically a lifesaving procedure, recipients still need to take immunosuppressant drugs to prevent rejection, as this woman did.

By the end of the first week post-surgery, the woman was able to eat and drink almost normally, her doctors reported. There was some initial leakage from her mouth but this was resolved by the end of the year.

The woman also regained sensitivity to light touch and to heat and cold.

Recovery of motor functions was slower, but, by the end of the 12th week following surgery, the woman could partially move her upper lip. She regained the ability to move her lower lip after the fourth month. And she was able to completely close her mouth 10 months after surgery, improving her ability to pronounce words and letters.

The woman's smile remained lopsided up to the 10th month after surgery but was normal at 18 months.

The patient did experience two rejection episodes, both of which were successfully reversed. There were also two infectious complications, both of them were also resolved.

According to the NEJM report, by the end of the fourth month after surgery, "the patient was capable of facing the outside world and gradually resumed a normal social life. . . At present, the patient says she is not afraid of walking in the street or meeting people at a party, and she is very satisfied with the aesthetic and functional results."

"My sense is that she's at a lot higher risk for having more trouble later on [for example, skin cancer]," said Dr. David Arnold, an assistant professor of otolaryngology and head and neck surgery at the University of Miami Miller School of Medicine. "Do you get immunosuppressed and [undergo several procedures] and potentially shorten your life for a cosmetic outcome. That's the glaring angle of all this. Technically, it's an amazing accomplishment."

The paper did not address the issue of identity after receiving what essentially amounts to a new face.

According to the study author, two other face grafts have been performed (one in China in 2006 and one in France in 2007), but information is not available on those.

The Cleveland Clinic has permission to perform a full face transplant, but, according to Dr. Maria Siemionow, head of plastic surgery research, "We still are screening patients, working in the laboratory on anti-rejection therapies and searching for a donor."

For more on reconstructive surgery, see the American Society of Plastic Surgeons.