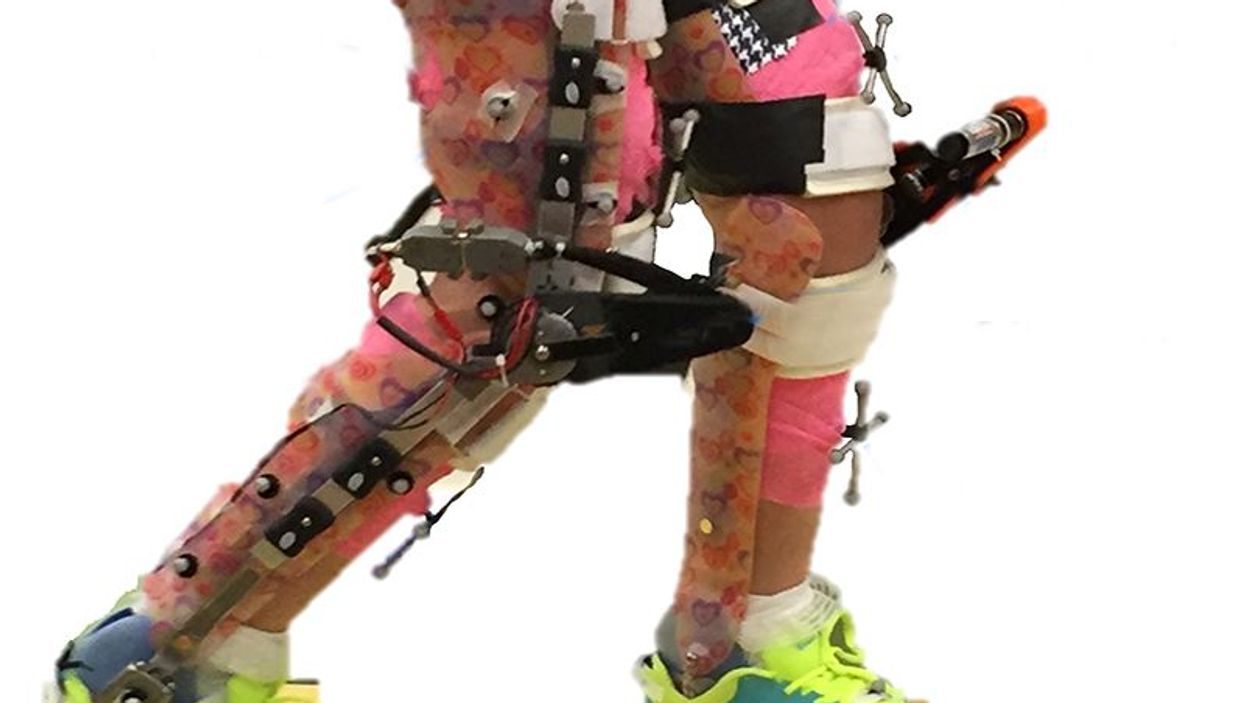 Cerebral palsy is a lifelong disorder, characterized by impaired motor function and muscle control. By adulthood, half of those with cerebral palsy no longer walk, often because of a crippling gait pattern.

Enter the motorized exoskeleton, which aids knee extension at specific points of the walking cycle.

But these treatments are "unable to prevent the debilitating loss of walking ability for many children with cerebral palsy," added Lerner, an assistant professor of mechanical engineering at Northern Arizona University.

Many of these children bend their knees excessively when walking. This pattern of "crouch gaiting," as it's called, can become so disabling that walking unassisted is impossible.

The exoskeleton, Lerner said, is a first step toward helping kids overcome crouch gait. It does this by enabling better knee movement and lower-leg extension in a "normal" open walking environment, he said.

The motorized aid is "designed for children who are unable to walk in an upright posture, working in synergy with the child's own muscles to help them achieve a more normal gait pattern," he said.

Damage to the central nervous system during early development causes cerebral palsy. It affects 764,000 children and adults in the United States alone, according to the Cerebral Palsy Foundation.

For the new study, seven children with cerebral palsy, aged 5 to 19, had an exoskeleton attached to the ankle and knee. The device is lined with sensors to monitor and adjust for joint torque, force and movement velocity. The combined weight (for both legs) is between roughly six and 10 pounds.

Participants underwent six training sessions. But six of the seven children walked without assistance during the first session, the researchers said.

No one fell, and the device was deemed to be safe, according to the report.

Most important, the study authors said, the device appeared to enable independent walking and spark posture improvements comparable to those seen with corrective surgery.

"We are highly encouraged by our findings," said Lerner. He added there was a "measurable training effect" whereby walking posture improved over time.

"While additional longer-term studies are needed, these results provide the first indication that exoskeletons may be a promising new treatment strategy to complement standard of care in this population," he added.

Currently, some patients engage in walking therapy that involves being tethered to a treadmill. That's of questionable benefit, said Lerner, and not an ideal replacement for free walking.

But with a price tag that he pegged at several thousand dollars, would this high-tech intervention be out of reach for most young patients?

"The proliferation of consumer robotic devices is helping to drive down the price for wearable exoskeletons such as ours," Lerner said. "If proven to be an effective long-term intervention tool, the cost of an exoskeleton may be justified considering the potential prevention of expensive medical procedures."

"Funding is always a challenge with any orthotic or piece of equipment, and especially those that are experimental -- because insurance doesn't pay," said Pieraccini, who is with United Cerebral Palsy of Central Arizona.

"We need to realize as a society that surgery or extensive therapy is equally expensive and painful for a child," she added.

As a therapist, Pieraccini said she would ask: "Does use of the robotic exoskeleton lead to a positive change in a child's gait patterns once the device is discontinued?"

If improvements to a child's neuromuscular system and motor patterns can prevent orthopedic complications leading to costly and extensive surgery, "then the cost is worth it," she said.

The study findings were published in the Aug. 23 issue of Science Translational Medicine.

There's more on cerebral palsy at the U.S. National Institute of Neurological Disorders and Stroke.