See What HealthDay Can Do For You
Contact Us
January 12, 2012 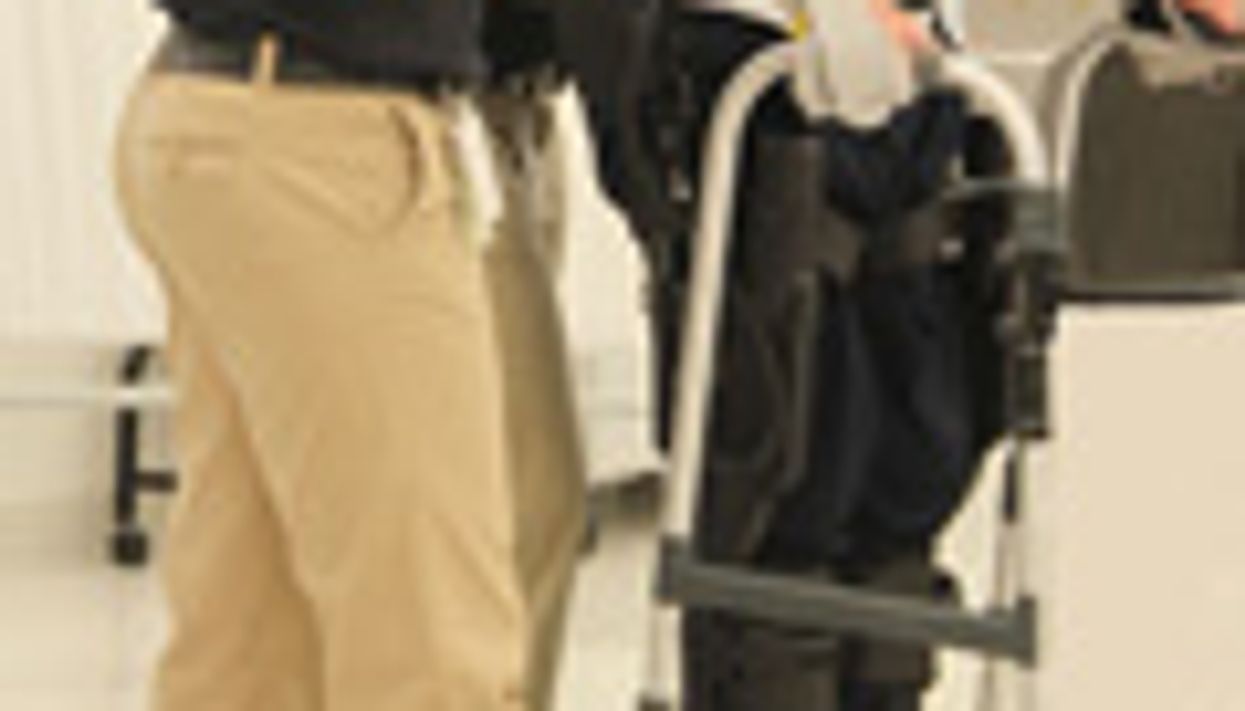 Rhode, then a member of the ski patrol for 13 years, wasn't able to regain his balance before hitting a fence. Now, tragically, he is paralyzed from the chest down.

But last October, 10 months after the accident, Rhode was able to walk again with the assistance of Ekso, a robotic "exoskeleton" that he and five other testers "wore" on their body during an initial trial, enabling them to stand up and even take steps.

"I was upright for an hour and 10 minutes and was actually walking for 31 minutes," said Rhode, 46. "It was such a positive feeling."

Ekso is one of just a few robotic "exoskeletons" giving paraplegics and quadraplegics something they may never have dreamed of before: the ability to stand and walk on their own again.

With the Ekso that Rhode tested, "the therapist controls the sit-to-stand and moving forward," explains Dr. Steven Kirshblum, medical director and director of Spinal Cord Injury Services at the Kessler Institute for Rehabilitation in West Orange, N.J.

All Rhode had to do was start pushing out of his wheelchair as he had done many times before and the Ekso, as manipulated by the therapist, did the rest.

Kessler, a leader in the field of disability rehabilitation, is one of 10 U.S. organizations partnering with Ekso Bionics to develop clinical versions of the device.

A clinical model is due out "very soon," said Kirshblum. That model will allow the individual patient to control the device, can be for home use and will have the ability to negotiate stairs, he said.

"This will occur via wireless communication between the crutches and the sensors on the exoskeleton, assuring the individual is in the appropriate position and is safe to undertake the movements," explained Kirshblum.

Ekso improves on other exoskeletons in that it doesn't use electrodes to stimulate the muscles. The problem with electrodes, Kirshblum said, is that the energy expenditure to get a muscle to contract is enormous.

With less energy required, Ekso's developers hope users can travel farther on their own.

Right now, Ekso is mainly intended for use in therapy settings, and researchers at Kessler and elsewhere will study its impact on bone strength, muscle, bowel and bladder function, blood pressure and quality of life.

Kim Anderson-Erisman, education director for the Miami Project to Cure Paralysis at the University of Miami Miller School of Medicine, envisions exoskeletons one day helping other types of patients, such as stroke survivors and people with traumatic brain injury or multiple sclerosis. "Anything that would lead to muscle weakness," she explained.

"This could potentially be something that they could use to help train, train their muscles and strengthen so that they might be able to eventually walk on their own," said Anderson-Erisman.

Of course, lots of research is needed first to see if exoskeletons actually help strengthen the muscles, she added.

Ekso should help people move, but will it prompt neurological recovery?

Kirshblum wasn't willing to say. But whatever its use, the price will have to come down considerably, said Anderson-Erisman.

Kirshblum also wouldn't say how much Ekso will cost, but one estimate put the price at $100,000.

"This would have to be something insurance would pay for and I don't think that's in the immediate future," said Anderson-Erisman.

This year, Kessler is embarking on a clinical trial with Ekso, a trial Rhode hopes to join.

"Hopefully, I'll be able to use it again," said Rhode, who has not used Ekso since October, when he was one of six adults, and the only quadriplegic, to test the device.

"I think it's going to be a great tool for therapy right now, to get people up and walking and weight-bearing," Rhode said. "Until possibly they do come up with a cure, it will keep people's legs strong."

The National Spinal Cord Injury Association has more on this type of trauma.