Changes in same gene cause a form of albinism in people, too 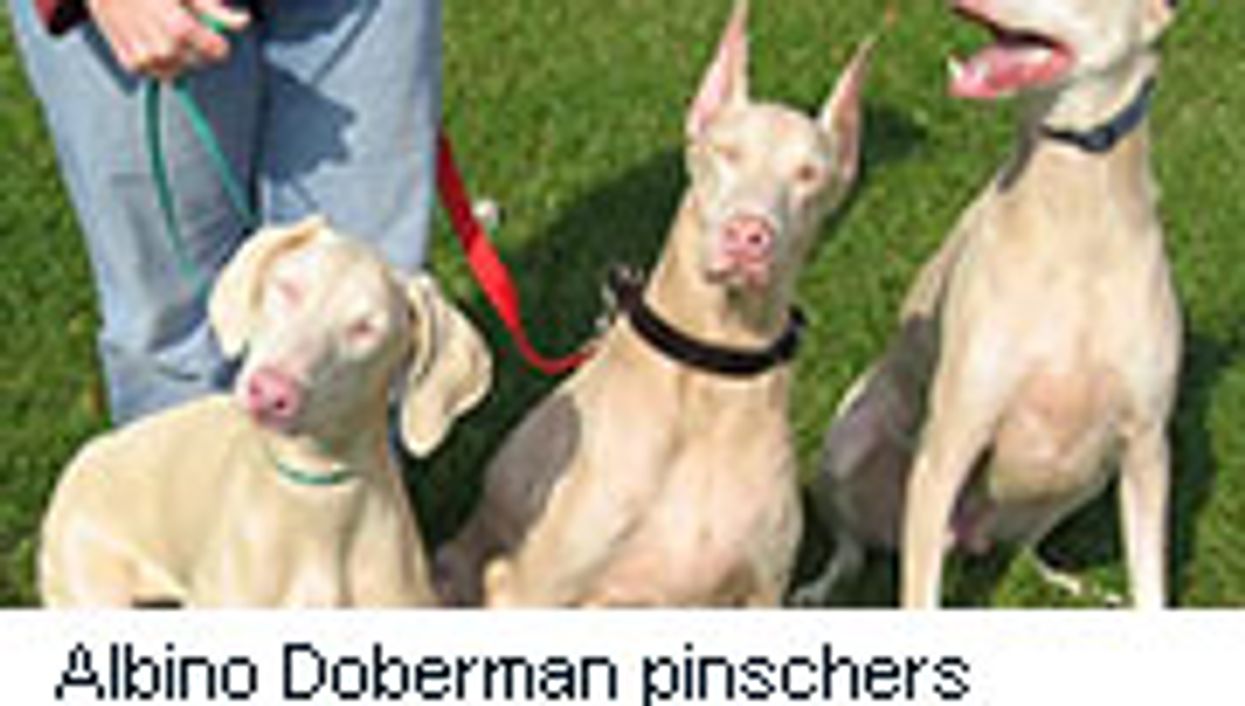 TUESDAY, May 27, 2014 (HealthDay News) -- Researchers report that they have discovered the genetic defect that causes albinism in Doberman pinschers.

Albinism refers to an inherited skin pigment disorder that causes light or white hair and very fair skin, according to the U.S. National Library of Medicine.

"With an albino Doberman, you see a white or lighter-colored coat, pink noses and lips, along with pale irises in the eyes," study co-leader Paige Winkler, a doctoral student in Michigan State University's College of Veterinary Medicine, said in a university news release.

"These traits are very similar to the characteristics humans display with this particular condition causing light-pigmented skin and hair, along with eye discoloration and vision disturbances," she noted.

Dogs with the gene mutation lack a protein needed for cells to have color, the researchers explained. Defects in the same gene are found in some humans with a specific form of albinism, according to the study published online recently in the journal PLoS One.

Doberman pinschers and people with albinism have the same skin sensitivity to sunlight, which increases the risk of skin cancer, the study authors noted.

"We knew that the albino Dobermans typically developed these types of tumors, much like humans, but we wondered what the actual increase in prevalence was between a 'white' dog and a regular-colored Doberman," study co-leader Joshua Bartoe, an assistant professor in the department of small animal clinical sciences, said in the news release.

"What we found was a significant increase in risk for development of melanoma-like tumors in the albino dogs," he noted. Melanoma is the most dangerous form of skin cancer.

The investigators studied 20 Dobermans with usual coloring and 20 albino Dobermans. They found that half of the albino dogs had at least one tumor, compared with only one of the regular-colored dogs.

Identification of the genetic mutation that causes albinism could prove important to Doberman breeders, the researchers noted.

"Because Dobermans can carry the defective gene, but show no signs of the disorder, this has posed serious problems among breeders," Bartoe said. "But now that we've identified the mutation, we can look at the genetic makeup of these dogs and determine if they might be carriers."

The U.S. National Library of Medicine has more about skin pigmentation disorders.