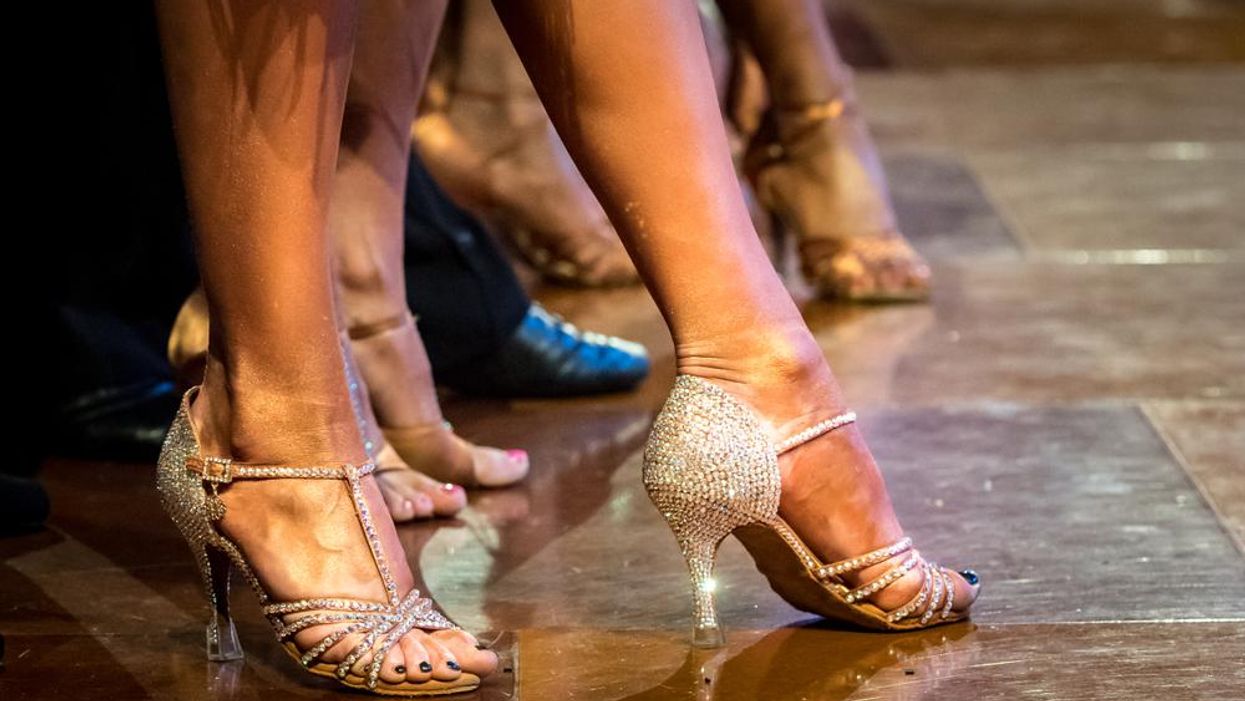 At 104, my great-aunt Lenore Schaeffer* was a sort of living legend. She appeared in Newsweek and on the Tonight Show with Jay Leno, but not only because she had outlived most of her peers and the average American. It's because she out-danced most of them too. Schaeffer was probably the oldest American competitive ballroom dancer. And she had a formidable collection of trophies and medals to show for it. "At 200 I stopped counting," she laughed when I talked with her, waving her hand dismissively.

Her passion for dance began at age 12 in her native Chicago. She was mesmerized by the expertise of one Harry Segall, "the best dancer at Jane Adam's Hull House," as Schaeffer describes the 16-year-old boy who would become her first husband. But when she remarried at 42, she packed her dance shoes away. Her second husband, Mike Schaeffer, was unable to dance for health reasons. At age 82, some time after his death, Schaeffer brought her shoes out of retirement -- and despite her failing eyesight -- went on to perform for audiences all over the country. ("I could see well enough to avoid the other dancers," quipped Schaeffer, who added that it helps to have a professional dance partner.)

So for those of you who feel that you're perhaps too old to learn new tricks (or dances), take heart: My great-aunt won her first awards for ballroom dancing in her 80s. At age 89, in fact, she took first place for the fox trot and waltz in the Victor Dru International Invitational contest in Las Vegas. She was named Outstanding Senior Dancer at the California Star Ball in 1987. At her 90th birthday celebration she entertained relatives by kicking up her heels with four handsome dancers half her age. She won her most recent trophy at the ripe old age of 101. And she's taken first prizes in a host of competitions all across the country, including those featuring rumba, mambo, cha-cha, and rock 'n' roll. She said she loved them all, "but if I had to choose, I'd say the Viennese Waltz is my favorite."

Never too old to dance

My great-aunt may have been older than many seniors but she was certainly not alone in her enthusiasm for dance. No one knows exactly how many older people put on their blue suede shoes, but it's a good bet that more of them are out on the dance floor than the younger generation suspects. While Gen Xers are sleeping off an all-night rave, their grandparents may well be line-dancing to "Achy Breaky Heart" at the local senior center. Many centers offer folk-dancing as well as ethnic dance, swing, and rock and roll -- and if you like to dance, you'll likely find yourself with plenty of partners -- or, in line dancing, without the need for one.

"One reason line dancing is such a hit among seniors is that there's no need for partners, so everyone is encouraged to give it a try," says Kelly Ferrin, a San Diego gerontologist and the author of What's Age Got to Do With It? -- Secrets to Aging in Extraordinary Ways. "The socializing that group dancing provides really benefits people -- it's less threatening than partner dancing, and being part of a big group breaks down isolation. And of course, it's tremendous fun."

Some cruise ships offer seniors "dancing vacations," and line up older men to serve as dance partners for women traveling alone. Salsa and Cajun dancing clubs count many seniors among their regular patrons, since clubs that feature partner dancing aren't segregated by age in the way that many others are. Seniors often find that many community centers offer dancing that caters to their age group.

In Skokie, Illinois, for instance, 74-year-old Bill Ogg regularly attends dances at the Oakton Community Center. He twirls his dance partner, Connie Mah, around the room, dipping her into a reclining position at the finale of a big band-era riff wafting out of a cassette player at the community center. "I think dancing should be fun and romantic," says Ogg, who sports a tiny sparkly earring in his left ear, pierced on his grandson's suggestion. "It's good exercise, without the boredom of aerobics."

On either side of them, six couples are dancing cheek-to-cheek or swinging their way across the dance floor. Among them is 84-year-old Robert Tucker, a retired professor and dance aficionado. The only thing that ever kept him off a dance floor, he says, was his height. "Growing up, all the girls were taller than me," he recalls. "I could dance as well as [the other guys], but I couldn't break in." That changed during World War II, when he was based in Washington, D.C. "At that point there was an excess of girls, because all the guys were away in the service," says Tucker, who recalls having a field day on the floor.

Tucker now dances three times a week at different venues, and he and the woman he ended up marrying used to spend their vacation time taking dancing cruises with their children. Even at home, a romantic tune will often usher in a lovely interlude in the daily routine. "My wife will be in the kitchen, she'll hear a waltz playing and come and dance with me."

The mood at the community center is relaxed and convivial, and the other dancers are glad to talk about their favorite past time. "I like cha-cha," says Shirley Astor, 78. She nods at her husband Chuck. "He likes everything." "Did I give you permission to talk for me?" he protests good-naturedly. Beside him, Morrie Cardon, 79, who began dancing after his wife passed away, explains his philosophy. "People who don't dance are missing something, like hugging and kissing," he says. A Glenn Miller tune plays in the background. "The music makes you fantasize: girls in flowing gowns... "

While Cardon and his fellow dancers are out there having fun, they may also be getting healthier. Some older people think that exerting themselves through dance or other exercise is bad for them, but in most cases, the opposite is true. If people fail to exercise, they become frailer and lose strength and flexibility, according to the National Institute on Aging. Dance can increase flexibility and strengthen muscles, and helps people develop a sense of balance that helps ward off falls and injury. Regular exercise, including dance, can also help prevent or control certain illnesses, such as heart disease, high blood pressure, and Type 2 diabetes, which strike many people as they age.

To be sure, if you have a chronic condition, or you're over age 60, you should consult with your doctor before starting a new activity such as dancing. If you've been inactive but are healthy, a doctor could advise you how to slowly increase activity and build up strength. You can also discuss with your doctor what symptoms may be warning signs that you're overdoing it. Certainly any new exercise-related symptoms, such as fever, chest pain, or a swelling in your joints, should tell you to put the brakes on and see your doctor.

And remember, you can start out gradually, perhaps doing some walking and moderate weightlifting to get in shape for going out. At 104, my great-aunt Lenore Schaeffer kept up her strength by working out regularly at a local gym, which had granted her a "lifetime" membership. Though she cut down on her workouts in her last years, she still got to the gym once or twice a week. She was also the December "poster girl" for an Aging with Grace calendar, posing in silver lame with a parasol.

So if you're healthy and aging, and you want to dance, what's keeping you off the dance floor? For those of you who worry about shaking a leg at an advanced age, Schaeffer said in her no-nonsense way, "Just do it if you feel like it. It's a wonderful pastime, you'll make friends, and, hopefully, you'll live a lot longer because of it."