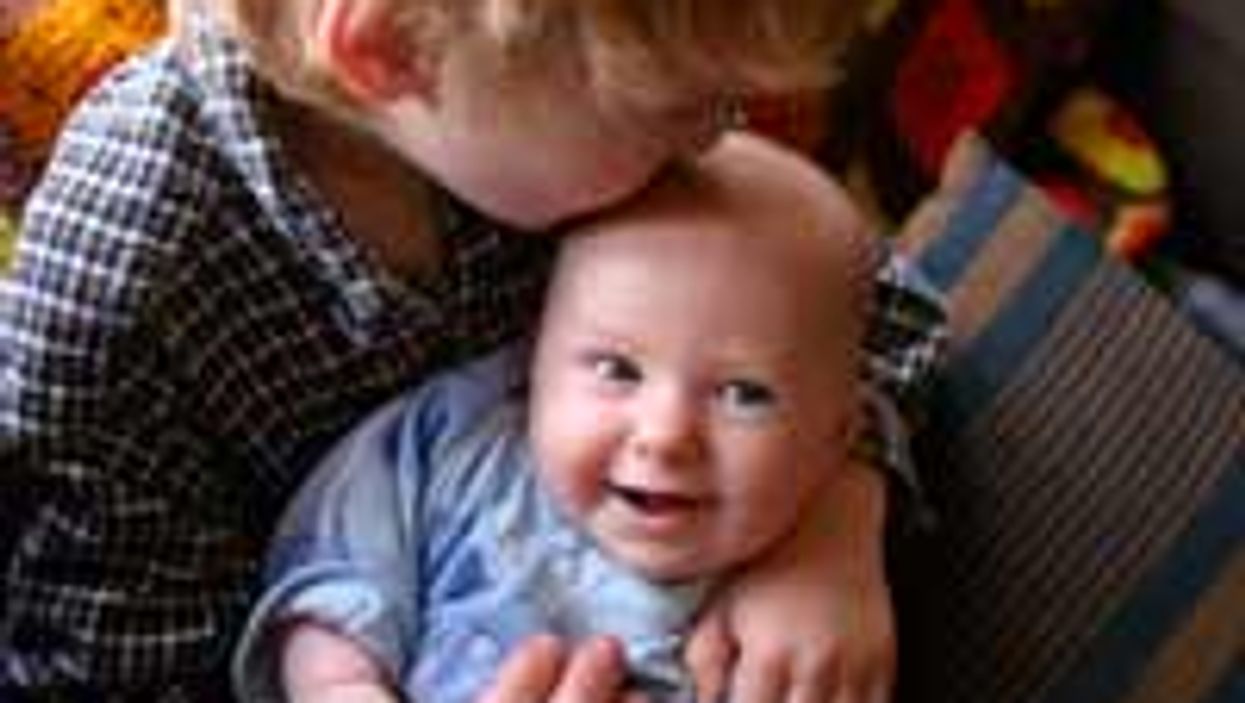 One of the great joys of growing older is the arrival of grandchildren and the mutual adoration that so often springs up between the youngest and oldest members of a family. Grandparents who aren't the primary caregivers often see in their grandchildren a chance to express boundless, unconditional love without the restraints and responsibilities of parenthood. But if your grandchildren live hundreds or even thousands of miles away, you may find your love mixed with large measures of sadness, resentment and anxiety.

When her grandchildren were small, Mildred Adleman still lived in the house in Philadelphia where she raised her son and daughter. While her children were growing up, her own mother lived a few miles away and visited several times a week.

"Every Sunday was like a party," she said. "My mother's greatest pleasure was to drive over here and take my children shopping." Adleman and her kids loved having a doting grandmother close at hand, and she looked forward to assuming a similar role. But like many children, hers grew up and moved far away. Before she became too ill to travel, Adleman flew to Berkeley, California, to see her daughter and her granddaughter. She made a second annual trip to Chicago, where her son and her two grandsons live.

The once-a-year reunions, as it turned out, were simply not enough. "I think it's terrible," she said. "I never thought I wouldn't get to see my grandchildren grow up. Each time I get off the plane in Chicago, it's like I'm a stranger. I get the stilted, obligatory kiss. They don't know what to say to me. I ask them questions and they give me one-syllable answers. I want to shop for them, and I don't even know their sizes."

Perhaps these feelings were most poignant when she saw the boys with their mother's parents, who live nearby. The taste of what might have been is particularly bitter then.

"I am jealous of the grandparents who live there," she said, remembering how her grandchildren rush to hug their other grandparents and tell them about their adventures. "I'm always the guest grandmother. They aren't used to me. It's just not the same as when you see them every week."

Like many grandparents, Adleman longed to know what's going on in her grandchildren's lives, good or bad. That desire intensified when one of them was sick and she couldn't be near.

"When my granddaughter was born, it was touch and go, and I was beside myself," she said. "I really wanted to be at my daughter's side. You wait for the call and you wish you could be there and be of some help."

Losing a sense of community

Of course, not all grandparents feel this way. Many see their retirement years as a respite from decades of meeting their children's needs. "Some grandparents choose to move away to the Sunbelt," said Dr. Lillian Carson, a psychologist in Santa Barbara, California and the author of The Essential Grandparent: A Guide to Making a Difference. "There are grandparents who feel like, 'I've been there, done that. I want to play golf and be in the warm climate.' When they make these permanent moves away from their families it almost seems as if they're choosing to miss out on their grandchildren's lives."

But, she added, grandparents like Adleman, who lack an outlet for the love that fills their hearts, understand that they have something unique to offer their grandchildren.

"Grandparents are needed more than ever now that we've become a more fragmented and mobile society," Carson said. "We're losing a sense of community. Grandparents offer support and stability. Parents are infected by anxiety and overwhelmed by the do's and don't's of parenting. Grandparents are outside that daily grind, and they bring a different perspective."

Carson, whose own 10 grandchildren are scattered across the country, says that, short of moving, there are some important steps distant grandparents can take to enhance these relationships. "Long-distance grandparenting takes creativity and continuity," she says. "You've got to find ways to let them know that you are thinking about them." Phone, fax, mail, e-mail, Facebook -- it doesn't matter as long as it's regular communication. And now that Skype lets you talk free while looking at your loved ones on a video screen, you can see your grandchildren in prime time.

When Carson couldn't travel to Northern California for her granddaughter's first piano recital, she splurged and sent flowers. Her granddaughter was so impressed by getting a delivery from a florist that she took the flowers with her to dinner after the recital. "They put the flowers I sent on the table, so even though I couldn't be there, Grandma Lily had a presence there."

One of her Santa Barbara friends has a regular Saturday telephone-reading date with grandchildren who live in Oregon. This grandmother buys two copies of each storybook and sends one to the children so they can follow along.

If your grandchildren have never seen where you live, take photos of your home, your friends, your street, your pets, so that they can begin to get a sense of your life. "Tell them what you do," Carson says. "Tell them your stories, and you become real to them."

That could include making a photo album for your grandchildren. For young children, some grandparents have turned their albums into lessons on the ABCs: A photo of family members picking apples can be placed, for example on the "A" page for "apples." And since many families are so frequently on the move they are hard to reach, grandparents could agree with their children on a special time every weekend when their grandkids will be home anticipating a phone or Skype call. There are also more opportunities than ever for vacation trips specially designed for grandparents and their grandchildren.

And Carson, who believes all children benefit from the strong presence of elders, encourages distant grandparents to get to know local youngsters who are the same age as their grandchildren. "It helps you connect to see what children their ages are like."

Carson herself volunteers as a classroom reader at a local elementary school. "I love going into the classroom," she says. "There's much to be gained from finding some children to be with. Take a walk. Bake some cookies. As elders, we need to embrace all children."

The COVID-19 pandemic was especially hard on grandparents, many of whom were unable to see their grandchildren for more than a year. Now that grandparents can be vaccinated against the disease, many have had joyous reunions.

In March of 2021, psychologist Mary Karapetian Alvord of Maryland saw her granddaughter for the first time since December of 2019. "There were pangs of sadness that we had not been able to see each other through all this time, that I haven't been able to watch her grow in person," Alvord told the Washington Post, "but the overriding emotion was just the joy of being able to relish this week with her. And then the sadness of having to leave again. They're so far away. But we're already looking forward to the next trip."

Familyhostel
Learning vacations overseas for grandparents, or parents over 50, and their children.
800/733-9753

The Long Distance Grandmother: How to Stay Close to Distant Grandchildren, by Selma Wassermann (Hartley & Marks).