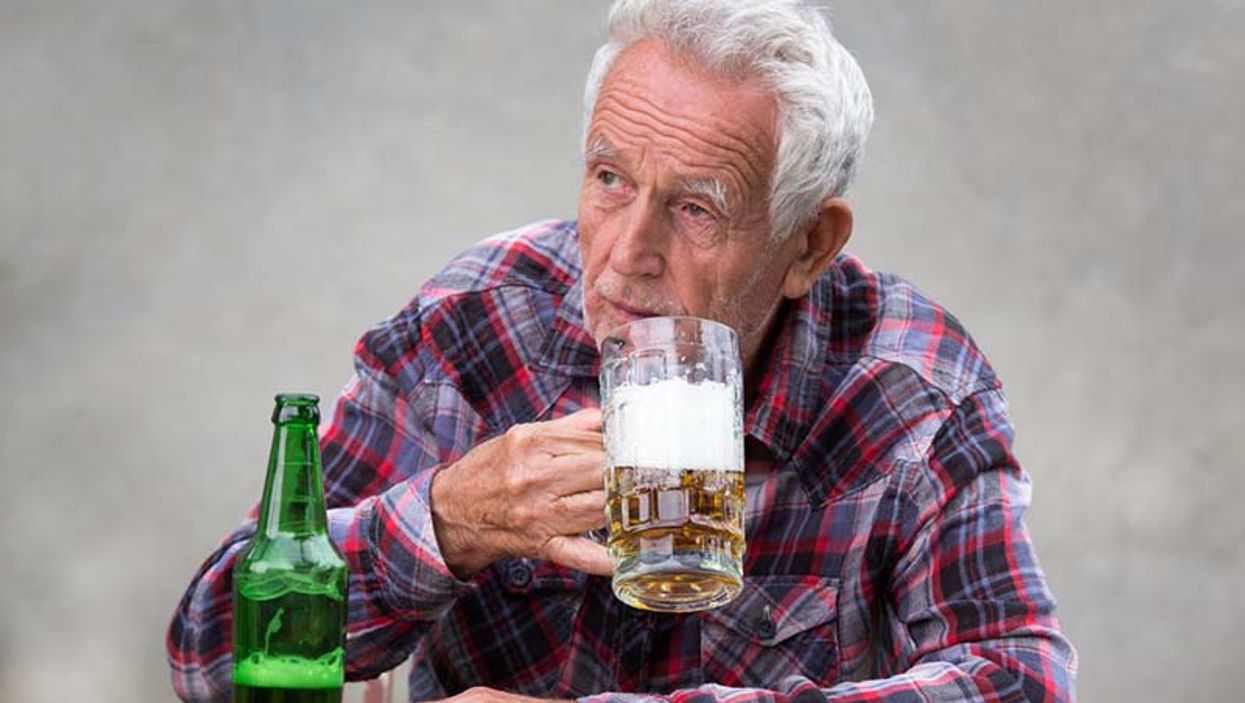 If you're over 60, you may use alcohol in much the way you did when you were younger. You may have a glass of wine at a meal, a beer or two at a ball game, or a gin and tonic at a party with friends. And if your doctor says it's fine for you to drink, there's probably nothing wrong with it.

But if you've found yourself feeling tense and irritable when you're not drinking, you may have a problem. According to the National Institute on Alcohol Abuse and Alcoholism (NIAAA), an estimated 80,000 of this country's nearly 8 million alcoholics are seniors. It's a problem that's often hidden. Problem drinking often goes undiagnosed for the simple reason that people tend to live less public lives as they grow older. Furthermore, doctors may not link symptoms that are also common signs of aging -- falls, loss of appetite, failing memory, sleep problems, or depression -- to alcohol abuse.

How can I recognize the signs of alcohol abuse?

Not everyone who drinks has an alcohol problem. The NIAAA offers some guidelines to help determine whether you or someone you care about may be abusing alcohol. You might want to get help if you notice any of the following:

Another set of questions commonly used to determine if a senior has an alcohol problem is the "CAGE" test, developed by Dr. John Ewing:

Answering "yes" to two or more of these questions may indicate a drinking problem.

Why would I drink too much?

It's all individual. You might begin drinking more after retirement because the sudden overabundance of free time can leave you with the feeling that you've lost purpose in life. The resulting boredom and sense of uncertainty could invite you to drink more than you usually do. Or you might have suffered from loneliness after your children moved away, or after the death of your spouse or friends. It's natural to feel lonely under those circumstances, which push some people to turn to alcohol for comfort. You might also be suffering from stress or depression. The very real difficulties of aging -- failing health, limited mobility, financial hardships, or caring for an ailing spouse -- can easily pile up and impel seniors to drink. Or -- and this is true in two-thirds of the cases of alcohol abuse in later life -- you might have had a drinking problem that has gotten worse over the years.

Does sensitivity to alcohol increase with age?

Yes. Animal and human studies show that sensitivity to alcohol increases with age. Based on that information, the NIAAA recommends that people over 65 have no more than one drink per day.

The reason? You have a decreased tolerance for alcohol. As we age, our bodies don't metabolize and excrete alcohol as efficiently; this results in higher blood alcohol levels per drink and swifter, longer-lasting intoxication. Even if you were a moderate drinker in your youth, you may find that the same amount of alcohol you used to drink will lead to trouble when you're older.

Why is alcohol abuse especially harmful to people over 60?

According to the NIAAA, alcohol increases the risks for falls and accidents, which can be very serious for people in this age group. It also slows down brain activity, affecting alertness, judgment, coordination, and reaction time.

In addition, drinking worsens many medical conditions common in older people, including high blood pressure and ulcers. What's more, the effects of alcohol can make some medical conditions hard to diagnose. For example, alcohol causes changes in the heart and blood vessels and can dull pain that might be a warning sign of a heart attack. Alcohol abuse can also mimic Alzheimer's disease, with its symptoms of confusion and memory loss. Over time, heavy drinking permanently damages the brain and central nervous system as well as the liver, heart, kidneys, and stomach.

Finally, your age group is the heaviest users of prescription medicines and over-the-counter drugs of all population sectors, and mixing these substances with alcohol can either exaggerate or reduce the effects of many medications. In turn, drugs can intensify the impact of alcohol. (A good number of medications, in fact, already contain alcohol.)

Be aware that mixing alcohol with drugs such as tranquilizers and sleeping pills, as well as some antidepressants, anti-anxiety drugs, antihistamines, and painkillers, is extremely dangerous and potentially fatal. If you drink, consult with a doctor or pharmacist about potential interaction problems with the drugs you're taking. And always make sure to check prescription drugs for instructions and warnings about alcohol.

How widespread is problem drinking among seniors?

While alcohol use generally declines with age, by 2040 more than 20 percent of the U.S. population will be over 65 and some experts speculate this may put more of a burden on health care services for seniors who are at risk of alcohol abuse. In fact, one survey shows that nearly as many seniors are admitted to acute care hospitals for alcohol-related conditions as admissions for heart attacks. In another large survey, published in 2007, researchers gathered data from almost a dozen hospitals and found that 24 percent of people over 65 binge drank and almost 8 percent exceeded the NIAAA guideline for seniors of drinking no more than seven alcoholic beverages in a week.

Who is most likely to become a problem drinker?

Women, take note: While alcoholism in general is five times as likely to affect men than women, the U.S. Department of Health and Human Services reports that women are more likely to become alcoholics late in life. In addition, women do not metabolize alcohol as efficiently as men do, so they are more likely to become dangerously intoxicated. Late-stage complications of alcoholism in women -- liver damage, hypertension, anemia, and malnutrition -- develop faster and with lower levels of alcohol intake than in men.

Of elderly problem drinkers, two-thirds are "chronic" abusers, or people who have been heavy drinkers for many years. The rest are termed "situational" drinkers, having turned to alcohol later in life in response to significant and often traumatic life changes, such as bereavement, illness, disability, and retirement. Among situational drinkers, women outnumber men.

Where can I go for help?

Here's the good news: According to the National Institute on Aging, seniors who seek help for a drinking problem have a good chance for recovery because they are likely to stick with treatment programs, especially when the programs are geared specifically to seniors' needs.

If you are family members or friends of an elder with a drinking problem, you can also help by realistically assessing the difficulties he or she faces and being alert to changes in behavior. You can assist a senior with a drinking problem by helping him acknowledge and mourn any losses that may have spurred the problem drinking, by helping him find treatment and a support group, and by suggesting alternative activities. If he or she is in danger from alcoholism, you may want to do an intervention -- that is, confront the person (perhaps with a counselor present) about the difficulties caused by the alcohol abuse and suggest the person immediately enter an inpatient or outpatient detoxification and rehabilitation program.