Twentysomethings admire it. Men ask if they can touch it. All that from a tiny blue wing on her ankle? 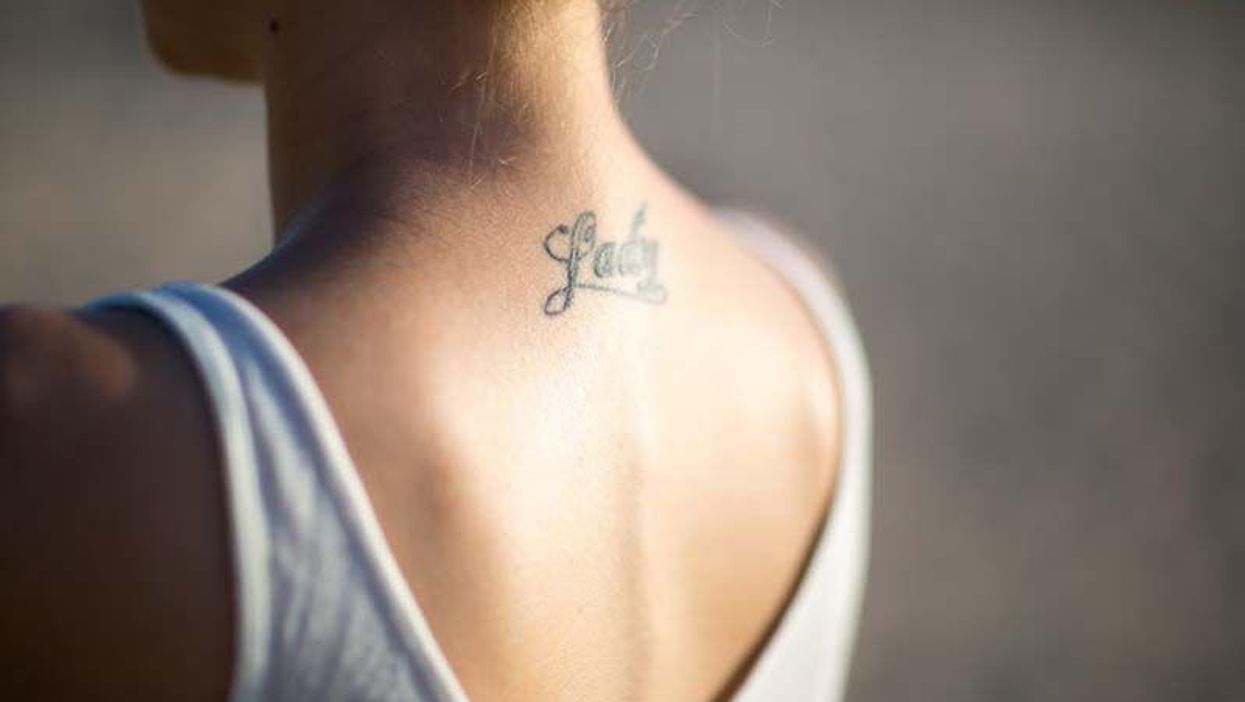 Getting a tattoo first occurred to me as I approached my 40th birthday. Even now, years later, I can't say exactly why. I do know what a shrink would say (shrinks tend to be predictable on such matters): "Trying to stave off aging, to regain lost youth" - all that oh-so-obvious stuff, which is boring because it's just plain wrong. A tattoo is far more complex than that.

There's a touch of the forbidden in it, of course, of the daring, the transgressive. It's a mark of the wild woman, and 40 seemed to me an excellent time to go wild, to loosen the hold of convention and break free of expectations.

That was easier said than done. I couldn't decide what kind of tattoo I wanted, let alone where on my body. "Remember," my friends kept saying, "you'll have to live with this for the rest of your life." At 40, this still seemed a daunting idea. I settled for having my ears pierced instead.

As I neared 50, however, the thought returned. By then, tattooing had emerged from the underworld of sailors' bars and jailhouse cells. Transgression was in. Teenagers etched barbed-wire bracelets around their arms and their calves (you didn't need to be a shrink to know they'd regret it in a few years' time). Women my age were quietly opting for small, discreet tattoos -- a rose or a piece of trailing ivy in a secret place, to be discovered by a lover and nobody else.

I didn't want that. I wanted something visible, but not too visible; something not hidden, but hideable. I liked the idea of a tattoo's being simultaneously private and public, but where on my body would that be?

The answer came a few months later, when I'd given up searching for it. I was sitting on the deck of my houseboat in Seattle, one leg draped lazily over the other, lost in thought of nothing in particular. My gaze focused on the inside of my right ankle, on the swell of bone and the hollow beneath it.

"No wonder the Victorians considered ankles so sexy," I thought. There, suddenly, was my answer. And once I knew the place, the tattoo itself sprang to mind ready formed: a wing. "Like Mercury, for the mercurial side of me," I joked to others, but really, it was to celebrate my ability to fly.

For fly I did. In my late 40's, I'd taken off a couple of months from my full-time writing and applied myself to earning my private pilot's license. I don't know why I did this. Because someone suggested it, yes. Because it felt right, certainly. But the idea of flying had never occurred to me before. I'd never had a single dream of flying until I actually began to do it.

Yet there was now doubt, once the idea was there, that flying was the right thing to do. I could take the money I had saved and get a full face-lift with it, or I could just fly it all away. I could enter my 50's with plastic surgery or with wings, lift my skin or lift body and soul.

As with flying, so too the tattoo: I had no doubts. If at 40 I'd been hesitant, at 50 I had become my own woman. Living with a wing for the rest of my life was exactly what I wanted to do.

Alas, there were no wings (beyond Harley-Davidson's) in the pattern books of the tattoo parlors. I spent many hours searching through art books, then finally found my wing in the perfect place: a book of mythical beasts. It was a griffin's wing. I copied it and with the aid of a graphic artist friend, gave it an art deco touch.

Then I interviewed a half dozen of Seattle's best tattoers, very particular not only as to cleanliness but also as to who would have the privilege of marking me for all eternity. The young woman I chose was sweetly shy.

"Be gentle with me," I joked, and the moment the buzzing needle touched my ankle, I knew she would be. The bloodless stings were uncomfortable, but not unbearably so. The two painkillers I had taken before leaving home were doing their job just fine. I leaned over and watched every stroke, terrified that her hand would slip, grateful and amazed that it didn't.

My wing is now two years old. In winter, it goes into hibernation under suede boots. In summer, it emerges, reborn. It winks at passersby as I walk along the pavement, suddenly reveals itself as I sit down and cross my legs, flashes its signal of freedom and individuality to those behind me as I walk up a staircase.

Some people stare at it and look uncomfortable. I know I don't want to talk much with them. Certain men ask very quietly, almost shyly, "Can I touch it?" Twentysomethings admire it and revise their opinion of fiftysomething women. Only children ask why a wing; when I tell them, they look at me in awe.

I don't fly anymore. The kind of flying I was doing, aerobatics, required going up in the air at least twice a week to stay sharp, and once I'd flown away the bundle of cash I had earmarked, either I had the time but not the money or the money but not the time. So I stopped. And yes, I do miss it.

I miss the heady sensation of being above the clouds, with only the peaks of the mountains for company under the arching blue sky. I miss the loops and rolls and spins, the sensation of riding the wind, that moment of almost postcoital tristesse as I'd touch down again, the wheels squeaking onto the tarmac.

Still, all that is now part of me -- part of my experience, part of who I am. It's inscribed in my mind and inscribed, too, on my flesh. I may be grounded, but one glance at my ankle, and I remember with a smile: I can fly.