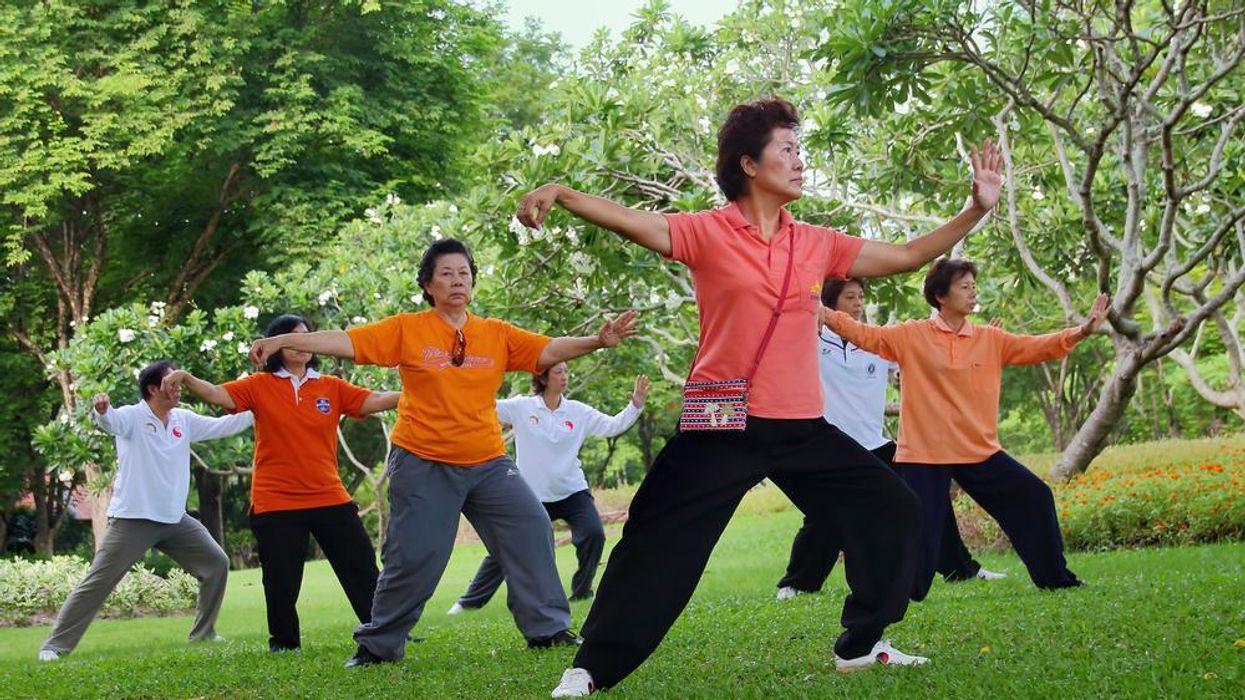 Nine people walk in a circle, obeying the commands of instructor Nancy Kieffer. "Imagine a cup of water on the crown of your head," she calls out. The directive may seem like something out of a 1950s charm school guide for perfect posture, but for this particular warm-up exercise, balance is the key element. The class is Tai Chi, and the students are practicing the ancient Chinese martial art to get relief from arthritis.

"All right, let's do the catwalk," Kieffer instructs, opening and closing her hands like a feline's paws while gingerly placing one foot in front of the other. After the warm-up, she leads the group through a series of slow, fluid movements called "Brush knee," "Wave hands like a cloud," and "Play the lute."

Experts agree that in most cases, gently exercising and stretching is the best way to reduce arthritis pain and maintain strength. The art of Tai Chi has been used to enhance health for hundreds of years in the East. Now it's gaining popularity as a way to fight off the crippling pain of arthritis, and increase flexibility and strength without straining joints.

Watching 62-year-old Barbara Diskowski perform the dance-like movements, it's hard to believe that outside of class she uses a cane or walker. Stiffness, severe arthritic pain, and a fear of falling have made her rely on the walking aids for the last year. Before Tai Chi, she used to look out wistfully at her garden, wishing she could get down in the dirt and tend plants. "Trimming the roses was impossible because I have osteoarthritis in my knees and hip," she explains. "I felt like I couldn't do anything."

But the Tai Chi class, which she has taken for a month, has already helped her do things that used to be too difficult, including pruning her flowers. "I feel more limber. Overall, I feel better and I have more energy," she says.

Tai Chi can certainly be enjoyable. For some, it simply provides relief. For others, regular practice has helped them break out of a cycle of chronic pain and diminished abilities.

Before taking Tai Chi, Homing Cheung, 61, says he couldn't move his arthritic left shoulder at all. "Now I can do this," he says, beaming, as he shoots his arm all the way up in the air.

Several small studies show that Tai Chi helps people do the motions necessary to carry out daily activities. In one study, 33 people with arthritis in one or more affected joints in the hips or legs practiced Tai Chi two hours a week for three months. At the end of that period, they reported "improved walk speed, bending ability, arm function, self-care activities and household tasks," according to the study, published in the Journal of the American Geriatric Society.

A systematic review of studies on Tai Chi and osteoarthritis found that "there is some encouraging evidence suggesting that Tai Chi may be effective for pain control in patients with knee OA." However, the study authors said more controlled studies were needed to see whether there was convincing evidence of pain reduction or improvement of physical functioning.

And according to the Cochrane Collaboration, which reviews treatments for evidence of safety and effectiveness, there is also "'silver' level evidence that Tai Chi improves the range of motion of the ankle, hip and knee in people with rheumatoid arthritis. It did not improve people's ability to do chores, joint tenderness, grip strength or their number of swollen joints nor did it increase their symptoms of rheumatoid arthritis. But, people felt that they improved when doing Tai Chi and enjoyed it."

Although there have been no large, long-term studies on how much the ancient discipline helps those with aching joints, the testimony of arthritis sufferers who have done Tai Chi was enough to convince the Arthritis Foundation to begin offering it across the country.

The program consists of 12 basic movements chosen from the Sun style of Tai Chi and was designed especially for people with arthritis. It was adapted from a similar program created by Nancy Kieffer's trainer, Dr. Paul Lam, an Australian physician and Tai Chi master.

A study of the Tai Chi exercises used in the foundation's classes revealed that 22 participants with arthritis experienced "significantly less pain and stiffness in the joints" than 22 non-practicing arthritis sufferers. For 12 weeks, the Tai Chi group spent 20 minutes a day, four times a week executing the movements, according to the study, which was presented at an annual meeting of the American College of Rheumatology.

What makes the specially designed Tai Chi class easier for arthritis sufferers, explains Kieffer, is that the movements are low-impact and don't include a lot of the bending and low postures typical of other Tai Chi forms.

Beyond the set movements, Kieffer makes sure that students find their own comfort zones and stay there. That means not "stretching into pain." There's also the two-hour rule: if you're still hurting a couple of hours after the class is over, you need to modify your workout. If that doesn't work, Kieffer advises students to consult their doctor.

For Cristal Delgado, Tai Chi has been a real pain reliever. The 42-year-old hairstylist suffered such extreme pain in her neck and arms from arthritis and pinched nerves that she could barely move at all, never went out, and wished her arms would just disappear.

For the last three months she has practiced Tai Chi daily, and is surprised at how much it's helped. "One thing I learned from this class is that if you move and stretch, you're in less pain," she says. "Basically I'm doing what every normal person does now and it feels good. And just to feel good about yourself, it makes everything else okay."

Observation of Nancy Kieffer's Tai Chi class and interviews with Kieffer and her students.

Unpublished paper from the National Arthritis Foundation, presented in a workshop at the American College of Rheumatology Scientific Meeting.