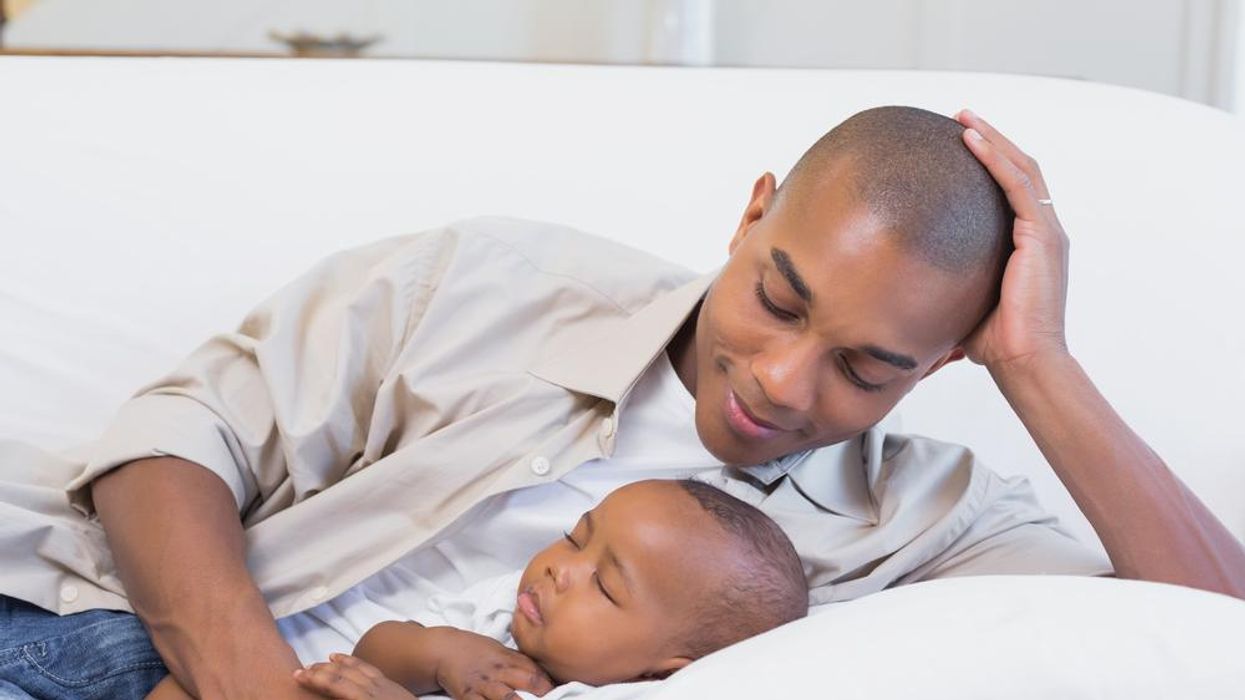 Almost all new dads discover amazing talents in the first few days of fatherhood. But even the toughest guys can be afraid of babies -- especially their own. As soon as a first-time father carries his newborn through the front door, his life opens up to brand-new worries, doubts, and insecurities. Even before he unwraps that first diaper, his life has changed forever.

Larry McGrail, a registered nurse in Billings, Montana, has seen every shade of fatherly fear, from mild concern to sheer panic. McGrail teaches a monthly class called Boot Camp for Dads, part of a nationwide program that prepares rookie fathers for the challenges ahead. One recent participant -- a large biker with tattoos and a leather jacket -- summed up the feelings of many dads when he said, "I just don't know if I can do this."

These doubts often reach their peak when a baby first comes home, McGrail says. The phone is ringing, the new mother is exhausted (possibly even crying), and a small person is wailing and doing unmentionable things in his diaper. But this isn't the time to panic. It's Dad Time. New fathers realize that they can hold the baby without breaking him, that they can comfort him when he cries, and that they can stomach more than they imagined. In short, they realize they really can "do this."

The biker certainly overcame his fears. In the Boot Camp, veteran fathers taught him everything from how to hold a baby to dealing with a new mom. A few months after the birth of his child, he came back to Boot Camp beaming with pride. "Having a baby is the best thing I've ever done," he said. "I wouldn't even trade my baby for a Harley."

If you're about to become a new father, don't let worries overwhelm you. Take some time to prepare yourself for the first few days with your new baby, and don't expect things to be perfect from the beginning. Once you get those initial uncertain moments behind you, you'll be ready for the long haul. Here are some of the issues every dad faces in the first days:

How do you know when your baby is hungry? When he or she tells you! Babies aren't stoic enough to go hungry in silence. Listen for that alarm bell to go off every three to four hours or so. Some babies need to eat every one to two hours.

If your partner is breastfeeding -- the form of feeding that's best for the baby -- there is a lot you can do to support her. She'll want the baby the moment he starts fussing. The mere sound of your baby's cries will get her milk flowing. If you don't hurry, her breasts will start leaking (don't panic, though). Try not to feel "left out" when she feeds the baby. There's much more to bonding than feeding. You'll have countless hours ahead of you for tickling and holding and reading and roughhousing and everything else that a kid needs from a parent. Besides, you don't have to just sit around during mealtime. Take a moment to bring your sweetheart a glass of water and plant a smooch on your baby's head.

Breast milk is best for babies, but they can grow up strong and healthy on formula, too. If you're giving your baby formula, take turns feeding him so you can both enjoy the experience. Your pediatrician or family doctor can help you choose a formula that's right for your baby.

OK, maybe you gag whenever you're within 30 feet of a dirty diaper. Maybe the thought of body fluids in general makes you queasy. Even you will be amazed at how easy it is to get used to diaper duty. "A lot of dads say there's no way they'll be able to change a diaper," McGrail says. "They soon find out they can handle anything when it's their own kid."

Keep in mind that until a baby starts eating solid food, her poop won't look or smell anything like the adult version. The first diaper deposits will be sticky and very dark in color. After a day or so, there will be frequent deliveries resembling puddles of pumpkin soup or dijon mustard, complete with a yeasty aroma. It's not pretty, but it's not exactly toxic waste, either. Just keep plenty of wipes and spare clothes (for you and the baby) handy. Expect your baby to go through several adorable outfits a day. That's likely to mean extra laundry duty for you.

One other note of caution: Get in the habit of using the safety straps every time you put your baby on the changing table. Better yet, consider changing him or her on a blanket on the floor. While it will be months before your little one can roll over on purpose, babies only a few days old have been known to flip and fall.

Don't expect your baby to slip into a regular sleep schedule right away. She'll sleep when she's tired, and he'll wake up when he's hungry -- usually every three to four hours.

Of course, this schedule can wreak havoc with your own sleep. Those nighttime wake-up calls can be especially disruptive if your baby sleeps in her own room and you or your wife have to trek across the house several times a night. Many parents -- dads, in particular -- find they get more sleep if the baby sleeps in their bedroom.

Some parents keep their baby in bed with them, a practice called co-sleeping. Co-sleeping is both convenient and satisfying, but be warned: A small number of infants have died while sleeping in their parents' bed, often because they suffocate on the soft bedding, get trapped between the mattress and the wall or bed frame, or someone rolls over them.

The Consumer Product Safety Commission has come out strongly against co-sleeping, as has the American Academy of Pediatrics (AAP). The AAP recommends instead that parents place their baby in a crib or bassinet in the same room with them to sleep, and take them into bed only for nursing or comforting. The AAP also recommends these guidelines:

Don't let your baby sleep on his stomach (a good rule no matter where he sleeps), don't set him down on a soft mattress or soft bedding (another good general rule), make sure the mattress fits snugly in the frame or against the wall, don't smoke (smoking in bed increases the risk of sudden infant death syndrome, not to mention fires), and don't go to bed drunk or under the influence of drugs. If your mind is clear, you're less likely to roll over on your baby.

Newborns don't enjoy crying, and they don't make an effort to irritate their parents. They cry to communicate, and the message shouldn't be ignored. If your baby's stomach is full and his diaper is dry and he still isn't happy, pick him up and walk around the room. If it's a nice day, take him outside and show him a tree. As you hold him, sing or talk softly while you pat his back or stroke his head. Chances are, he'll calm down. Some parents find that newborns are calmed by massage or gentle rocking. Remember: It's impossible to hold a new baby too often. As a report from Yale-New Haven Children's Hospital put it, "you can't spoil a newborn."

Delivering a baby is incredibly hard work, and new moms are bound to feel wiped out and a bit intimidated, too. Be sure to help out around the house, but don't overdo it. This isn't the time to dust behind the refrigerator. Just do what it takes to keep your house livable and your spouse comfortable. If she's depressed, irritable, or uncharacteristically anxious, be understanding. Many women experience post-partum depression. She's likely to go through a hormonal storm that will soon pass. If it doesn't, she may have severe post-partum depression and should see her doctor. No matter how she's feeling, you have two major jobs: Telling her how much you love her, and showing her how much you love the baby.

New moms and dads often play Spot the Symptom. "Does his head feel hot to you?" is the mantra of new parents everywhere. McGrail offers this advice to dads: Don't panic. As a rule, babies who come home healthy stay healthy. But if you ever have any questions or concerns, don't hesitate to pick up the phone and call your baby's doctor. According to the Johns Hopkins Family Health Book, you should call the doctor immediately if your infant has a fever over 100 degrees, if he's crying constantly for no apparent reason, or any time you think something might be seriously wrong.

The arrival of a new baby can be nerve-wracking -- but it's often less nerve-wracking than the arrival of swarms of well-wishers. McGrail urges new dads to not let relatives and other visitors take over the house. (On the other hand, there is nothing wrong with accepting some help if you need it. Just don't let others -- even relatives -- push you around too much: it's your house and your baby).

Some new parents warn people in advance that they'll need a few days alone with the baby. If you do allow visitors, keep the visits short and sweet. All three of you need to relax, not entertain. Try to keep the house calm and quiet, at least as quiet as a house with newborn can be. And cheerfully accept all offers of home-cooked meals brought to your door. Chances are, until you find your rhythm, you'll both be too wiped out to cook.

Your baby will eventually "bond" with you even if you aren't constantly on hand in the beginning. But as McGrail puts it, "You'll never get those first hours or days again." If at all possible, give your baby plenty of quality dad time. Take a paternity leave, or, if you don't have that, claim some vacation days or floating holidays: whatever it takes. Just be with your baby as much as you can. Watch his chest move up and down while he sleeps. Hold him when he's awake. Practice your hook shot with his wadded-up diapers. Just be there. You'll never regret it.