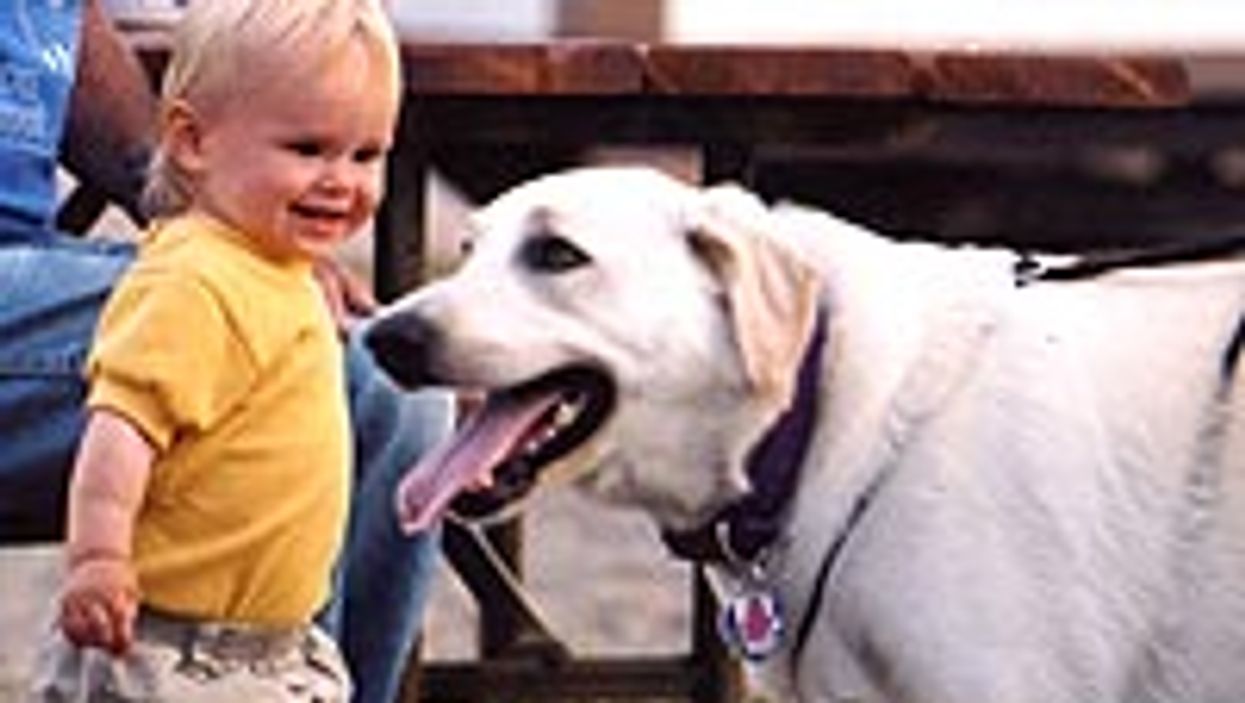 Little kids love dogs. Even babies want to crawl on the furry member of the family. Unfortunately, the warm feelings aren't always mutual. According to the Centers for Disease Control and Prevention (CDC), about 400,000 kids in the United States get medical care for dog bites each year. (And lots of other nips and bites undoubtedly go unreported.) Many dogs bite out of fear, aggression, jealousy, a sense of territory, or even playfulness. Unfortunately, if a dog feels like biting, any child can be a target -- including newborns.

If you have a baby in the house, think carefully before adding a dog to the family. And if you already have a dog, take a few extra steps to prepare for the arrival of a new baby. Babies and dogs can live together well, but they need supervision and guidance.

Which dogs are most likely to bite?

Any dog is capable of biting, although a particular dog's behavior has a lot to do with his training and how he was raised -- not just his breed. Still, several breeds of dogs seem to be unusually likely to bite people. Experts advise not letting your baby or child near a pit bull. Pit bulls alone accounted for about one-third of all fatal dog attacks between 1981 and 1992 in the US (Some of the fatal attacks were from pit bulls trained to fight, but children have also been killed by their family pit bulls -- dogs whose owners and neighbors described as sweet and loving.) Other aggressive breeds include German shepherds, malamutes, chows, Rottweilers, huskies, and wolf hybrids.

Some breeds have a more gentle reputation. These dogs may not be completely trustworthy, but they're less likely to attack a child. Good "family" breeds include boxers, labs, retrievers, English setters, English springer spaniels, and dalmatians.

Whether he's a lab or a Chihuahua, you need to pay close attention to the animal himself. If he acts aggressive, or if he has bitten people in the past, you don't want him near your baby. You should also avoid bringing home a dog that's more than four months old. You won't know much about his history or personality, and you won't have as many chances to shape his behavior. Even if a dog has been gentle since puppyhood, you should watch for signs of illness or changes in attitude. If your dog suddenly develops any aggressive behaviors, ask your veterinarian for advice.

Good training can help keep most dogs from turning into a biter. A dog that knows the basic commands of "sit," "stay," "come," and "no" will be much easier to control. In addition, you should teach him submissive behaviors like rolling over on his back. He should also learn to not growl when someone takes his food.

If your dog likes to nibble, swat, or pounce on people, redirect him with a ball, stuffed animal, or other dog toy. Don't wrestle with him or play tug-of-war -- these games only encourage him to be more aggressive. And don't let him get up on the furniture or beg from the table. He needs to know his place in the family. If he thinks he's just "one of the kids," he's more likely to bite.

How can I prepare my dog for the arrival of a new baby?

A healthy dog is a happy dog, and a happy dog is less likely to bite. Regular veterinary care can help keep your dog gentle and well-behaved. In particular, make sure all of his vaccinations are up-to-date before he comes in contact with your children. And if you haven't done so already, have the dog spayed or neutered. This almost always makes a dog less aggressive.

You might have to employ a little dog psychology, too. Someone in the family should make an extra effort to give the dog plenty of attention both before and after a new baby arrives. If the dog is particularly attached to the mother-to-be, someone else may have to take over the job. If you have friends or relatives with babies, encourage them to come over for a visit. Of course, you'll want to keep a very close eye on your dog whenever there's a baby around.

What else can I do to protect my baby from dog bites?

No matter how gentle your dog may seem, he shouldn't be left alone with a baby or a young child. You have to be wary of dogs outside of the house, too. If you're pushing a stroller down the sidewalk, pick up your baby if a strange dog approaches. As your baby gets older, teach her to stay away from strange dogs. In turn, you can do a lot to protect others by keeping your dog on a leash.

What should I do if my child is bitten by a dog?

First of all, make sure your child isn't in any more immediate danger. Get him away from the dog and make sure the animal is under control. Then call the doctor. Your doctor will need to assess the situation to determine the rabies risk and whether your child needs stitches, antibiotics, or a tetanus shot.

Preventive action could help. According to the CDC, babies should get three doses of their DTaP vaccinations (which includes a tetanus shot) in their first year, usually at two, four, and six months. Your child should get a booster shot at age 15 to 18 months, and a final DTaP at age four to six years.

Rabies is very rare in the United States, but you don't want to take any chances. Get medical help right away if your baby is bitten by a dog who may not have current vaccinations. If the dog has been immunized recently, his owner should watch him carefully over the next 10 days for any sign of illness. If the dog hasn't been immunized, he should be put in quarantine for 10 days at a vet's office. If the dog can't be put in quarantine or can't be found, your child may need rabies shots.

As long as kids and dogs live together, some kids are going to get bitten. But your child doesn't have to be one of the victims. If you choose your dog carefully, train him well, and watch him closely, he and your child can have a safe and loving friendship.