One toddler is a job; 20 are a handful. Here's what it takes to stay healthy and young in spirit. 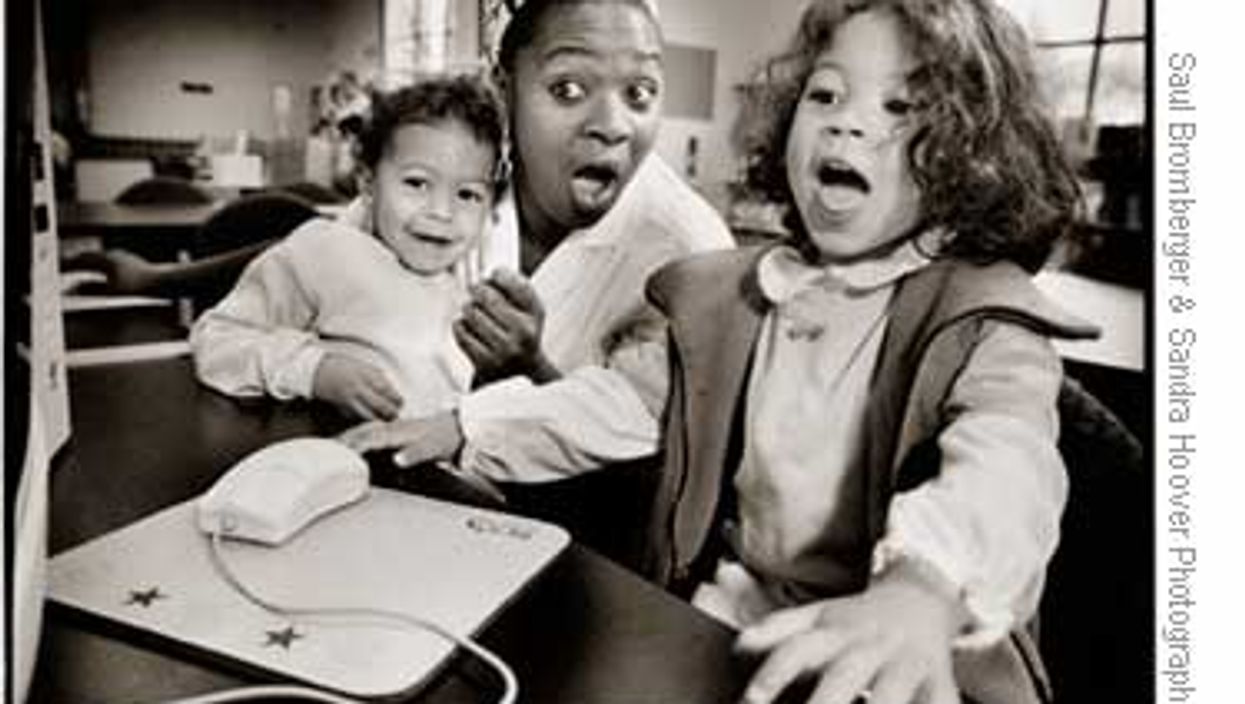 Theresa Quillen, a day-care worker for the last 20 years in Philadelphia, deeply loves children -- even the one who sent her to the hospital.

The 3-year-old boy didn't mean to hurt her. He just happened to be standing around when another 3-year-old was looking for someone to punch. Quillen rushed to pull the boy out of harm's way. "As soon as I picked him up, I felt a sharp pain in my back," she says. "Within a few days, I couldn't even get out of bed."

Daycare centers may not seem like dangerous places. After all, the only noxious fumes come from the diaper pail, and the walls are covered with pictures of Big Bird and Winnie the Pooh, not biohazard stickers or high voltage signs.

But as Quillen or any other veteran of the business can attest, taking care of young children can be hard, stressful, and, yes, risky work. Every day, teachers and aides carry heavy loads, many of which are squirming or screaming. They see more runny noses and cases of pinkeye (conjunctivitis) than the average pediatrician does. They run themselves ragged trying to keep up with several bundles of energy at a time. And most of them endure it all despite lousy pay (median income in 2006: $17,630) and no health insurance.

For many years, the plight of daycare workers went largely unnoticed, but not anymore. Job-safety experts are beginning to document the hazards of the work and are finding ways to prevent illness and injuries. On another front, unions and other organizations are pushing for higher salaries and health benefits for daycare workers. "We all care so much for children, why can't we care for the people who are watching over them?" asks Vickie Milhouse, long-time daycare worker and President of the United Child Care Union in Philadelphia.

Any gameplan for protecting daycare workers has to start with germs. Daycare centers are notorious breeding grounds for infectious diseases, and workers can be just as vulnerable as children. The journal Occupational Medicine published a checklist of diseases that can come with the job, including chicken pox, mumps, influenza, tuberculosis, meningitis, strep throat, and infections of cytomegalovirus (CMV), a virus that can cause severe birth defects when contracted by pregnant women.

Workers who frequently change dirty diapers can also catch hepatitis A and intestinal ailments such as ringworm and giardia.

Good hygiene can stop many of these diseases cold. By washing their hands frequently and by keeping changing stations and eating areas clean, workers can dramatically improve their chances of staying healthy -- as well as those of their small charges. (When changing diapers, for example, workers should wear disposable gloves and wash their hands immediately afterwards.) For extra protection, they should also consider hepatitis A vaccinations and yearly flu shots.

Of course, daycare workers would also be safer if more parents kept their sick kids at home. That's not likely to happen, so it pays to be vigilant, Milhouse says. "We kept a sharp eye out as kids come in," she says. "If we thought we saw something out of the ordinary, we'd call the parents."

With all of those sniffling children around, daycare workers may be surprised to learn that injuries are almost as common as illnesses in their profession. In 2007, the Bureau of Labor Statistics reported more than 14,000 on-the-job injuries.

Most of those injuries aren't exactly mysteries. It's easy to fall when chasing a 2-year-old through a minefield of toys, and it's easy to strain something when crawling around on the floor. And as Quillen found out, it's also easy to throw out a back when lifting a wriggling 30-pound package. A survey of childcare workers in Minnesota found that half of all back injuries occurred while lifting children.

There's no good way to make kids lighter and less wiggly, but daycare workers can still prevent many injuries. One obvious step is to pick up toys and other clutter from underfoot. According to a recent article in the Journal of Occupational Medicine, you can also protect yourselves by adjusting cribs and changing tables to comfortable heights and learning proper lifting techniques.

When picking up a preschooler, for example, position yourself in front of your small charge, with one foot slightly in front for balance. Then slowly squat down, bending your knees rather than your back and stomach. Use both your hands to lift the child and bring him or her close to your body, remembering to lift with your legs, not your back. Afterward, set the child down gently by squatting down and bending your legs. Of course, physical strain isn't the only danger when wrangling a roomful of kids. "It's an emotionally exhausting job," Milhouse says. Keeping children safe, happy, and generally under control takes constant vigilance, she says.

The real source of stress

But when daycare workers complain about their jobs, they rarely mention kids. The real source of stress, Milhouse says, is a chronic shortage of respect and dignity. This is evident when some parents are chronically late picking up their children, forcing the daycare workers to put their lives on hold until they breeze in the door. "Few people understand the work we do," she says. "We're not babysitters. We're professionals, and we teach children through play." The lack of respect is most obvious when daycare workers pick up their paychecks, she says.

Hoping to win back some of that respect, Milhouse helped form the United Child Care Providers Union (UCCPU) in 1998. As the union ranks grow, more and more daycare workers will get the salaries and health benefits they deserve, she says. Of course, not every center can afford to pay union wages, and not every worker has the chance to join the UCCPU or any other union. For them, daycare work may continue to be unrewarding -- at least when it comes to money.

The ABCs of Safe and Healthy Child Care. Centers for Disease Control and Prevention.