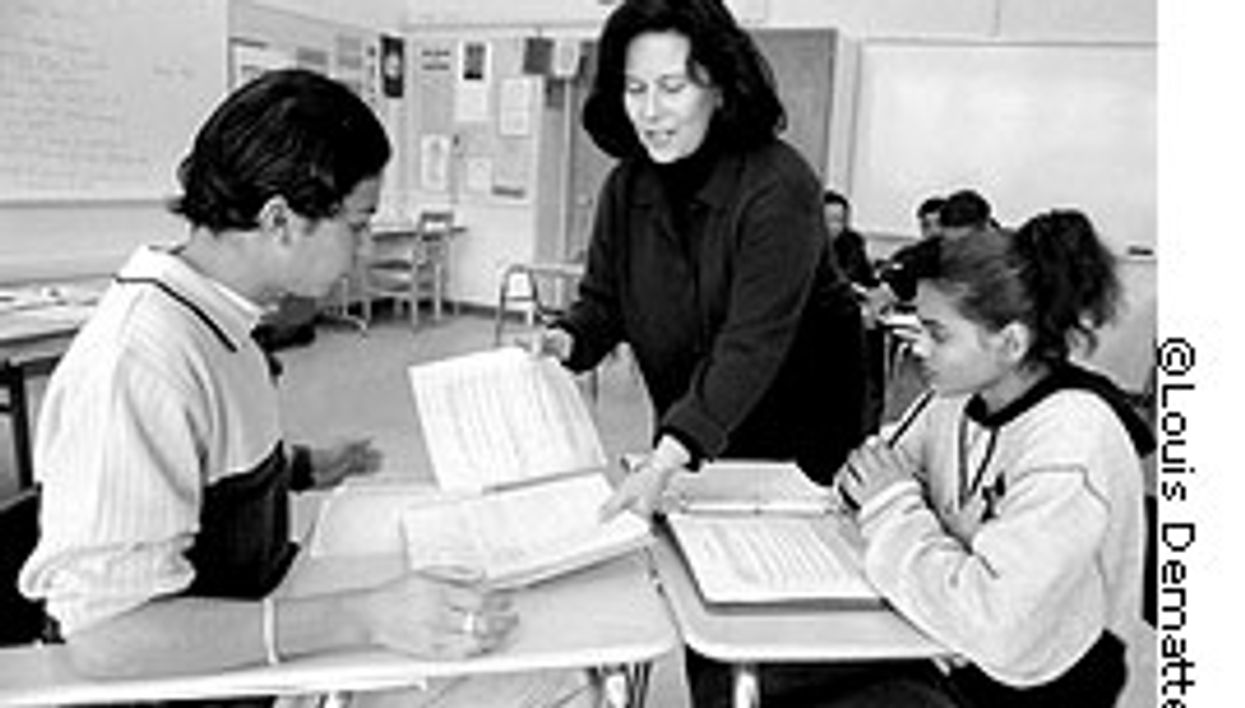 At only 32, Katie Sedgwick is tired. She's so tired that when she finishes her workday, it's all she can do to eat dinner, climb into bed and start the whole cycle again the next day.

She's not a coal miner or an assembly-line worker but a teacher in a first-grade classroom.

Five days a week, Sedgwick is on mandatory, unpaid overtime just to keep up. On the books, her hours are 7:30 a.m. to 2:00 p.m. But her real hours are 6:30 to 5:30, with more time spent on the weekends to prepare for classes and create lesson plans. Some days, it's four hours on duty before she can break free to go to the bathroom.

And those aren't the only problems. The elementary school where Sedgwick works is so bereft of supplies, she figures she spends about $1,000 a year from her $40,000 salary buying books, scissors, markers, and other materials that neither the school nor the parents can afford. Other teachers say they spend similar amounts. One group of teachers, for example, has demonstrated at major San Francisco thoroughfares to raise public consciousness, bearing signs like "Got Books? We Don't."

"The hardest thing about this job is the stress level," Sedgwick says.

Teachers' organizations say Sedgwick's struggles are common: too much work, constant scrounging for basic tools of the trade like books, and performing too many nonteaching duties. Throw in student poverty, threats of violence, and uninvolved parents, and you've got a prescription for exhausted, overextended employees. Not surprising, a 1990 study from Johns Hopkins University found that teachers' rate of stress-related depressive disorders is second only to that of lawyers. At the time she was interviewed for this article, Sedgwick knew of at least four teachers at her school who had broken out in hives due to stress.

Sedgwick says that most students at her school live at or near the federal poverty level, making her job that much harder. "A lot of our kids come in with no experience with books. They don't have them in their homes. They've never been read to," she says. "Books are a huge issue. We're expected to have this big library, and the teachers are the ones who buy all the books."

In five years, Sedgwick has been treated three times for job-related back sprains, once recently. "I have a six-year-old in my class, and every single day he picks up something and throws it -- chairs, pencils, anything that's around. The other day, I had to physically restrain him and carry him to the office kicking and screaming. I strained my ankle and my back." The teachers at her school have to handle most behavior problems, injuries, and sick students by themselves, she says. "We have no nurse, no counselor, and no psychologist." No moving man, either. When it's time to pack up for the summer, it's Sedgwick who has to box up her teaching materials and haul the boxes herself down three flights of stairs, across two streets, and up some more stairs to put them into storage.

So why does she stay in a job that's so draining? "I love the kids," she says. "They're so inquisitive. When you see that light bulb go on it's like nothing else. The beginning literacy, when they just catch on to reading, is so exciting for them, and it's so exciting for me." It's just that after five years, Sedgwick wonders how long she can stand the working conditions.

The ongoing national teacher shortage suggests that others are wondering the same thing. In some areas, the dearth of classroom teachers has become so severe that some school districts have offered "signing bonuses" in the form of down payments for homes in order to attract new talent. Teachers generally earn less money than many other professionals with the same amount of education and work experience, and many of them have to put up with working in dilapidated buildings that threaten their health because of dust and mold.

The average school in the United States is 42 years old; in low-income areas many are much older, according to the American Federation of Teachers (AFT). One-third of all elementary and secondary schools in the United States need extensive repair or renovation -- from plumbing to ventilation. Many of these schools have rotting roofs and moldy walls. Some schools lack enough janitors to keep up with the dirt and vandalism and are plagued with rats and fetid bathrooms.

Jill Taff's classroom is directly above an aged boiler room dating back to 1915 at Chapman Junior High School in Farmington, Illinois. For the rest of her floor to get heat, her room regularly reaches 80 degrees in winter. At Balboa High School in San Francisco, the gym has rats, ceiling tiles are missing from many classrooms, and window shades don't work.

But schools need not be old or in low-income neighborhoods to present severe risks to students' and teachers' health. After Minneapolis teacher John Abercrombie (not his real name) took a job at a brand-new school, he and other teachers began having respiratory problems and eye irritation.

"I was sick every year," says the 54-year-old teacher. "Many people were. I had something that always felt like the flu without a fever. I'd usually get it twice a year, and it would last for weeks."

On frequent trips to doctors, Abercrombie and his colleagues were diagnosed variously with bronchitis, pneumonia, and asthma. Six years after the school opened, a teacher noticed a suspicious spot of mold on some tiles along the wall. While school was in session, the affected tiles were destroyed. "Two days after they did that, I was never so sick in my life," says Abercrombie. It turned out that the school's sprinkler system had been leaking since the building first opened, and the walls had become a lush breeding ground for molds. Abercrombie recovered his health as soon as he moved to a job in another school.

"There's an epidemic of indoor air-quality problems that is really having an impact on schoolteachers," says Darryl Alexander, the director of occupational and environmental health and safety for the American Federation of Teachers (AFT). "We've let our infrastructure fall into disrepair. Lots of roofs are leaking, a lot of mold is growing in our schools, and people are in portable buildings with poor indoor air quality."

Throughout the 1990s, children's access to guns was an ongoing concern, with an increasing number of reports of children bringing guns to school -- and using them. There were four reports of multiple shootings by students in suburban schools during those 10 years, and in the 1998-99 school year, schools expelled more than 3,500 students for coming to school carrying firearms. Guns remained an issue even as overall school crime decreased over the 1990s. But faith in school as a relatively safe haven was horrifically shattered in April, 1999, when two heavily armed students at Columbine High School in suburban Colorado opened fire, killing 12 students and a business teacher and wounding 23 others before killing themselves. The massacre spawned a rash of incidents involving kids and guns and renewed discussions about metal detectors and armed guards in schools.

Much of that initial shock from Columbine has dissipated, but school shooting incidents and other violence in schools remain an issue for both students and teachers. The 2006 Indicators of School Crime and Safety, published jointly by the National Center for Education Statistics and the U.S. Department of Justice, concludes that while overall victimization rates have declined significantly, Violence, theft, drugs, and weapons continue to pose problems in schools. In fact, almost 600,000 students were victims of violent crimes and 8 percent of students were threatened or injured with a weapon on school property, according to the statistics in the report.

Many teachers say their fear of being personally assaulted at school is overshadowed by many other concerns, such as the affect that violence has on their students.

When Sedgwick was teaching fourth grade last year, a consultant came to her classroom to talk to her students about guns. When he asked how many of the children knew someone who had been shot, Sedgwick says 90 percent of the kids raised their hands. "For me, teaching first grade, I don't really worry about it (happening to me). As far as it happening to my kids...it's already happened," she says.

Of course, teachers, like everyone else, have more mundane health risks, too. An educator's voice is one of the greatest tools of the trade, but it's often abused as teachers raise their voices to make themselves heard above the din of their students, particularly in large classrooms.

"Right now," says AFT's Alexander, "my basic advice is if teachers start to experience any sort of hoarseness or symptoms, they shouldn't ignore them or self-treat. They should see a physician right away." She suggests seeing a voice trainer to learn how to avoid straining the voice. In larger classrooms, microphones would be useful as well. Some teachers suggest making video or audiotapes of the most basic lessons to play for students on bad throat days.

And finally, teachers often say they suffer from a public perception that what they do for a living is just a temp job on the way to finding a career suitable for grown-ups. Teacher Gary Conklin found this so irksome that he wrote an opinion piece in the Louisville Courier-Journal giving advice on the proper way to treat a teacher.

"When you run into an acquaintance who you know has been teaching, do not say, 'So, are you still a teacher?' Of all the subtle and unintended indignities a teacher must endure, that, to me, is the worst," Conklin wrote. "Do you ask, 'Are you still a surgeon?' Or, 'Are you still a corporate litigator?'

"Of course not. Teaching is a profession, not just a temporary stop on the way to real life... Indeed, some do move on, but most of us -- the best of us -- are in for the duration. Respect that commitment."