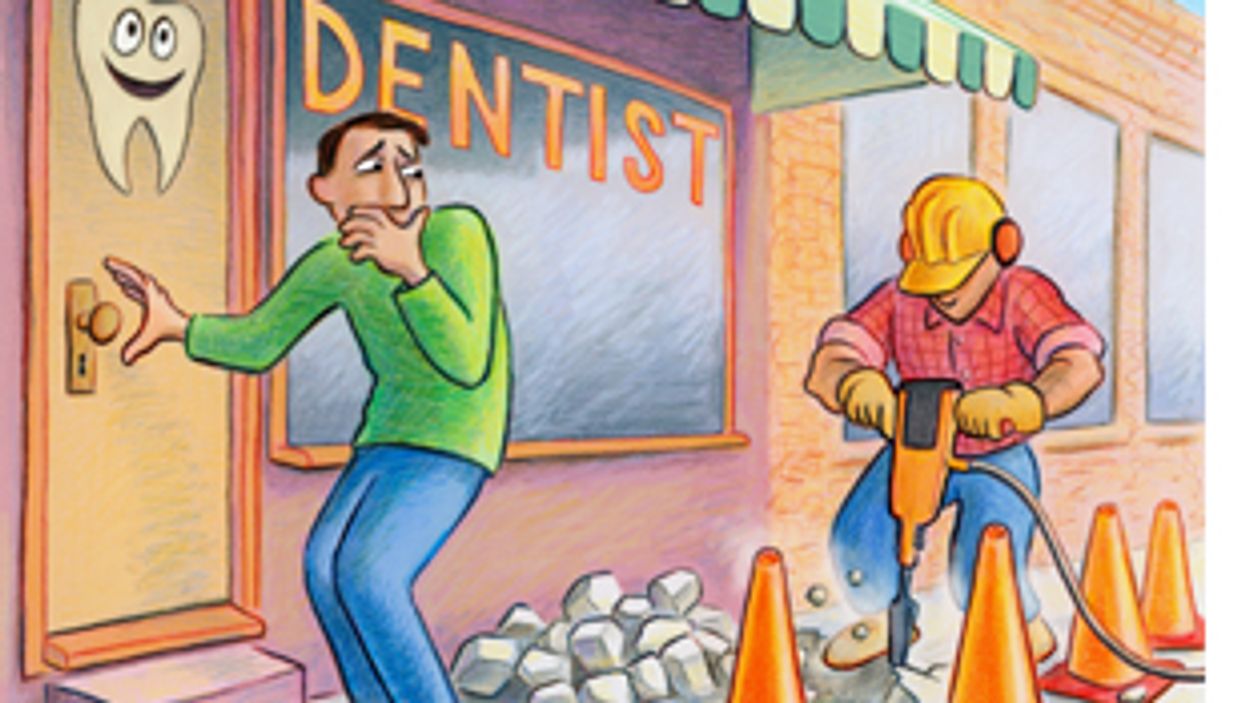 Tim Day is a master sergeant in the Air Force. When the Gulf War erupted in the early 1990s, he was one of the first to volunteer for Operation Desert Storm. He also runs three miles a day and plays full contact football, often emerging from games bloodied and bruised. But he is so terrified of seeing a dentist that he refused to get his teeth cleaned for nine years. Now when it's time for a routine visit to the dentist, his wife lures him into the car on a pretext, and only when his seatbelt is fastened and her foot is on the gas pedal does she reveal where they're going.

"Send me to Desert Storm, send me to Iraq," Day said recently while awaiting a dental exam. "You can have people shoot at me, but don't send me to the dental clinic. I may die or get blown up, but I prefer to do that than sit in this chair right here."

Day's case may strike some people as extreme, but he is not alone in his fears. An estimated 40 million Americans refuse to go to the dentist out of fear, according to the Academy of General Dentistry. In fact, millions of patients live with dental problems because they're afraid of undergoing the procedures to fix them, a dread that in its extreme form is called odontophobia. Like Day, some people would rather endure danger or the throbbing pain of a toothache than visit a dentist.

What's behind this dental phobia? "For most people, it's the anticipation of the pain rather than the pain itself," says Dr. Ed Carlson, who ultimately became Tim Day's dentist.

The number one cause of dental anxiety is the memory of an unpleasant experience, such as a cut lip, that occurred in the dentist's chair, according to researchers. Patients who as children were held down in a chair against their will, or whose dentist ignored their protests of pain, may also relive that feeling of panic and helplessness when they visit a dentist as adults.

But childhood dental trauma doesn't explain why soldier Tim Day wants to cut and run at the prospect of a simple cleaning. That level of dental phobia usually stems from two factors inherent to dentistry: the intrusive nature of the work and the patient's loss of control, according to Dr. Matthew Messina, a spokesman for the American Dental Association. "In order for me to treat you, as a dentist I have to get into your personal space," says Messina, who has a private dental practice in Cleveland. "I have to be closer to you than almost any other physician gets -- at least while the patient is awake."

Then there's the matter of how helpless you are while someone does unsettling things in your mouth. Not only is the whole thing uncomfortable, but you've lost your ability to communicate verbally. During a procedure, a patient is usually trapped in a chair with his jaws open, looking at the ceiling without being able to see what the dentist is doing -- making it easier to envision a dreaded event. Tim Day, for example, obsesses about the terrible pain he would feel if someone jabbed a dental pick into his tender gums. Ironically, the combat training that makes Day highly attuned to physical threats may be the very thing that makes it hard for him to give up control in the dentist's chair.

The worst thing about dental anxiety may be that it's a self-fulfilling prophecy. The more you avoid going to the dentist, the worse it will be when you finally go, possibly involving more invasive procedures and potentially more pain. Fortunately, dentists now recognize that dental anxiety is a problem for many people, and have techniques to alleviate it.

The American Dental Association, for example, endorses the use of simple relaxation techniques, as well as sedatives if necessary. If dentists ignore patients' pain and anxiety, the ADA says in a policy statement, "numerous dental procedures are virtually impossible, and many patients do not seek needed dental treatment."

Most patients are particularly nervous about getting an injection, says Carlson -- a fear that the profession has responded to. "We've been able to minimize that by using smaller gauge needles and better techniques," he says. "We work harder to make that less uncomfortable."

Occasionally a wisdom tooth extraction can be more painful than expected, as can periodontal surgery, says Carlson. But new techniques make filling small cavities and routine extractions almost pain-free, although in some cases there will be minor discomfort after the anesthesia wears off.

Of course, sedatives and good technique alone aren't enough. One of the most effective ways to control anxiety is an old-fashioned one: establishing trust with your patients, according to Dr. Howard Weiner, a professor of behavioral science and dentistry at Tufts University School of Dental Medicine who has studied dental anxiety for 20 years.

In the old days of loud dentists' drills, it was the drill itself that patients most feared. Now the most prevalent cause of dental anxiety is trauma from past dental visits, but right behind that is something new: worry triggered when a dentist appears rushed, according to Weiner. "Society has changed," Weiner says. "We have different fears now."

Patients become anxious when they feel that a dentist isn't taking the time to listen to concerns, answer questions, or explain the risks and benefits of different treatments, according to Weiner. In addition, patients may worry about whether the anesthetic will wear off too soon, whether the numbness they experience (from an anesthetic) is safe, and whether the dental instruments are clean. Although the current level of sterilization used in dentistry kills dangerous germs, including HIV, some people are still fearful that dental instruments could spread AIDS. All these stressful aspects of the experience, according to Weiner, may trigger a chemical imbalance in the brain that causes the unhappy patient to panic.

Although such panic is distressing for patients and staff alike, some providers have found creative ways to derail their patients' fears. In an article for the Journal of the Canadian Dental Association, dental office manager Linda Tabakman recalls comforting and ultimately winning over a 10-year-old patient in the throes of a full-blown panic attack.

The boy had been in pain for two days and was there to get two abscessed teeth extracted. Tabakman said that when she heard him whimpering before the procedure began, she sat next to him and started massaging his hands. She told the youngster she was sorry he was in pain, and decided to give him some control by letting him choose whether to go through with the procedure that day or come back another day. He decided to stay, and he began to feel better about what was coming. She taught him breathing techniques and breathed with him while he got his teeth pulled. When it was over, the youngster said it was the "best extraction" he had ever had. Over time, he also became a loyal patient.

From music to massage

Like the 10-year-old, there are things you can do for yourself to lessen dental phobia. First you have to realize that it's a fear that can be overcome, according to the Dental Phobia Treatment Center of New York. Good communication with your dentist and staff is vital, and if you don't have that, find another dentist, the group says. Be honest about both your fears and the amount of treatment you think you can tolerate at one time. Learn some relaxation techniques, and consider bringing your own portable CD player with music you find soothing.

Remember, too, that dentistry has come a long way from the stiff upper lip days that many baby boomers had to endure when they visited the dentist. In the 1960s and 1970s, some dentists were so impressed by the high-speed drills that allowed them to fill cavities in just a few minutes that they often eschewed anesthetics altogether and made patients grin and bear it.

Today, the old standby Novocain has been abandoned in favor of more than a dozen anesthetics that allow dentists to fine-tune pain relief. "I can get you really numb for six hours, sort of numb for an hour, and everything in between," says Messina.

Weiner says one thing that helps patients relax is explaining simple procedures to them, such as what anesthesia will be used and how long it will be effective. For example, when a dentist uses an anesthetic in order to work on a lower tooth, the entire lower lip should be numb. If it isn't, the patient is likely to feel pain. Providing information like this helps make patients active participants in their own care. Agreeing on hand signals for when a patient is uncomfortable or needs a break can also help patients feel more in control.

Many dentists employ high-tech ways of taking the edge off, including virtual reality goggles that allow patients to watch television (although viewing the movie The Marathon Man or an episode of The Sopranos might not calm you down). Some patients listen to soft music while they're being treated.

For needle-phobic patients, there are alternatives such as electrical anesthesia, which uses electricity to trick the body's nervous system out of feeling pain. In extreme cases, a dentist can use general anesthesia for sedation.

Some patients take an oral sedative before going to the dentist to lessen the fear, but this can affect your ability to drive to the office. Depending on the dosage, patients can be semiconscious or completely unconscious during treatment. About a third of dentists use nitrous oxide to sedate patients who are anxious. The advantage is that a patient doesn't have to be completely anesthetized, and can recover quickly enough to drive home after being treated.

Recently, many dentists have adopted unorthodox approaches to inducing relaxation. Some burn aromatherapy candles and even provide relaxation services normally found in spas, such as manicures or foot and back massages. Although patients say they enjoy being at the dentist's office when they're getting pampered, science has yet to confirm whether such services actually relieve anxiety.

Messina thinks the best cure for dental anxiety is taking time to communicate. "There has to be a level of trust established," Messina says, echoing Dr. Weiner's belief. Not only dentists but hygienists who work with patients need to be sympathetic to a patient's fears, explaining what they're doing and being responsive when people feel pain.

Patients also need to voice their concerns before being treated. "The best thing you can do is be honest with yourself and your dentist that you're nervous," Messina says. He suggests that you be open about your past experiences. Not only will that help your dentist treat you, but you may be reassured to discover that dental procedures you once found traumatizing have improved.

For Tim Day, the moment of truth came when the Air Force gave him an ultimatum: See a dentist or be taken off the list of people who are combat-ready. Fortunately, Day had a recommendation from his wife, whose dentist was Ed Carlson. Carlson's wife, Dawn, is also a dental hygienist in his office. She, too, was able to establish a good rapport with the sergeant and put him at ease.