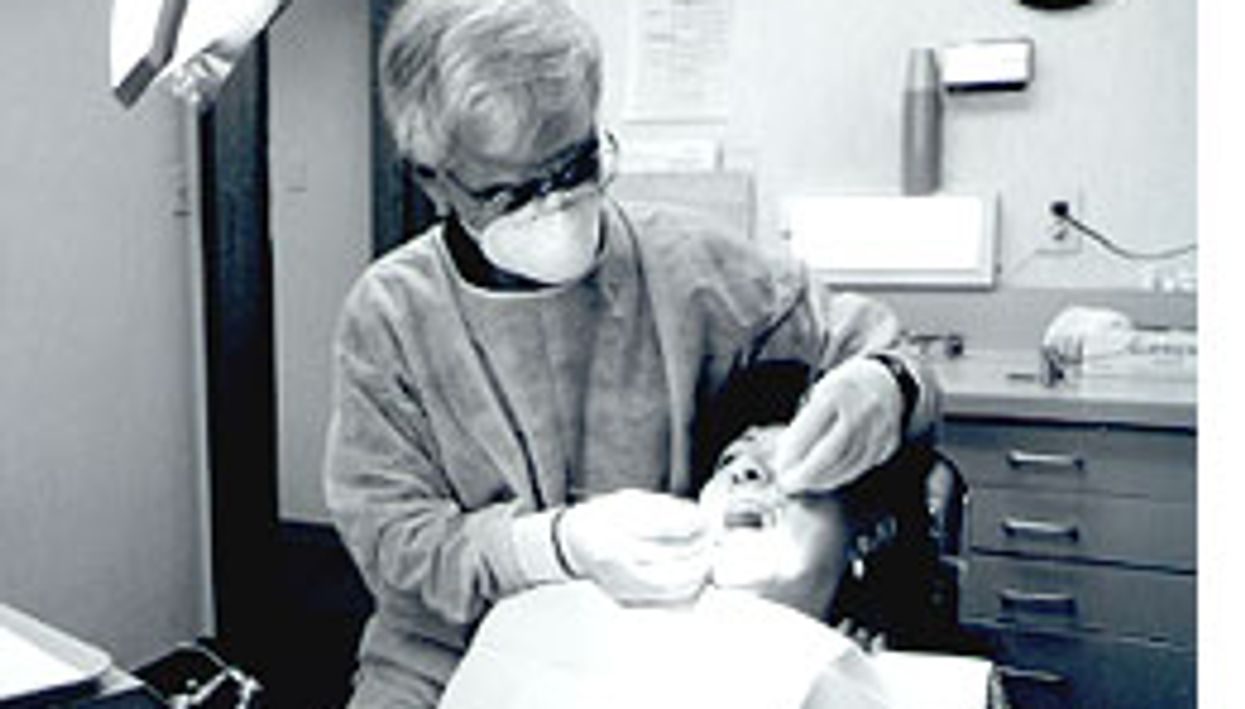 As a dentist for more than 30 years, Mike Downing, DDS, of Billings, Montana, has seen human fear in all its forms, from nervous twitches and darting eyes to outright crying -- and not just from kids, either.

But when Downing puts on his mask and picks up a drill, he feels calm and confident. In the end, most patients relax after a little small talk. And while dentistry can be a tricky and stressful business, he knows there's really nothing to fear.

With all the sharp instruments on their trays, with all the time they spend with their fingers in people's mouths, and with the specter of AIDS, hepatitis, and other blood-borne diseases, it may seem like dentists are in constant peril. But according to a report in the Journal of the American Dental Association, "The field is no more dangerous than any other profession -- and less than most."

The journal reports that the average dentist misses fewer than two workdays because of illness each year, far below the national average. Even more impressive, the lifetime risk of dying on the job is about one in 50,000, putting dentists in a dead heat with librarians for the least endangered workers in America.

A careful dentist can generally avoid the risks of the job. Like any dentist worth his drill, Downing wears gloves and a mask for every procedure, changes gloves between patients, and is scrupulously careful with needles and other sharp instruments. "You have to treat all patients as if they had AIDS," he says.

Among dentists, the most common allergic reaction is contact dermatitis, a skin rash that in some cases can be serious enough to be disabling, according to a report in the European Journal of Oral Science. Resin-based materials are a particular culprit because they can easily penetrate latex and vinyl gloves, the report added. And if you have a latex allergy, latex gloves themselves may cause rashes.

"A dentist's concerns aren't that much different from a physician's or a surgeon's," says Dr. Kenneth Burrell, the senior director of the Council on Scientific Affairs for the American Dental Association. "Like doctors, they must take care with blood-borne pathogens and allergies to latex and acrylics and resins used in their practice."

Of course, the average surgeon doesn't have to worry about getting bitten. But according to Downing, dentists aren't in much danger either. In all his years in the profession, he's never had a patient bite him hard enough to break the skin. One little kid came close: "I told him to close when I meant to say open," Downing says.

There's another hazard unique to dentists: laughing gas. A study of 70 dentists and dental assistants in Nebraska found that their exposure to nitrous oxide (used in many compressed-gas devices) was roughly twice the safety threshold. Reports have linked exposure to high levels of nitrous oxide to behavioral problems as well as infertility in both men and women. Dentists can protect themselves by periodically testing for leaks in all fittings and connections carrying nitrous oxide.

In addition, researchers have found a link between dentists' on-the-job exposure to elemental mercury and tremor. The good news is that with better equipment, dentists' exposure to mercury is approaching that of the general population.

If only there was a way to clear the office of stress, too. Many dentists say they feel harried, and for good reason. "Dentists are always focused on the clock, trying to finish whatever dental procedure they're doing in time for the next patient," says Dr. Lois Winter, who counseled scores of dentists and dental students during her 26 years as an associate professor of practice management and behavioral science at the New York University Dental School. "At the dentist's office, you never see a waiting room full of people, the way you do at the doctor. People won't wait an hour to see their dentist."

Rushing from patient to patient does have an upside: That way, dentists don't have time to soak in a patient's fear and distrust. "How many people walk into their dentist's office certain that the next hour will bring them pain and discomfort? Dentists are not perceived by their patients as kind, friendly healers like their doctors," Winter says. "Instead, people feel that their dentist is going to hurt them."

Dentists often connect to the negative image of their profession and in turn have low self-esteem, Winter says. "Many of the dentists I saw would say that they hated going into their office."

Is all of that stress taking a toll? It's often said that the suicide rate for dentists is especially high, but the evidence isn't clear. While some studies have pointed to above-average suicide rates, a five-year study of over 100,000 dentists conducted in the late '70s found no such trend. A 2006 study that reviewed eight years of data found that suicide rates were elevated only among older white male dentists. The Journal of the American Dental Association concludes that "the notion that dentists commit suicide more often than other professionals ... should be viewed with some skepticism."

Dr. Don Lenzi of Berkeley, California, doesn't identify at all with the image of the lonely, dispirited dentist. "That's not me,'' Lenzi says. "I get people out of pain, and they're happy," he says. "What I love about this job is that each person I work on is a little project. And when it's done, it's done. And I can stand back and look at it and say, 'That's good work.'"

Still, Lenzi acknowledges the hardest thing about his job is his relentless schedule. And since dentists can't slow down the clock, keeping patients relaxed and happy may just be the key, says Richard Rosen, DDS, a Brooklyn, New York dentist for more than 18 years. "You really have to know your patients' fear and anxieties, as well as what makes them comfortable," he says.

Downing says his biggest buffer against stress is his staff. Not only do his hygienists and receptionists put patients at ease, they take care of all of the small details and let him focus on the most rewarding part of the job: fixing teeth.

"Every patient is a new challenge," he says. "And I love being able to help. When you take care of a painful tooth, you're really improving a person's life." And his patients are always grateful -- at least once their tears have dried.

Angien, J., et al. Occupational mercury exposure in association with prevalence of multiple sclerosis and tremor among US dentists. September 2015.