Even in His Youth

When rock star Kurt Cobain took his own life, many fans blamed the death on fame itself. His cousin, a registered nurse devoted to youth suicide prevention, believes it had more to do with his history of depression, and offers advice for helping other troubled young people. 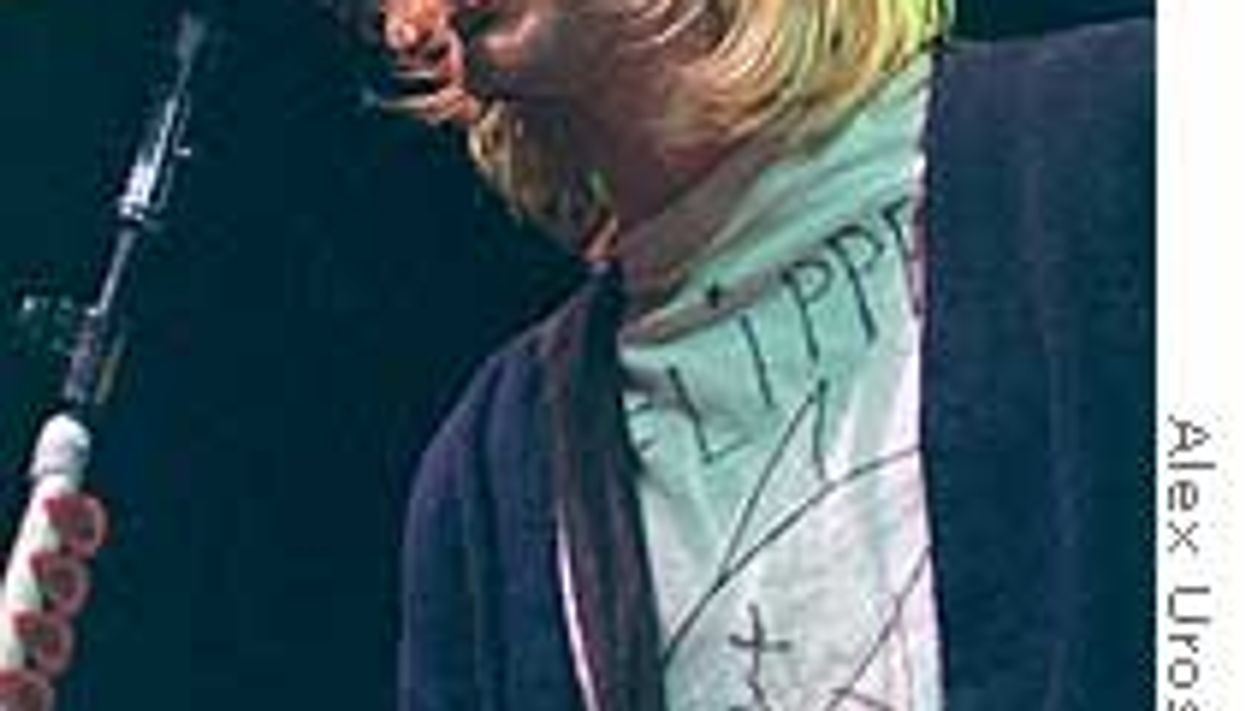 In 1994, Kurt Cobain took his life at the age of 27. Like Jimi Hendrix, Janis Joplin, Jim Morrison, and other rock stars who died young before him, Cobain has achieved a youthful immortality in which his memory endures as symbol more than man. As the reluctant poster child for Seattle's early-'90s grunge rock explosion, Cobain never adjusted to his enormous fame as leader of the band Nirvana. His suicide is often attributed to his unhappiness at having gone from proud indie rock rebel to mainstream superstar.

But no one's life is quite that simple. To cite Cobain's unwanted superstardom as the primary cause of his suicide ignores the fact that Cobain battled mental illness for most of his life.

When Kurt Cobain took his life -- the third member of the Cobain family to do so -- it was a wake-up call for his cousin. Beverly Cobain, a registered nurse who already had 15 years of experience as a mental health professional by then, rededicated her life to teaching and crusading for suicide prevention. Because she had battled depression as a teen, and because it's a leading cause of death in that age group, she chose to focus on adolescent suicide. Since then, Beverly Cobain has authored the acclaimed book When Nothing Matters Anymore: A Survival Guide for Depressed Teens, has spoken around the country about suicide prevention, and has been honored by numerous mental health and youth organizations for her efforts.

Having conquered her own demons, she quietly spends her days doing the patient work that matters to her most, stepping into the spotlight only as needed. To that end, if you think Beverly Cobain is using her cousin's death to promote her own work, you're right -- and there may be no better tribute.

She talks about it:

You were a registered nurse and mental health practitioner long before Kurt's death. How did that play a role in your work?

When Kurt killed himself, I really began to look specifically at the significance of suicide: the causes, and the horrifying prevalence of young people choosing to take their own lives. I began speaking about teen suicide to communities around the U.S. shortly afterward. Most of the training involved clinicians and professionals within the mental health field, but I felt I wasn't reaching the front lines in the battle to save kids from themselves. The focus of suicide prevention needs to be with teachers, parents, counselors, librarians, pediatricians, brothers, sisters, friends -- the people in key roles to spot kids in pain.

How high is the suicide rate for teens compared to other age groups?

Can you tell me more about Kurt in the context of the Cobain family?

The first two suicides were also Cobain males, my father's brothers, both with guns. Studies show that one suicide in a family puts other members of that family at higher risk for suicide, and that has certainly been borne out in the Cobain family. I know one of my uncles was gravely depressed at the time of his death.

How did substance abuse figure in?

Alcoholism runs rampant in the Cobain family. When I was growing up there was always alcohol and violence in our home. This was also true in Kurt's home, so it isn't surprising that he would turn to alcohol and other drugs to ease any kind of discomfort. It's my observation that the Cobain men had painfully low self-esteem, and used alcohol to relieve their inhibitions, to feel like they thought everyone else felt. So who would Kurt have had as a role model for healthy behavior and self-esteem? Where could he turn to feel good about himself?

Did Kurt have other mental health problems besides general depression?

Kurt was diagnosed at a young age with Attention Deficit Disorder [ADD], then later with bipolar disorder [also known as manic-depression]. Bipolar illness has the same characteristics as major clinical depression, but with mood swings, which present as rage, euphoria, high energy, irritability, distractability, overconfidence, and other symptoms. As Kurt undoubtedly knew, bipolar illness can be very difficult to manage, and the correct diagnosis is crucial. Unfortunately for Kurt, compliance with the appropriate treatment is also a critical factor.

Some think Kurt's suicide was related to his aversion to stardom. How much do you think suicide has to do with the life choices we make, as opposed to psychological diseases unrelated to outside factors?

I believe there is a strong possibility that Kurt would have taken his life no matter what he chose as his career. His risk was very high: untreated bipolar disorder, drug addiction, prior suicides of family members, alcohol, violence and unpredictability in his childhood, poor self-esteem, violence in his married life. Kurt could have been a poster child for risk of suicide. Also, I think you can never, ever separate the influences of mental health and environmental factors. Our decisions for ourselves arise out of those two factors. One thing about decisions is that you never know if you made the wrong one until after you make it. That said, I expect that if I'm bipolar, responsible for being a role model for millions of kids, high most of the time, and I hate myself, I probably won't make decisions that will serve me well.

Are there any ways to predict which children might become suicidal as teens? Is much of the problem hormonal?

The first thing about suicide that I like people to know is that some form of depression is almost always present in the suicidal person. This is important because if one is thinking with a depressed brain, a brain struggling to function with an imbalance of neurotransmitter chemicals, then the thought process is not very likely to be "normal" for that person. We used to think children didn't become depressed. We now know that tiny infants can be depressed, and that 5-year olds can become suicidal. So one way to predict whether a child could become suicidal is to know the signs of depression. And while we can't say yet that suicidal behavior is genetic, we do think that depression very often is. When hormones kick in for adolescents, they simply add to the stresses the teen is already dealing with, including, perhaps, depression, school issues, abuse, illness, divorce, losses, grief, genetic factors, and numerous other possible sources of stress.

Do you think that many kids on drugs are self-medicating, the way Kurt seemed to be?

Absolutely! And that's exactly what Kurt was doing. In a study by a colleague in Oregon, it was determined that many teens have major depression for an average of four and a half years before turning to alcohol and other drugs for relief. So you can see how a parent or teacher who knows the signs of depression could conceivably intervene before drugs and alcohol further impaired a child's thinking and inhibitions.

Kurt had a lot of people trying to help him get better, but he was unfortunately quite determined to end his life. Are there some suicide cases that simply can't be prevented, or do you believe everyone, theoretically, can be saved?

It would be futile to think we can save everyone who considers suicide. Young people, especially, tend to be impulsive, their emotions intense, and many have not yet developed appropriate coping capabilities. The suicidal person typically believes he is a burden to others, that others will be better off without him, and/or that there is no other way to end the pain of this dilemma.

What is the treatment for a person who is suicidal? What roles do medication, counseling, and spirituality play?

The primary treatment for depression -- the main precursor to suicide -- is both medication and talk therapy. Neither works as well alone as they both do together. Spirituality is an inner resource that is helpful in dealing with any problem, but when serious depression is present, people are most often not in touch with their inner resources, no matter how strong, how intelligent, or how spiritual the person is. So, the primary antidote for suicidal behavior, in my opinion, is the presence of caring people in one's life who know when something is wrong and who will take appropriate steps to help and support the unstable person when it is needed.

How can you help kids who don't have caring parents?

When I really press kids, I sometimes find there is at least one adult somewhere that the kid might go to in an emergency, when they will absolutely not trust a parent. This person is usually a favorite teacher or relative, or the mother of a friend. But at the risk of [voicing] gloom and doom, we have kids attempting to kill themselves at a rate of one nearly every 60 seconds, and most of them have parents who love them dearly.

What can parents do when they see warning signs?

This is a scary question because most kids stop communicating personal feelings in an honest way as pre-teens, but parents don't realize it. I've found that most teens don't feel comfortable confiding in ANY adult. They will talk to their friends, who often don't take them seriously, or who try to "fix" the problem without telling an adult. This can, and often does, lead to disaster. I would tell parents and others who see warning signs to take them very seriously. Have the teen evaluated for depression by a professional, ideally a child psychiatrist, as soon as possible, even if you have to bribe him. Don't try to fix what's going on. The child doesn't think you understand, so it will be much easier for a professional to work with the child than for a parent who may be part of the problem.