The epidemic that was halted 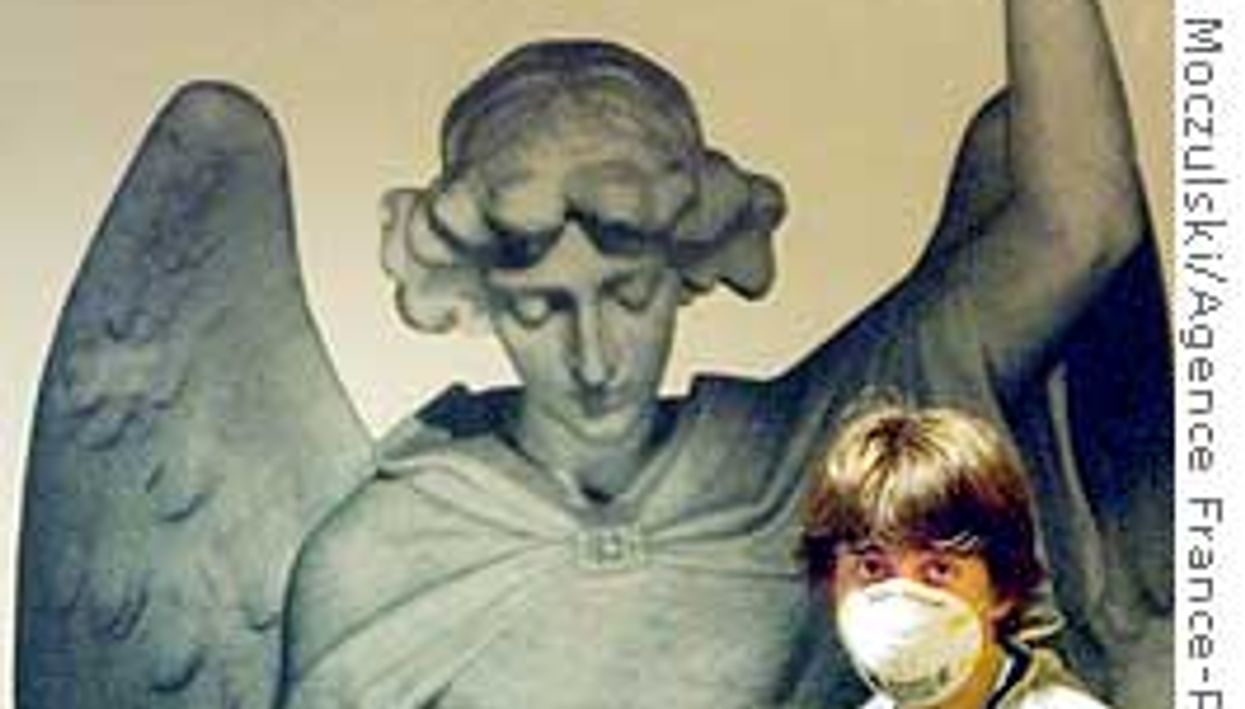 Not long ago, in the early 2000s, the disease known as "SARS" -- short for Severe Acute Respiratory Syndrome -- was causing panic in the countries affected by it. Thousands of people had been infected and hundreds killed by the new disease, a little-understood bug that traveled quickly around the globe. Even the economies of those areas hardest hit by the disease -- China, Hong Kong, Taiwan and Toronto, Canada -- were threatened by the SARS virus. In the United States, where 33 people were infected the first year it showed up, the Centers for Disease Control and Prevention (CDC) committed more than 800 health experts and employees to investigate and help control the potential epidemic.

The SARS outbreak appears to be history for now. No new infections anywhere in the world have been reported since 2004.

But public health officials have not ruled out the possibility of another outbreak in the future. A few experts have even speculated that SARS could re-emerge during any influenza season, which usually begins in November. Keep in mind that the risk of contracting SARS today is very low, but it's best to be prepared and know how to protect yourself in the event of another outbreak.

Severe acute respiratory syndrome is an infectious disease that appeared in China in late 2002, but wasn't recognized as a new illness until the end of February 2003. The name tells much of the story: The disease is severe, it comes on suddenly (acutely), and it attacks the lungs (respiratory system).

The World Health Organization calls SARS an "atypical pneumonia." That's because SARS behaves like pneumonia, but most cases of pneumonia are caused by well-known bacteria, viruses, and fungi -- not "atypical" agents like the virus causing SARS. Another important difference is that healthy adults seem more vulnerable to SARS than to typical pneumonia, which is generally more dangerous to children, the elderly, and people with weakened immune systems. In a Newsday analysis of Hong Kong cases from February 22 to March 22 of 2003, the mean age of patients was 52. Few patients smoked or had existing health problems that would put them at higher-than-normal risk.

The international efforts to quarantine and treat those infected with SARS, as well as the careful screening of travelers from SARS-infected areas of the world, helped contain its outbreak. At its height, there were 8,096 confirmed cases of SARS worldwide and 774 deaths. In the United States, there were 27 cases and no fatalities. The speed with which SARS spread led many experts at the time to compare the outbreak to the flu pandemic of 1918, which claimed 20 to 40 million lives. But the SARS outbreak turned out to be tiny in comparison.

Is SARS a new disease? Where did it come from?

Scientists still aren't exactly sure what causes SARS, or how and where it originated. Current evidence points to a prime suspect: a new strain of a usually mild virus known as a coronavirus that may have originated in mainland China, where the earliest cases developed. When viewed under a microscope, coronaviruses appear to have a crown or halo (corona). This type of virus is one cause of the common cold in humans; it also causes respiratory, gastrointestinal, and neurological illness in animals. Somehow, it may have found a way to mutate into a more dangerous form.

Working at a speed described as "stunning" by the World Health Organization, Canadian scientists were able to break the genetic code of the virus suspected of causing SARS and sequence its genome. Two days after the Canadian draft was published, the Centers for Disease Control and Prevention published its own sequence, which featured an additional element at one end of the virus. This type of viral mapping -- which, in the case of the AIDS virus, took several long years -- is crucial in developing a diagnostic test for the SARS virus, and possibly a vaccine as well.

Earlier, the virus appeared to be most closely related to one found in birds, according to molecular data obtained by a researcher at the University of California in San Francisco. The Chinese Center for Disease Control and Prevention has also reported that early victims in China ate or handled birds, including ducks, chickens, pigeons, and owls, and it was conducting further investigations into a possible connection. A coronavirus very similar to the SARS virus was found in civet cats in China, and some researchers speculate that the cats, which are considered a delicacy in China, may be the source of the disease. Canadian researchers, however, have reported that the genome appears to be a "completely new" coronavirus unrelated to any known animal or human viruses.

How common is SARS, and who's at risk?

According to the World Health Organization, the vast majority of people who contracted SARS lived in Asia or had been in very close contact with someone who recently visited Asia. Most patients caught the illness in mainland China, the suspected birthplace of the disease. Other hot spots included Hong Kong, Singapore, Canada, and Vietnam.

Almost all of the U.S. patients became infected while traveling in these areas. Family members or others caring for a SARS patient -- including health-care workers who did not follow strict infection control procedures -- were also considered to be at risk. In the U.S., SARS was not spread in the wider community.

How is SARS diagnosed?

At the beginning of the outbreak, the medical community had difficulty diagnosing SARS and differentiating it from pneumonia or other respiratory diseases. But several laboratory tests are now available to detect the SARS virus. Doctors first evaluate a patient's symptoms and determine whether he or she might have been exposed to the virus. Next, doctors will likely test for the specific antibodies the body produces against the suspect coronavirus. Today, the virus may also be detected through a reverse polymerase chain reaction test and/or a viral culture.

What are the symptoms of SARS?

As reported by the CDC, people with SARS typically start feeling sick within two to seven days of catching the virus. The first hint of trouble is usually a fever, sometimes accompanied by flu-like symptoms such as chills, body aches, or an all-over "sick" feeling. Many people also have a dry cough and other respiratory symptoms, such as difficulty in breathing, a sign that the virus is affecting the lungs.

If you're worried about catching SARS, here's what the CDC says you should look for:

More often than not, the disease doesn't get any worse and the symptoms fade. In other cases, people have difficulty breathing as the illness progresses, and 10 to 20 percent of patients have to be put on a ventilator.

How is SARS treated?

It's unclear precisely what works, but the CDC recommends that patients with SARS be treated similarly to those with atypical pneumonia. This regimen might include antibiotics, antiviral drugs, and steroids. Some patients with severe-enough breathing problems have been placed on a ventilator.

In the 2002-2003 epidemic, close to 10 percent of those infected with SARS died. While these may not seem like encouraging odds, it's actually much lower than the death rate among patients hospitalized with pneumococcal pneumonia. That's about 15 percent, largely because many people with this type of pneumonia already have weakened immune systems.

How can I avoid SARS?

SARS appears to be spread by droplets produced when people cough or sneeze, according to the CDC. It's possible that it may also be spread by touching objects that have become contaminated. Preliminary research shows that the virus may be able to survive in the environment for several days. Hong Kong researchers have also reported that SARS was transmitted in one apartment complex through droplets from a leaky sewage system that people then spread to common areas, such as elevators. That said, keep in mind that SARS is still rare. Only a small percentage of people who are most at risk -- such as health workers -- have actually fallen ill. However, a few people have proven very infectious.

A 26-year-old woman in Singapore carried the virus back from a trip to Hong Kong and appears to be responsible for more than 100 cases in Singapore because doctors did not know she had SARS when she was admitted to the hospital, according to a health minister in Singapore. She managed to survive, but the illness claimed both her parents.

In the United States, only one health-care worker was infected with SARS by a patient; the other cases were contracted when the patient was traveling abroad. If SARS makes a comeback, the best defense against it would be to avoid traveling to affected places. Aside from that, the CDC says that your most important precaution is to frequently wash your hands with soap and water or with alcohol-based hand rubs, and avoid touching your eyes, nose, and mouth with unwashed hands.

If, during a SARS outbreak, you happen to develop a fever along with a cough or any other breathing problem, contact a doctor immediately. Be sure to tell the doctor about your recent travels to any affected areas or exposure to at-risk people.

While SARS is rare and your chances of getting it are unlikely, it doesn't hurt to be aware of the steps you should take if you think you've been infected. If you and your doctor suspect you have SARS, the CDC advises staying home for at least 10 days after your symptoms are gone. During this time, limit contact with others, and if possible, wear a surgical mask to avoid spreading the virus to anyone.

If you live with someone who comes down with SARS or a similar illness, you should take a few simple steps to protect yourself. The CDC advises washing your hands regularly and using disposable gloves when handling items that may be contaminated with body fluids. Also avoid sharing eating utensils, towels, and bedding with the sick person.

Ever since the arrival of AIDS in the early 1980s, the world has worried about the next deadly epidemic. Every new infectious disease that comes along stirs a new round of anxiety, and SARS was certainly no exception. Whether SARS will re-emerge in the future or simply become a footnote in medical history remains to be seen. For now, there's no reason for panic and good reason for knowing the facts about SARS.

Interview with Arnold Monto, MD, professor of epidemiology at the University of Michigan.

World Health Organization. Update 94 - Preparing for the next influenza season in a world altered by SARS. July 3, 2003.