An epidemic is on the rise that may kill more people each year than AIDS. 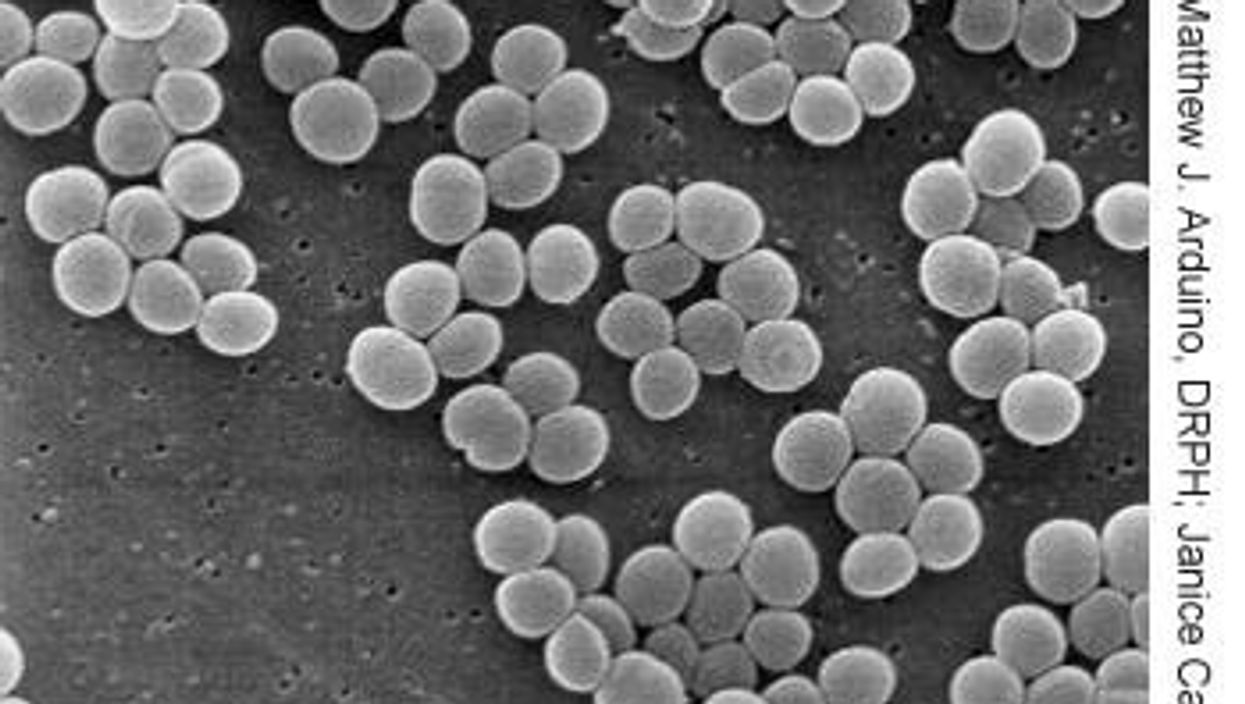 More than 90,000 Americans contract potentially life-threatening infections every year from drug-resistant staph bacteria, according to the first federal study of invasive disease caused by such infections.

The study estimates suggest that drug-resistant staph may kill more than 18,000 people a year in the United States, which would exceed the number of annual deaths caused by AIDS, according to the study, which was published by the Journal of the American Medical Association in October 2007.

The bug, known as methicillin-resistant Staphylococcus aureus, or MRSA, typically infects victims through an open skin wound, sometimes even through a small scratch. The study found that the overall incidence rate was 32 invasive infections per 100,000 people -- a figure that the journals editors called astounding.

Constanza Bermeo's* problems started with a small, seemingly insignificant sore and ended with a four-day stay in a hospital isolation unit.

While trying on shorts in a store, the 42-year-old woman from Berkeley, California, noticed what looked like a pimple on her buttocks. She scratched it in passing but didn't give it a second thought. She didn't even mention it to her doctor during a routine visit a few days later. But as several more days passed, another blemish appeared -- actually a boil -- and the entire area started throbbing with pain. She saw a doctor who ordered blood tests and referred her to a surgeon to drain the boils. By then the pain was enough to bring her to tears.

"I gave birth at home with no drugs, and this was more painful," she says. "At one point, I sat down and cried."

Bermeo's doctor prescribed antibiotics, but the infection didn't slow down. Further tests showed that she was infected with MRSA, the potentially deadly form of staph bacteria that's immune to common antibiotics, including methicillin and penicillin.

After her diagnosis, Bermeo's troubles only multiplied. She was prescribed a heavier-than-average dose of antibiotics, and after she began taking them, she developed a fever that lasted for days. Further blood tests so alarmed her doctors that she was admitted to the hospital. Her white cell count had slipped lower than that of many cancer patients. In fact, her condition warranted treatment by a cancer specialist. Her immune system was so severely compromised that she was placed in isolation in a room that visitors could enter only by suiting up and wearing surgical masks. With intravenous antibiotic treatment, she finally recovered.

Spreading at an "alarming rate"

Staph bacteria are notoriously crafty, and their evolution -- if you're not a victim -- is fascinating. Within a couple of decades of the discovery of antibiotics, some strains of staph developed a resistance to penicillin and other "wonder drugs." The germs found their home in hospitals, where they infected surgical wounds and preyed upon sick people with weak immune systems.

By the late 1990s, staph had taken another dangerous turn. Strains of antibiotic-resistant staph started attacking healthy people who hadn't been anywhere near a hospital -- people like Constanza Bermeo. In recent years, this new breed of staph -- called community-associated MRSA -- has quickly become a serious threat.

In September 2005, the National Institute of Allergy and Infectious Diseases (NIAID) reported that the germ was spreading at an "alarming rate" and causing illness ranging from mild skin infections to potentially deadly infections of the blood, heart, or lungs. The 2007 JAMA study suggests infections are an epidemic. Fatalities include a 17-year-old high school senior in Virginia, a 21-year-old college football player in Pennsylvania, and several children who seemed completely healthy before the infection.

"It's unfortunately becoming very common," says Chad Roghair, MD, a family practitioner and team physician for the University of California at Berkeley and St. Mary's College in nearby Moraga. Outbreaks of MRSA are especially common among football players and other athletes who collect nicks and cuts and spend a lot of time in germ-friendly locker rooms, he says. But in his regular practice, Roghair is seeing more and more patients like Constanza Bermeo who seemingly caught the germ out of nowhere.

One problem is that the multidrug-resistant strain of staph is disturbingly widespread: It has taken up residence in the nostrils of about 2 millions Americans, according to a study published in the Jan. 15, 2006, issue of the Journal of Infectious Diseases. These carriers are more likely than other people to come down with a MRSA infection, and they may also unwittingly spread the germ to people they come in contact with. Whenever they scratch their noses and shake hands without washing first, there's a chance that someone else will wind up harboring the germ.

The spread of MRSA outside of hospitals marks a huge step backwards in our never-ending fight against disease-causing bacteria, and experts fear that the germ will only grow more common. "It's going to get worse before it gets better," says Frank DeLeo, PhD, a scientist with the NIAID's Rocky Mountain Laboratories in Hamilton, Montana.

The germs among us

In September 2005, DeLeo and colleagues published a study that uncovered one of the germ's tricks. The study found that community-associated MRSA has a special ability to dodge white blood cells, the body's natural defenses against infections. "Community-associated MRSA infects healthy people," DeLeo says. "It has to have a mechanism to evade the immune system."

As Bermeo discovered, a case of MRSA often has very humble beginnings. The germ usually attacks the skin, where it can form a boil or a pimple-like sore. The sore is likely to be red, puffy, swollen, and painful, and it may ooze pus. Of course, not every pimple or blemish warrants a trip to the doctor. "Everybody should be aware of their own bodies," Roghair says. "If something gets bigger or spreads faster than usual, it's worth checking out."

In more severe cases, patches of skin may become red, tender, swollen, and warm to the touch. This condition, called cellulitis, can spread to the bloodstream if not controlled. Community-associated MRSA can also infect joints (septic arthritis), bones (osteomyelitis), lungs (pneumonia), and even the heart (endocarditis). In 2005, researchers from UCLA noted that community-associated MRSA was involved in a growing number of cases of necrotizing fasciitis -- more commonly called "flesh-eating disease."

Not surprisingly, the germ can also spread between family members. Five months after Bermeo recovered from her own infection, her husband developed a MRSA infection on the skin around his knee. He too suffered excruciating pain, and there was a real possibility that the infection could spread into his knee and damage the joint.

Fortunately, his doctor -- none other than Chad Roghair -- had seen plenty of MRSA infections before. He immediately put Bermeo's husband in a wheelchair and rolled him across the street to the emergency room of a Berkeley hospital for treatment with IV antibiotics. He too recovered, but it took about a month before he could bend his knee comfortably.

Most community-associated MRSA infections are still relatively easy to treat if caught in time, Roghair says. The germ is sensitive to several different types of antibiotics, including tetracycline and clindamycin. In many cases, doctors don't need to do anything more than send the patient home with a prescription for pills.

But according to Roghair, doctors are often reluctant to prescribe these MRSA-killing drugs unless they strongly suspect a MRSA infection. If they started prescribing tetracycline or clindamycin indiscriminately, staph infections could start developing a resistance to these drugs as well. A similar story has already played out in hospitals: A few strains of healthcare-associated MRSA are now resistant to vancomycin, once the gold-standard, can't-miss treatment for staph infections. That's why some experts are recommending that physicians perform skin or blood cultures that detect MRSA before prescribing antibiotics that may help the germ develop a resistance to the drugs. In the meantime, clinical trials are underway to identify treatments that dont require the use of such last-resort antibiotics.

Of course, a MRSA infection can spread quickly if a patient ends up taking the wrong antibiotic, as was the case for Bermeo. For this reason, doctors try to grow cultures of the bacteria to pinpoint the cause of the infection. This process can take days, giving the germ a chance to spread.

Minor infections might not need any medical treatment at all. Bermeo has had four more outbreaks since her first infection. In each case, a red, painful bump erupted on her skin. Instead of scratching and picking, she regularly put a warm compress on the sores, and they eventually went away without causing any trouble.

Bermeo knows that the germ is still living on her skin, so stopping future outbreaks has become her top priority. Neither she nor her husband wants to go through the pain and worry of another MRSA infection. Above all, they'll do anything to keep the germ away from their 2-year-old son. They avoid sharing personal items "We all have our own towels," Bermeo says, and they wash their hands religiously.

A devotion to cleanliness is the best way to avoid a MRSA infection, Roghair says. "If you fall down while running, wash the scrape with soap and water." He also recommends keeping all cuts and scrapes covered with a clean bandage and avoiding sharing personal items such as towels, razors, and drinking glasses. The CDC recommends that health club members take extra precautions to avoid the germ, including showering after working out and wiping off all shared equipment before and after use. It's also a good idea for gym members to keep a clean towel between themselves and any gym equipment.

*Constanza Bermeo is a pseudonym.

Interview with Frank DeLeo, PhD, a scientist with the NIAID's Rocky Mountain Laboratories in Hamilton, Montana.

Interview with Chad Roghair, MD, a family practitioner and team physician for the University of California at Berkeley and St. Mary's College in Moraga, California.

Creech II, Clarence Buddy, et al. Community-Associated Methicillin-Resistance Staphylococcus aureus: The Way to the Wound Is through the Nose: Editorial Commentary. The Journal of Infectious Diseases, 2006;193:169-171.

Center for Disease Control and Prevention. CA-MRSA information for the public. February 2005.

Minnesota Department of Health. Causes and symptoms of MRSA. October 2004.

Arnold FW, et al. An analysis of a community-acquired pathogen in a Kentucky community: Methicillin-resistant Staphylococcus aureus. The Journal of the Kentucky Medical Association. 2005 May;103(5):206-10.

Alliance for the Prudent Use of Antibiotics. Update on Antibiotic-Resistant Staph Aureus.

Arnold FW, et al. An analysis of a community-acquired pathogen in a Kentucky community: methicillin-resistant Staphylococcus aureus. The Journal of the Kentucky Medical Association. 2005 May;103(5):206-10.