Quiz: How Much Do You Know About Carbs? 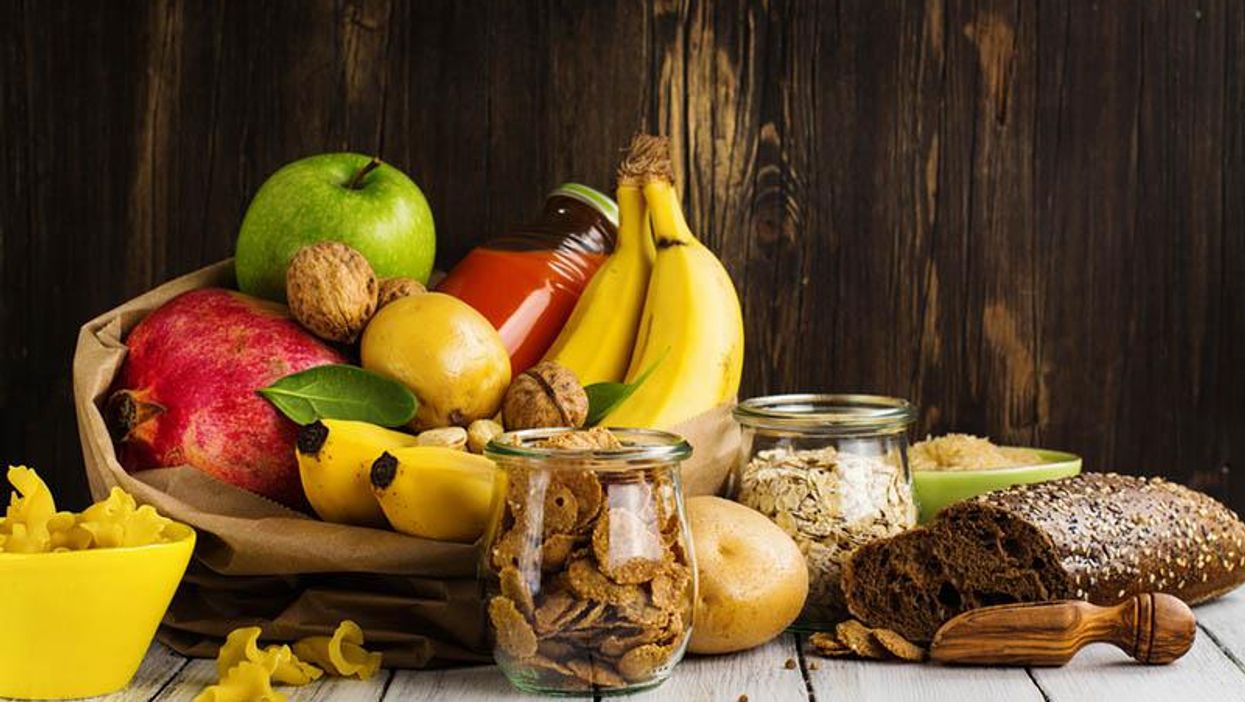 These days, everywhere you go, including supermarkets and restaurants, you see an increasing number of low-carbohydrate products. People with diabetes are advised to keep their carb count low to stay healthy. But weight-loss diets that limit carbohydrates have become so popular that now roughly one out of every five Americans counts carbs, regardless of whether they're diabetic. How did carbohydrates get such a bad rap? Find out how much you know about carbs.

1. What do carbohydrates provide for the human body?

a. Fuel for the body and brain

b. Essential vitamins and minerals

2. According to federal health officials and heart experts, what percentage of your daily calories should come from carbohydrates?

3. Some low-carb and high-protein diets -- particularly those that severely restrict carbohydrate consumption but allow a dieter to eat foods high in saturated fat -- may contribute to which of the following health problems?

e. All of the above

4. Which of the following foods does NOT have carbohydrates?

5. American adults consume more calories today than they did 30 years ago, and the increase is mainly due to higher carbohydrate intake. By what percentage do you think Americans increased their consumption of carbohydrates from 1971 to 2000?

6. What does the Glycemic Index measure?

a. The ratio of carbohydrates to fat in a particular food

b. How much and how quickly sugar gets into your bloodstream after you eat food that contains carbohydrates

c. Your weight (in kilograms) divided by your height (in meters)

d. The carbohydrate-to-sugar ratio of a food item

1. What do carbohydrates provide for the human body?

The correct answer is: a. Fuel for the body and brain

Contrary to the hype around many low-carb diets, eating carbohydrates in itself doesn't lead to weight gain. In fact, foods with complex carbs such as grains, fruits, and vegetables actually have important health benefits: They contain vitamins and minerals essential for your health, and they provide fiber to keep your digestive tract healthy and cholesterol low. Carbohydrates are your body and brain's main source of energy. Whether calories are in the form of protein, fat, or carbohydrates, if you don't burn as many as you eat, you will gain weight. That said, keep in mind that simple carbohydrates -- like sugar and processed cakes and cookies -- are packed with calories and contain almost no nutrients -- a bad bet all around if you're trying to lose weight and keep healthy.

What causes weight gain is eating large portions and taking in more calories than you expend. People who eat too many carbs usually eat too many calories. Complex carbohydrates stay with you longer and are more likely to satisfy your appetite, and so favoring complex carbohydrates such as vegetables and whole grains can actually contribute to a healthy balance of calories.

2. According to federal health officials and heart experts, what percentage of your daily calories should come from carbohydrates?

The correct answer is: c. Between 45 and 65 percent

Most nutrition experts say that it's best to get about half of your daily calories from carbohydrates, but the exact number depends on your health and activity level. The American Heart Association, for example, recommends aiming for a level between 45 and 65 percent. The Institute of Medicine, a nonprofit organization that advises the U.S. government on health and nutrition, also suggests people get between 45 and 65 percent of their daily calories from carbohydrates. On food labels, the U.S. Food and Drug Administration has set the daily carb rate at 60 percent.

So for a person on a 2,000-calorie diet, current food labels recommend eating 300 grams of carbohydrates per day. Some low-carb diets, like Atkins, limit carb intake to 20 grams per day, at least in the initial phase of the program -- a number that many nutritionists consider unhealthy. Fruits and vegetables contain carbs and have nutrients and fiber that are important in any diet.

3. Some low-carb and high-protein diets -- particularly those that severely restrict carbohydrate consumption but allow a dieter to eat foods high in saturated fat -- may contribute to which of the following health problems?

The correct answer is e. All of the above.

Some low-carb diets, such as the preliminary phase of the Atkins diet, limit dieters to 20 grams of carbs per day, or about the amount of carbs found in one banana. Severely restricting fruit and vegetable consumption deprives you of the many nutrients and vitamins your body needs. Another risk for heart disease is found in those diets that allow large quantities of foods like bacon, butter, and cheese, all of which are high in artery-clogging saturated fat. People with heart disease should be careful about eating too many fats, and they should make sure a doctor closely monitors their cholesterol.

Constipation, one of the most common complaints of low-carb dieters, is caused by a lack of fiber, which is found in carbohydrate-laden grains, fruits, and vegetables. And finally, the American Kidney Fund has cautioned that high-protein diets have the potential to cause scarring in the kidneys, which process more wastes from the high levels of protein consumed. This is especially harmful for those who already have kidney disease.

4. Which of the following foods does NOT have carbohydrates?

The correct answer is: b. Chicken

Meats are packed with protein (and fat, depending on the cut), but they contain almost no carbohydrates, unless, of course, they are breaded or marinated in a sweet sauce. One cup of whole milk has about 11 grams of carbohydrates. A half-cup of mashed potatoes has about 15 to 17 grams of carbs (depending on how it's seasoned), and a slice of store-bought bread (wheat or white) contains about 15 grams. The wheat bread, however, has more fiber and healthy nutrients than processed white bread.

5. American adults consume more calories today than they did 30 years ago, and the increase is mainly due to higher carbohydrate intake. By what percentage do you think Americans increased their consumption of carbohydrates from 1971 to 2000?

The correct answer is: b. 13 percent

According to a February 2004 study conducted by the Centers for Disease Control and Prevention (CDC), the consumption of simple carbohydrates like cookies, pasta, and nondiet soda are mostly to blame for the increase in calorie and carbohydrate consumption in the American diet. Women fared worse than men in the study: Their calorie consumption increased by 22 percent over 30 years, with the average up from 1,542 in 1971 to 1,877 in 2000. Men's overall calorie consumption jumped from 2,450 to 2,618, an increase of 7 percent. Total fat and saturated fat intakes remained about the same during the period.

6. What does the Glycemic Index measure?

The correct answer is b. How much and how quickly sugar gets into your bloodstream after you eat food that contains carbohydrates

The Glycemic Index (GI) is a measure used to distinguish "good" carbs from "bad" carbs. Carbohydrates with a "high" GI, like sugar, cause a person's blood sugar to spike quickly and then drop quickly again once the energy is burned up -- what some people refer to as a "sugar high" and "sugar crash." For years, only diabetics paid close attention to GI measures of food in order to avoid large fluctuations in their blood sugar levels -- now many physicians recommend that most people watch their blood sugars. Carbohydrates with a low GI, like whole grains and vegetables, break down slowly in the bloodstream, providing a more evenly sustained source of energy and reducing your appetite to eat more. They also tend to be higher in nutrients and fiber.

How to Read a Nutrition Facts Label. U.S. Department of Health and Human Services.

St. Jeor, S. T. et al. Dietary protein and weight reduction: A statement for healthcare professionals from the Nutrition Committee of the Council on Nutrition, Physical Activity, and Metabolism of the American Heart Association. Circulation 2001. 104: 1869-1874.