Think your job is stressful? Try plowing 20 tons of glass and metal through snarled traffic, bike messengers, and jaywalkers. 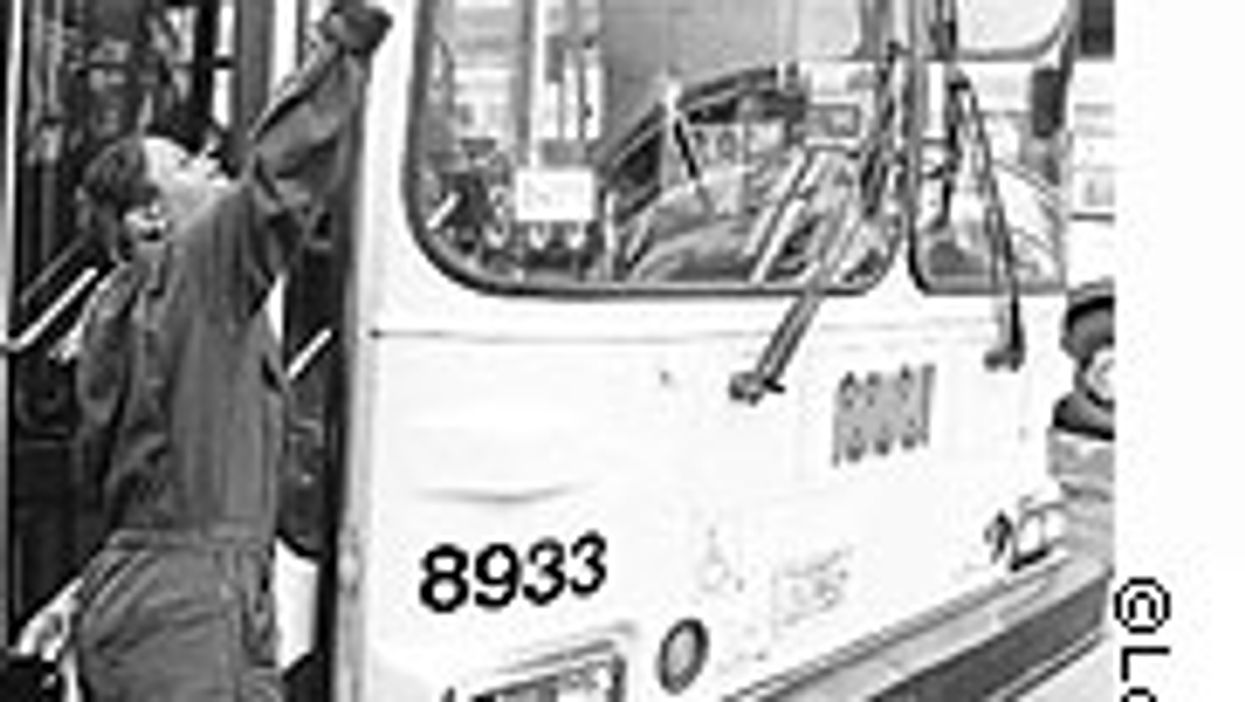 Her scrunched-up shoulders and urge to weep when she got to work told Christine Zook all she needed to know about her future as a bus driver.

Zook used to drive a bus for an urban transit district in Northern California. There was much about the job that she loved, especially the economic rewards -- decent pay, good family medical benefits, and a great pension. But after 10 years behind the wheel, Zook hit the wall. Squeezing a 20-ton machine through city streets rife with traffic jams, potholes, road construction, jaywalkers, bike messengers, double-parked trucks, and often heedless motorists had taken its toll. The job's day-to-day stresses on her body and nerves had built up over the years and emerged in clenched muscles and crying jags.

Urban bus driving is a good living, Zook reflected drily at a recent interview at her office in Oakland, California, but it may well lead to a short life. "The fact of the matter is, we die young," said Zook, now president of Amalgamated Transit Union Local 192. "The job kills you over time."

Fifty years of research throughout the world supports Zook's observation. Urban bus drivers experience higher than average rates of cardiovascular disease, according to the Journal of Occupational Health Psychology in 1998. "Epidemiological data from samples in several different countries consistently find urban bus drivers among the most unhealthy of occupational groups, particularly with respect to cardiovascular, gastrointestinal and musculoskeletal disorders," researchers reported. "Further, cardiovascular mortality rates are directly linked to years of service as a driver."

The report found that drivers are prone to increased blood pressure and higher levels of stress hormones -- factors that contribute to sickness and death from heart and blood vessel problems. Drivers are exposed to whole-body vibration, diesel exhaust, and noise while keeping themselves in a combat-like state of vigilance in order to deal with threatening passengers and crazy motorists. As if this weren't enough, bus drivers must adhere to a ruthless schedule of stops or risk being disciplined or fired.

Urban bus drivers have fewer serious accidents than, for example, long-haul truckers. But among public transit drivers, bus drivers suffer almost 63 percent of the reported injuries. In 2005, for example, of the 18, 131 injuries sustained by transit workers, almost 12,000 injuries were bus-related. And their health issues and work problems differ somewhat from tour, long-distance, and school bus drivers. But they are exposed with inordinate frequency to such crimes as sexual offenses, drunkenness, and vandalism according to American Public Transit Association statistics.

Because of all these pressures, they're also at greater risk of post-traumatic stress disorder than the population at large, a study of Montreal transit operators found. And yet bus operators are expected to be ready at all times with a smile for the customer, a quick memory for transit information for those who ask, and a helping hand for bicyclists and the disabled.

Add to that the sedentary nature of their jobs and the likelihood that, ruled by their schedules, they are apt not to eat the right foods, to drink enough water, or even to relieve themselves when they should. "There's no such thing as a bathroom break," Zook said.

"Even though you're on a bus with 40 people, you're extremely isolated," Zook said. "Depending on your personality or your ability to talk to new people, you may not have a conversation with another person all day."

A jumble of demands

Despite inroads by van pools and private bus lines, the US urban bus transit industry is a stable and growing business. The economic rewards that attracted Zook still draw recruits to the occupation, which is increasingly attractive to women and to minorities. But clearly, those rewards have a price.

"A lot of problems are created because of the juxtaposition of different demands on the drivers," says Cornell University researcher Gary Evans, a professor in the department of design and environmental analysis. Supervisors judge drivers primarily in terms of safety, on-time performance, and their relationship with passengers, he says, adding that bus drivers are in a vise. They think of themselves as professionals, he says, but they're evaluated primarily in terms of time -- no matter what kind of traffic they're facing.

German and Austrian researchers have reported that bus drivers' main troubles come from what they termed an "effort-reward imbalance" in the workplace. Lack of control contributes greatly to that imbalance and to the stress that results from it, Evans and co-researcher Gunn Johansson of Stockholm University reported in an article published in the Journal of Occupational Health.

"Drivers have very little decision latitude or discretion in how they carry out their jobs," they concluded. "Transit districts have hierarchical, top-down management styles with little or no employee input into the management or organization of work."

One measure of driver stress comes in the form of absenteeism. For many drivers, being absent from work is an escape from the stress of tight schedules and forced overtime. It is also a strategy to forestall the 10-year "burnout point," as Zook called it.

"In terms of the industry, [management] needs to be more open to the idea that the environment is part of the problem," Evans said. "I've approached numerous transit districts to see if we can change the environment. Generally, I get a stonewall. The main thing I would say to the industry is, don't take the monolithic view that the driver is the problem."

Still, transit districts here and there are experimenting with remedies through technological innovation and changes in work practices. A study on drivers in Sweden, for example, found that improved highway design, fewer bus stops, and electronic information displays substantially altered the effort-reward imbalance in drivers' favor and led to lower blood pressure.

At AC Transit, an urban transit district in the San Francisco Bay Area, drivers have had some influence over their schedules since 1997. They are learning to control their breathing and exhale deeply at stress-reduction classes, and are given tours of the Bay Area to emphasize their role in the region's transportation network. Drivers' seats have also been pushed back to accommodate the long-legged. And Zook is happy to report that, after countless banged knees, the company is now padding the fare boxes.

Meanwhile, in New York City, the Metropolitan Transit Authority now teaches would-be drivers how to navigate crowded city streets by using a 315-degree, 8-channel, 60-frame bus simulator. The new system has seen the 28 percent failure rate the MTA used to see among trainees drop to half that figure; drivers trained without the simulator cause 36 percent more accidents. As one reporter observed, in order to graduate, trainees have to race the simulated bus through the thicket of elevated train pillars present in the French Connection's chase scene, all while darting around traffic. And if that doesn't prepare a driver for chaotic city streets, what will?

Commercial Vehicle Insurance: Truckers Aren't the Only Ones Who Need It. MoneyGeek.com. https://www.moneygeek.com/insurance/auto/resources/car-insurance-commercial-drivers/