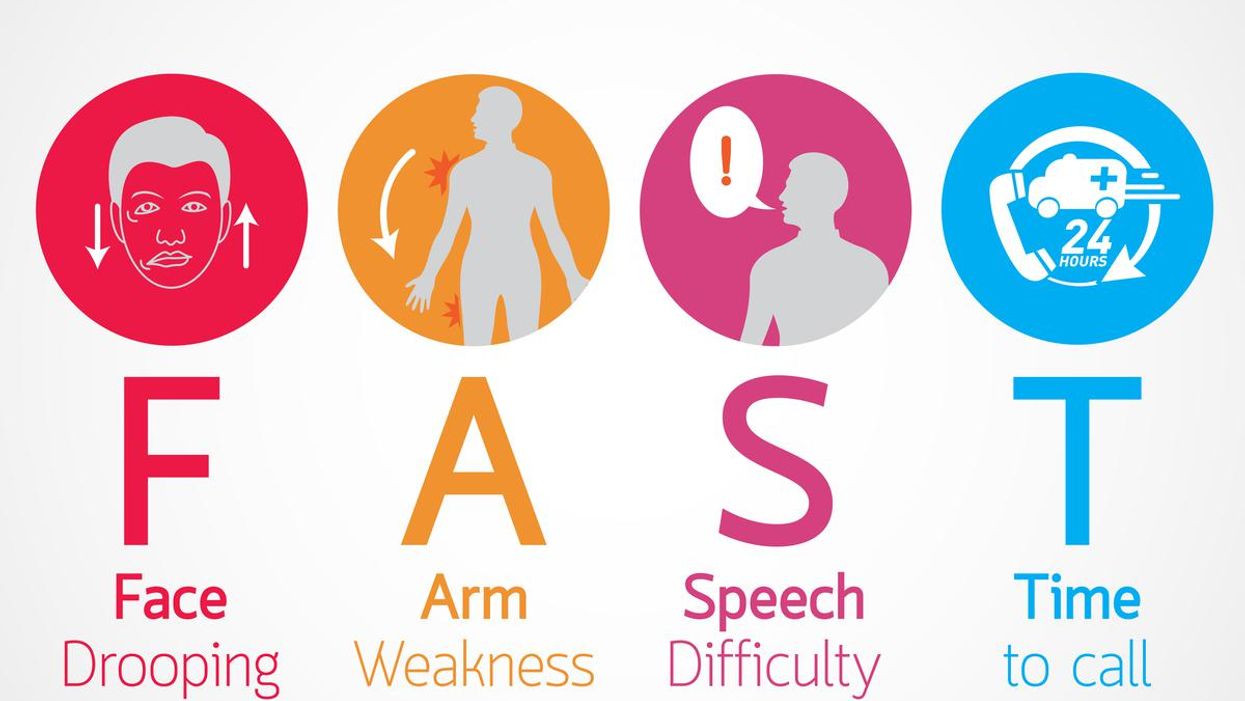 It happened so fast. Sharon Brooks, co-owner of the trendy but now-defunct Hamburger Mary's restaurant in San Francisco, was ringing out the cash register and trying to reach her son's girlfriend on the phone. But when the young woman answered, all that came out of Brooks' mouth was gibberish.

"I tried to talk and couldn't. I went into the bathroom and felt my left side tingling," says Brooks, who was only 51 when this happened. "I knew the signs of a stroke. But I looked at my pupils and they were equal." Then she went out front, sat down next to one of her employees and recovered her speech long enough to say, " 'Call 911. I think I'm having a stroke.'

"Then my left side went out," she says, "and I fell off the chair."

Clearly Brooks wasn't given much warning that a stroke was on the way. And, even when confronted with some classic symptoms, she was inclined not to believe it was really happening. But all of us should learn to recognize and heed the harbingers of a stroke. Every minute counts when blood flow to the brain is interrupted. The most common kind of stroke can be treated with a clot-dissolving drug, but treatment must start within three hours to be most effective.

If my loved one appears to be in trouble, how do I know if he or she is having a stroke?

The Stroke Association uses the acronyms F-A-S-T and 9-1-1:

I'm feeling dizzy. What are the warning signs of a stroke?

Here are the key warning signs, according to the American Stroke Association:

What should I do if I experience these symptoms?

Even if the symptoms last only a few minutes, call 911 immediately -- a stroke is a medical emergency. Have someone else call an ambulance if necessary, or rush you to the emergency room. (If you're unable to speak and are alone, many emergency response dispatchers have address identification; just push 911 and keep the line open.)

What should I do after calling 911?

Because a loss of feeling in your legs may make you fall, you should sit down in a comfortable place. If you're with someone who may be having a stroke, quickly assemble his medications and medical records to bring along with you to the hospital.

Other conditions resemble stroke, such as low blood sugar in people with diabetes. If you have diabetes, follow your doctor's previous instructions on how to raise low blood sugar. The American Diabetes Association suggests you eat or drink 15 grams of carbohydrate to raise your blood sugar, such as half a cup of fruit juice, 5 to 6 pieces of hard candy, or 3 glucose tablets. "Low blood sugar could mimic a stroke, and it wouldn't be a good idea to let time go by if the body's not getting the sugar it needs," says Andy Jagoda, MD, a professor at the department of emergency medicine at the Icahn School of Medicine at Mount Sinai and a member of the National Institutes of Health's Brain Attack Coalition.

What will happen when the ambulance comes?

You should be in good hands. On the way to the hospital, paramedics will check your vital signs and learn what they can about your medical history and the medications you're taking. They'll make sure your airway is clear, check your breathing and listen to your lungs and heart, take your blood pressure and give you oxygen. You'll also likely be attached to a heart monitor, and have your finger pricked for a blood test.

Paramedics may also perform a basic neurological exam to check for signs of stroke, such as difficulty with speech or weakness in the arms or legs. Whether they ask or not, you should tell them the time that the symptoms began and to communicate that time to the physicians at the hospital. This is critical, since some treatments are effective only if administered within a certain time period.

What if it turns out that I don't have a stroke?

You may have what's popularly called a "mini-stroke," known as a transient ischemic attack (TIA). These mini-strokes occur when there's a brief blockage or slowing of blood flow to an area of the brain; they produce the same symptoms as stroke, but don't cause lasting harm. However, TIAs are usually a warning that there's an area of vulnerability in an artery, such as narrowing or partial closure. In addition, mini-strokes usually precede a stroke that causes permanent damage -- up to 30 percent of ischemic strokes occur within a month of a TIA. Detecting and treating the TIA early could help prevent permanent damage from a stroke in the future.

Another important reason for taking such symptoms seriously is that they may also be a warning sign of an impending rupture of an artery or hemorrhagic stroke. Before the artery bursts, you may experience a sudden unexplained pounding headache, loss of speech or other stroke symptoms as a result of a small amount of bleeding from the weakened area. If you know the symptoms of a stroke, you're much more likely to get to a doctor who can locate the weakened blood vessels and correct them before the artery ruptures.

National Institute of Neurological Disorders and Stroke http://www.ninds.nih.gov The country's leading supporter of biomedical research on disorders of the brain and nervous system, NINDS has the latest news on stroke research.

Signs and Symptoms of a Stroke. American Heart Association.

National Institute of Neurological Disorders and Stroke. What You Need to Know About a Stroke. http://www.ninds.nih.gov/disorders/stroke/stroke_needtoknow.htm