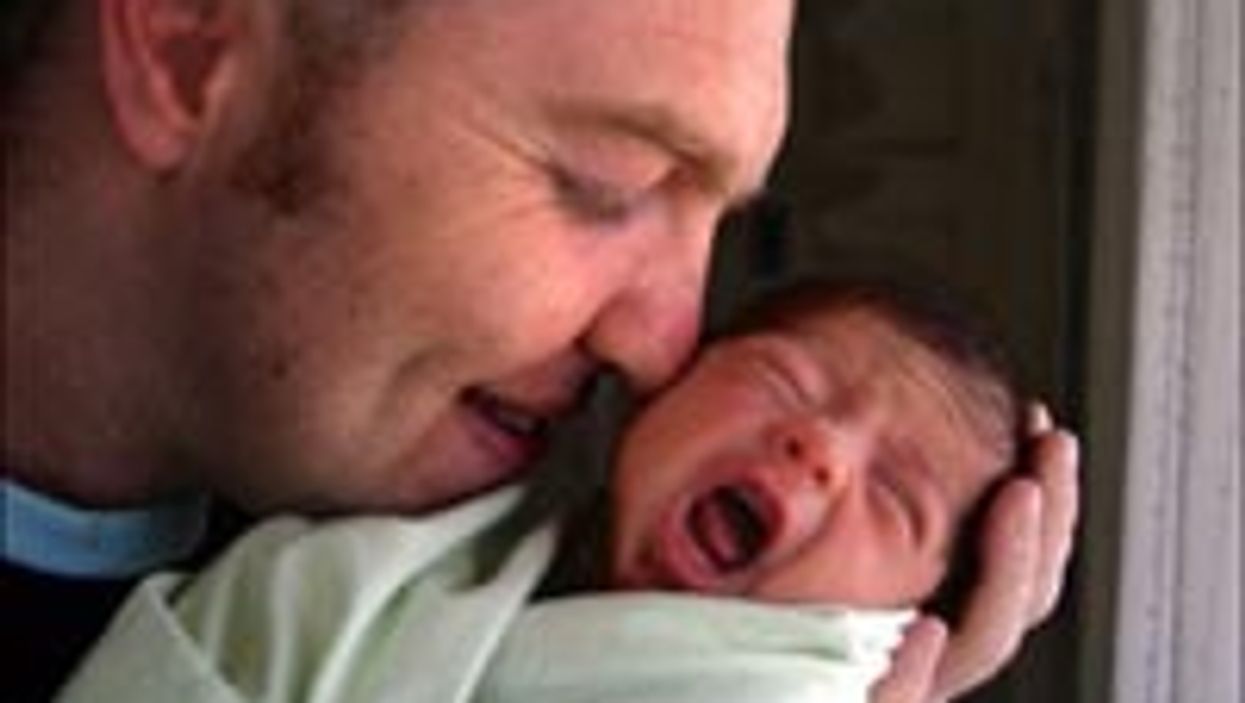 Some dads do a great job from day one. They're loving, supportive, and attentive. They change a diaper in seconds flat, bank it into the pail from 20 feet, and kiss the baby who made the assist.

More likely, though, new dads are scared. They're afraid they'll do everything wrong. They'll pale at changing her diapers, they'll mess up her feeding, and they'll fumble when they hold her.

But good parenting isn't instinctive -- any more for women than for men. It's something you have to learn. Some prepare for it by reading or taking classes with their partners, while others learn on the job. But more than 150,000 have decided to take a different approach. Instead of heading blindly into fatherhood, they signed up for Boot Camp.

Boot Camp for New Dads is a nationwide program that gives soon-to-be dads the skills -- and, just as important, the confidence -- to get the job done right. At hospitals, family resource centers, and, appropriately enough, military bases, expectant "rookie" dads spend two to four hours learning the ropes from "veterans." (For a list of Boot Camp locations, see http://www.bootcampfornewdads.org/locations.php.) The veterans bring their babies to the sessions, proving that it really is possible to take care of a baby without mom nearby.

Too many people have low expectations for dads, says Chuck Ault, advisory board member and former national training director for the program. And many men secretly suspect that they don't have what it takes to raise a kid. Unfortunately, the people around them -- including their wives -- may share that opinion. "Women are brought up to believe that this is women's territory," he says. "They just assume they'll be better at it."

When a nervous dad gets that first glare from his wife, condescending remark from his mother-in-law, or chiding from the guys, he just might quit trying, Ault says. That's why the Boot Camp has one goal above all others: If nothing else, Ault wants every rookie to leave the class a little more confident than he was when he came in.

Many men who sign up for Boot Camp have never been within drooling distance of a baby, he says. In the course of a class, they get to see the whole cycle of what a baby needs, from how to support his head to what to do when he won't stop crying. They have a chance to hold the babies and, if they're bold, change a diaper. And nobody keels over.

One hot July day, four rookies, two veterans, and a "facilitator" (a gentler term than "drill instructor") gathered in a meeting room at Saint Vincent's Hospital in Billings, Montana. Mike Atkinson, owner of a Billings construction company, started the discussion with a confession: In 32 years, he'd never held a baby or changed a diaper.

Atkinson's daughter was due in just a few weeks, and he knew he had a long way to go before he was ready. "This is a whole new ball game for me," he said. "The more info I can get, the better dad I'm going to be."

Like the other rookies, Atkinson had many questions about sleeping, feeding, and baby equipment. But most of all, he was just trying to get himself in the right frame of mind. "We don't have anything growing inside of us," he said. "The fatherly instinct has to be mental, not physical."

More than one way

In contrast to its military namesake, nobody at new dad Boot Camp is really in charge. The facilitator has a checklist of topics to cover, but the dads and dads-to-be lead most of the discussion.

In Billings, the class was guided by Larry McGrail, RN, a father and former pediatric nurse. McGrail could talk for hours about babies, but he never turned the Boot Camp into a lecture. Even when controversial topics came up -- babies sleeping in parents' beds vs. cribs, for example -- he didn't take a stand. In short, the men learned that there's more than one way to raise a baby.

Of course, there are some aspects of child rearing that are not negotiable. Dads learned that they MUST buy a quality car seat and learn how to install it properly. They learned that babies should never be left unattended in a tub, a car, or on a changing table. And at the very end of session, they got a dramatic reminder that babies should never be shaken. The facilitator put an egg in a small Tupperware container -- a rough model of a young brain inside a skull. With just a few shakes, the container was full of goo. The faces around the room showed that everybody got the message.

Naturally, dads walk away from Boot Camp with new enthusiasm and determination. And the attitude doesn't go away when the baby is born, Ault says. He has just finished surveying the men who have gone through his program in Denver over the last five years. "Years later, they're able to look back and see that they had the tools to do a good job," he says. "They realize that their relationships [with their children] are different from their neighbors who didn't go through boot camp."

Atkinson, for one, can't wait to get started. He still has to put up sheetrock in the baby's room and find a good crib and a hundred other things. But he feels ready for fatherhood, and that's the most important step of all.