The Hazards of Herbal Cigarettes 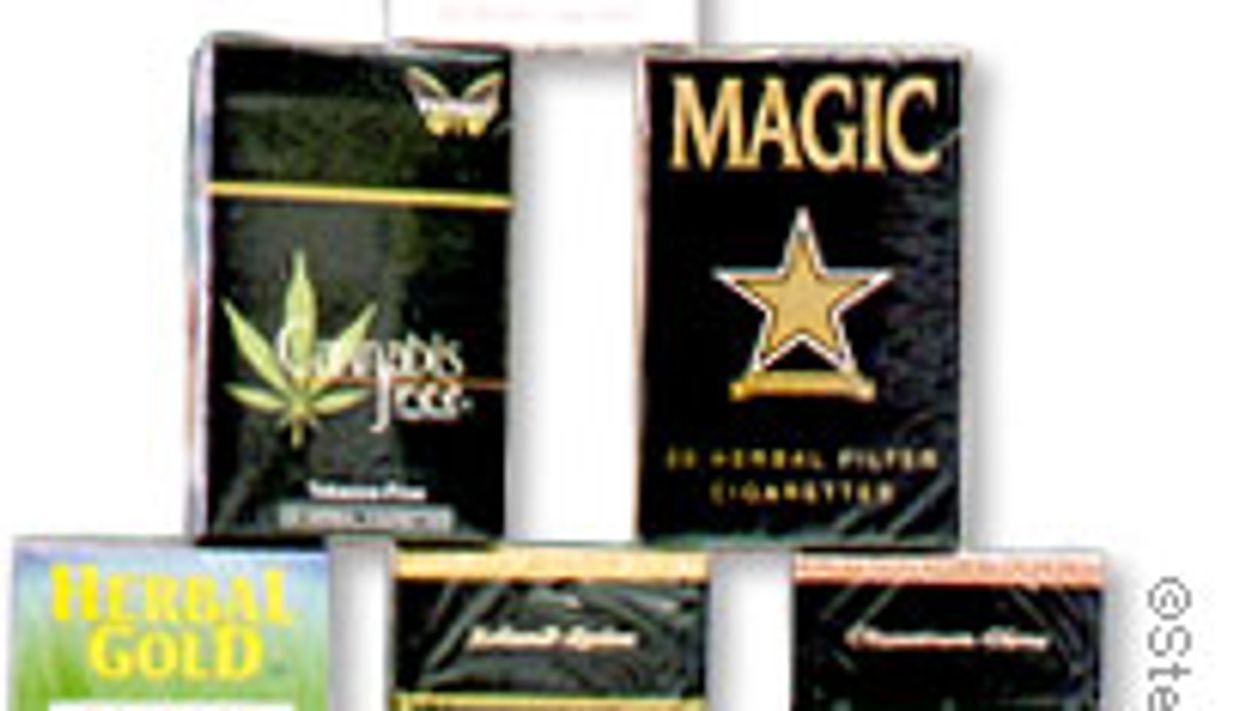 What do corn silk, banana skins, and weeds have in common? People desperate for a smoke have used them all in improvised cigarettes.

If something can be rolled up and smoked, you can bet somebody, somewhere, has rolled it up and smoked it. Most of these experiments don't get very far, but a few non-tobacco substances have managed to catch on. In fact, "alternative" cigarettes have become a booming business. Some contain mixtures of herbs; some combine tobacco with cloves, dried tendu leaves (a plant from India and Southeast Asia), and other unusual ingredients.

Alternative cigarettes -- sold at many convenience stores and over the Internet -- are easy to find and easy to buy, even for kids who aren't old enough to buy tobacco. They often look exotic and come in appealing flavors such as cherry or vanilla. But their biggest selling point is that they're supposed to be a healthy alternative to "real" cigarettes. As one online merchant of natural tobacco and clove cigarettes put it, "Gotta smoke? Smoke smart!"

But despite this marketing ploy, alternative cigarettes are NOT safe. In fact, some are considerably more dangerous than normal cigarettes. As the director of the Federal Trade Commission's Bureau of Consumer Affairs once stated, "There's no such thing as a safe smoke."

"Simply being free of additives -- or in the case of herbal cigarettes, free of nicotine -- doesn't make them safer," says Matthew Gold, a staff attorney for the FTC. "Any kind of cigarette you smoke has tar and carbon monoxide, which have very real health hazards associated with them." Gold won a case against Alternative Cigarettes, Inc. that forced the company to display health warnings on its products.

Among the most popular types of alternative cigarettes are bidi, herbal, and clove cigarettes, all of which are especially popular with young people. Here's a close-up look at their risks:

Usually imported from India and Southeast Asia, bidis are small, hand-rolled cigarettes made with dark tobacco wrapped tightly in a dried tendu leaf. They look somewhat like marijuana joints and are available in just about every artificial flavor imaginable, including root beer, mango, chocolate, and cherry. Bidis are usually much less expensive than regular cigarettes; a bundle of 20 may cost just $2.00. Why so cheap? According to the U.S. Customs Service, some manufacturers rely on child slave laborers to roll the cigarettes.

Exotic look, candy-like flavors, low cost -- it's not hard to guess whom bidis are really trying to attract. "We call them training wheels for young smokers," says John Banzhaf, executive director of Action on Smoking and Health (ASH). A 1999 study of Boston-area high school students, conducted by the Centers for Disease Control and Prevention, found that 40 percent had tried bidis and 16 percent smoked them regularly. A nationwide survey conducted by the CDC in 2004 found that 2.4 percent of middle school students and 2.7 percent of high school students smoked bidis.

Unfortunately, these pleasant-tasting "herbal" cigarettes are more dangerous than tobacco cigarettes. For one thing, smokers inhale about 2 to 3 times more tar and nicotine than they would if they smoked regular cigarettes, according to the March 2000 issue of Public Health. And since tendu leaves don't burn as easily as paper, bidi smokers have to inhale deeply and often just to keep the things lit. As a result, toxins and cancer-causing compounds found in the smoke may end up deep in their lungs. Yet in a survey of bidis sold in San Francisco, conducted by the SF Tobacco Free Project, 67 percent of the bidi packets lacked a required health warning.

Jennifer Williams, the American Lung Association's former director of tobacco control for the central California coast, says that high schoolers are often shocked to learn how bidis are made. "When we go into schools and talk, we let the kids know that many bidis are produced with illegal child labor," says Williams. "In fact, kids their own age are often indentured servants, spending the entire day rolling hundreds of these cigarettes for little or no money. This has a big effect on the kids. They're upset that kids are abused in order to produce this product."

Another unsavory bit of information that Williams shares: "The tobacco used for bidis is often stored in large, rat-infested warehouses, and the tobacco doesn't get cleaned. Basically, it's full of rodent feces and who knows what else."

Bidis are still widely available in many parts of the nation, but a crackdown has begun. Several states -- including Illinois, Vermont and West Virginia -- completely ban the sale of bidis. State attorneys general have called for a ban on the imported cigarettes, pointing out that online sellers of bidis do nothing to verify whether the purchasers are minors. In one state-run sting operation, children as young as 9 successfully purchased bidis over the telephone using a toll-free number provided by a Web site.

Herbal cigarettes are tobacco-free and nicotine-free, but they are far from risk-free. "Many people assume that anything herbal or natural isn't dangerous, and that's not true," Banzhaf says.

Herbal Gold cigarettes are a prime example. They look exactly like regular cigarettes and come in different flavors including menthol, cherry, and vanilla. Because they don't contain tobacco, they can be sold legally to smokers of any age. Herbal Gold cigarettes contain a blend of herbs including marshmallow (the plant, not the hot chocolate topping), passion flower, jasmine, and ginseng. These herbs are staples of health-food stores, and they're generally safe -- until they're set on fire.

According to a report by the Federal Trade Commission (FTC), Herbal Gold and other herbal cigarettes produce many of the same toxins found in tobacco smoke, including tar and carbon monoxide. In April 2000, the commission ordered the makers of Herbal Gold (as well as another herbal cigarette manufacturer) to add the following warning to all packages: "Herbal cigarettes are dangerous to your health. They produce tar and carbon monoxide." Another FTC complaint against Alternative Cigarettes and Santa Fe Natural Tobacco Company -- the makers of "Natural American Spirit" cigarettes -- ended with the manufacturers agreeing to discontinue advertising claims that their cigarettes were safer because they contained no additives.

Also known as kreteks, these cigarettes contain about 60 percent tobacco and 40 percent ground cloves. (Some baby boomers may remember buying them in exotic packages with a picture of a volcano on the front.) Far from being healthier to smoke, kreteks deliver twice as much nicotine, tar, and carbon monoxide as regular cigarettes, according to the American Lung Association.

In addition, switching tobacco for cloves isn't necessarily a good trade. Cloves may be perfectly fine in a cup of cider or a Christmas ham, but they produce dangerous chemicals when they burn, Banzhaf says. Inhaled clove oil may also raise the risk of pneumonia, bronchitis, and other lung infections. In a few susceptible individuals, clove cigarettes have even caused coma and life-threatening lung injury, including pulmonary edema, a condition in which the lungs fill up with fluid.