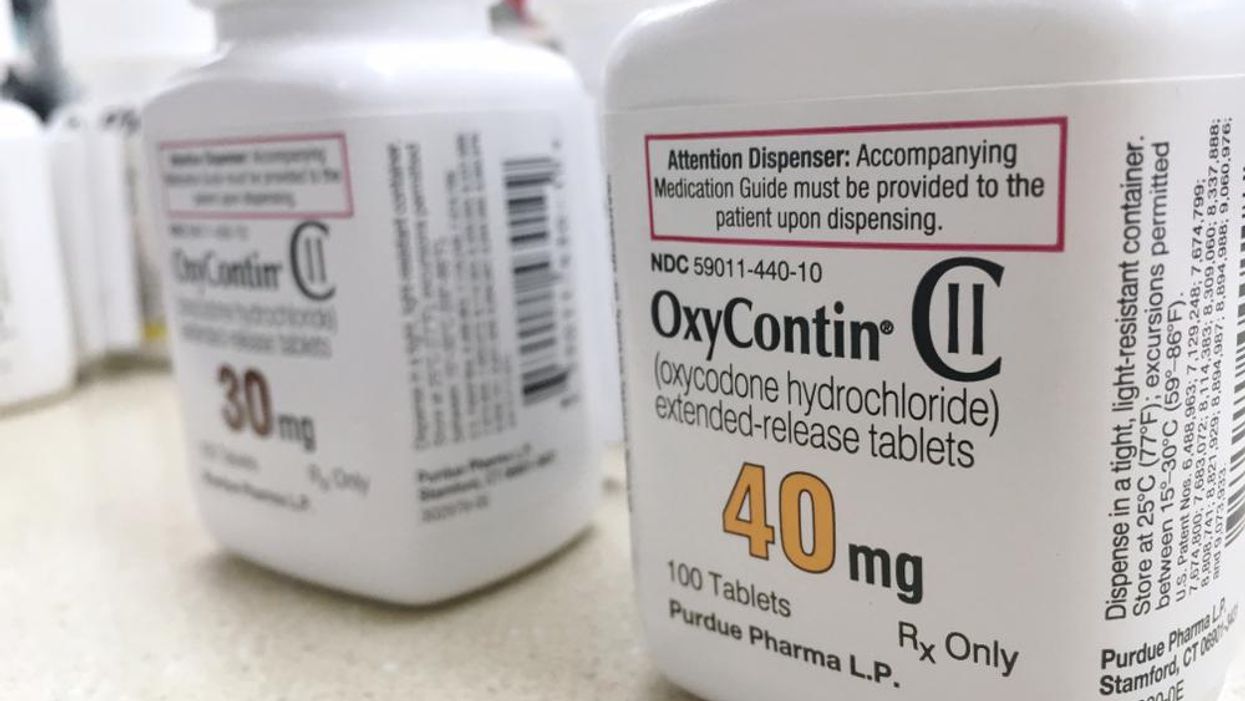 Thanks to the tribulations of Rush Limbaugh and a cover story in The New York Times Magazine, just about everyone has heard of OxyContin addiction. Naturally, some patients with prescriptions for the pain reliever are worried that they, too, will get hooked.

OxyContin is one of many opioids that are used for chronic pain management. When taken properly, these opioids are very effective and very safe.

But all are also potentially dangerous and addictive. According to the Drug Enforcement Agency (DEA), doctors wrote 7.6 million prescriptions for OxyContin in and similar controlled-release products in 2006. The more any of these drugs gets prescribed, the more potential for risks there are, and when one drug becomes popularly prescribed by physicians, the more popular it becomes on the street, simply because it is more available.

Introduced in the United States in 1995, OxyContin (generic name: oxycodone) is a narcotic prescription medication designed to provide relief for chronic pain. It belongs to the group of painkillers known as opioids, which are derived from the opium poppy. Other examples are morphine, codeine, and heroin. Oxycontin contains oxycodone which, like all opiods, blocks pain receptors in the brain. Oxycodone is also the active ingredient in other common pain relievers like Percodan and Percocet. Each OxyContin pill is designed to release the drug slowly over a 12-hour period, so taking two tablets each day can provide continuous relief for chronic pain.

According to Dr. Amanda Gruber, associate chief of substance abuse in the biological psychiatry laboratory of the Harvard-affiliated McLean Hospital, secondary effects of OxyContin can include respiratory depression, drowsiness, reduced anxiety, increased feelings of relaxation, and euphoria. People who take OxyContin as prescribed eventually develop a tolerance to these effects -- but not to the pain relief effect. So these side effects will drop away, while the pain relief continues to be effective. Another common side effect is constipation, which can usually be managed with stool softeners and other medications.

Why do doctors prescribe OxyContin?

Doctors prescribe OxyContin to treat moderate to severe chronic pain, especially when other treatments are not effective. The pain can have a variety of causes, such as cancer and injury. According to the Food and Drug Administration, doctors shouldn't give the drug (or long-acting opioids in general) to people who have mild pain, temporary pain (such as pain from a surgery), or pain that comes and goes.

How addictive is OxyContin?

When taken as directed, OxyContin is not especially addictive.

People who take OxyContin every day, as prescribed, may become physically dependent on the drug, and may suffer withdrawal symptoms if they suddenly stop taking their pills. Withdrawal symptoms include restlessness, muscle and bone pain, insomnia, diarrhea, vomiting, cold flashes, and involuntary leg movements.

Dependence isn't the same as addiction. You can become physically dependent on many types of medications, including blood pressure medications and antidepressants. But people with an addiction have an irresistible urge to seek out and take their drugs regardless of the consequences. Doctors can help patients break their dependency by slowly reducing the dose when OxyContin is no longer needed for pain relief. Fear of physical dependence is no reason to avoid taking OxyContin if it is part of a necessary medical regimen, but individuals who have had a past or current history of substance abuse should take them under close supervision by a doctor.

Why is OxyContin abused?

According to a DEA statement before the U.S. House of Representatives, inappropriate use of OxyContin became a concern in 2000, and by 2001 it had reached "levels of abuse never before seen. DEA has never witnessed such a rapid increase in the abuse and diversion of a pharmaceutical drug product."

Why such an explosion in abuse of OxyContin and not of similar drugs like Percocet and Percodan? It produces a more profound high. According to the FDA, OxyContin's unique "controlled-release formulation" means each tablet contains more oxycodone than these other drugs. Ironically, it was this very makeup that led officials to believe OxyContin would have less potential for abuse. If taken as directed, it does.

But recreational users have discovered that the tablets can be crushed and then injected or snorted, quickly turning this safe medication into a highly addictive drug. When crushed into powder and snorted, swallowed, or injected, the user receives the entire dose instantly, rather than a slow release stretched out over 12 hours. Abused in this manner, OxyContin acts more like a street drug than a pain reliever, delivering a euphoric, heroin-like high.

Once addicted, users may start shopping around for doctors who will write OxyContin prescriptions without thoroughly checking their medical histories. They may search out the drug on the streets, and may even raid medicine cabinets or steal OxyContin from pharmacies.

How dangerous is OxyContin abuse and addiction?

Recreational users may think OxyContin is "safe" because it is a prescription drug. But anyone who breaks up the tablets runs a serious risk of overdose. After all, the tablets are designed to release the drug over 12 hours, not all at once. According to the National Institute on Drug Abuse, taking a dose in one sitting can cause fatal respiratory depression. In 2000, over 10,000 people were treated in emergency rooms for "drug abuse episodes" involving drugs containing oxycodone (including OxyContin, Percodan, and Percocet). By 2007, the number had jumped to over 42,800.

How is OxyContin addiction treated?

Doctors may prescribe medications in order to relieve withdrawal symptoms, counteract the effects of OxyContin, and help lessen cravings. Methadone and LAAM (levo-alpha-acetyl-methadol) are both commonly used to manage OxyContin addiction. In October 2002, the FDA approved the use of buprenorphine, a partial opiate agonist, for limited use in managing opioid addiction. Since its release, prescriptions have increased from 48,000 in 2003 to 1.9 million in 2007. Treatment with such aids is often combined with behavioral counseling.

However, Dr. Amanda Gruber, associate chief of substance abuse in the biological psychiatry laboratory of the Harvard-affiliated McLean Hospital, emphasizes that methadone and LAAM programs are usually not the first line of action in treating prescription opioid addiction. These approaches were designed primarily to prevent street users of heroin from resorting to crime to support their habit. These maintenance programs are not ideal because they result in low-level dependence on a "replacement" opiate for as long as the user remains in the program.

Instead, she says that most people addicted to OxyContin are better tapering off the drug with the supervision of a medical professional, and battling through the withdrawal until they are completely opioid-free. Then, she says, doctors will often prescribe naloxone hydrocholoride, a drug that blocks the drugs effects. That way, patients are less likely to fall back into addiction if they happen to slip up and abuse OxyContin again.

How can I take OxyContin safely?

If you have severe chronic pain, don't hesitate to try OxyContin or another effective narcotic if your doctor prescribes it after a thorough evaluation of the pros and cons. But be sure to tell your doctor about any other medicines, herbs, or supplements you're taking, to avoid the possibility of dangerous interactions. Seek medical attention for symptoms of an allergic reaction such as a rash, itching, swelling, dizziness, or trouble breathing.

When you get your prescription, follow it to the letter -- and promptly ask your pharmacist or doctor if you have questions. Never chew or break up the pills, never give your pills to anyone else, and be careful not to take more pills than your doctor advises. In the event of an overdose, contact a poison control center or emergency room immediately. Possible symptoms of overdose include cold and clammy skin, low body temperature, slowed breathing, slowed heartbeat, drowsiness, dizziness, lightheadedness, deep sleep, and loss of consciousness.

If you find you are still having pain after taking your medication, talk to your doctor -- never adjust the dosage of a powerful drug like OxyContin on your own. You shouldn't drink alcohol of any kind while taking OxyContin. According to Gruber, doctors also often advise you to avoid activities that require you to be alert, such as driving a car or operating machinery -- at least when you've just begun taking the drug. But eventually, she says, most people adjust to side effects and are able to perform all their usual tasks.

If you think you no longer need the medication for pain relief, ask your doctor to help you with a plan to gradually taper off the drug so you won't feel sick or suffer withdrawal symptoms. Once you've stopped taking OxyContin, flush any leftover pills down the toilet.

Interview with Dr. Amanda Gruber, associate chief of substance abuse in the biological psychiatry laboratory of the Harvard-affiliated McLean Hospital