Flight attendants are tired of being the target of unruly passengers' 'air rage.' They're fighting back. 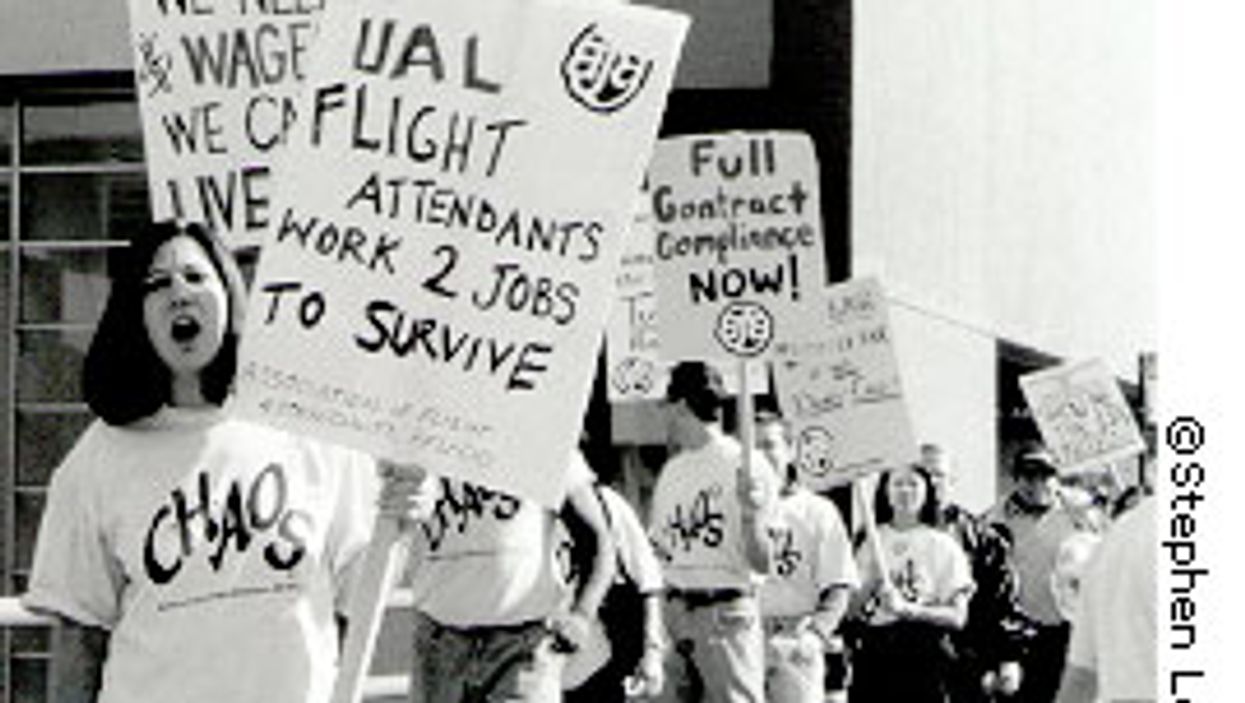 On a chartered flight from Cleveland to Las Vegas one July, flight attendants smelled smoke coming from one of the lavatories. Head flight attendant Robert Craig informed the woman who emerged from the lavatory that smoking on an aircraft is a federal offense; her response was a sneering, "Yeah, whatever." Craig then found cigarette butts scattered on the bathroom floor and discovered that the smoke detector had been tampered with. He called the police to have the woman arrested when the plane touched down in Las Vegas.

Upon arrival, the woman's mild-mannered companion accompanied the two to the front of the plane, where the officers were waiting for the smoker.

"Sir, could you step aside for a moment?" Craig asked the man as they reached the door. It was then that the quiet passenger suddenly went berserk. Spouting obscenities, he punched Craig in the face and slammed him against the cockpit door. "That was so unnecessary," says Craig, who suffered a pulled neck and a concussion from the assault. "It was just another example of how people are becoming out of control."

In-flight assaults and verbal abuse -- commonly known as "air rage" -- first received national attention when a crazed passenger broke into the cockpit of an Alaska Airlines jetliner bound for San Francisco and lunged for the controls before being subdued by the copilot, crew members, and other passengers. Although more terrifying than most attacks, the assault is among the untold number of air rage incidents reported in the past few years -- and the phenomenon appears to be on the rise.

It was apparently air rage that pushed 20-year veteran flight attendant Steven Slater over the edge. The JetBlue attendant had asked a passenger fiddling with her carry-on luggage to sit down. She refused, and to make matters worse, Slater was accidentally struck by the falling luggage. Rather than apologizing, the woman reportedly swore at him. Slater snapped. When the plane touched down in New York City, he cursed at the unruly passenger over the intercom, announced he was quitting his job, then activated the emergency chute and slid to freedom -- at least until he was arrested later that day.

Slater was able to avoid jail time by pleading guilty to second-degree criminal mischief and lesser charges in a plea bargain that requires him to undergo counseling and treatment for a year. He has his detractors in the airline industry and elsewhere, but he has also become a folk hero. More than 160,000 people have friended him on Facebook, and at least one volunteered to pay for his legal defense. His dramatic exit seemed to strike a chord among fed-up employees around the world, especially flight attendants.

"Slater is our icon. He has done what I could only think of. We have been discussing this since morning. We all have our lists of horrible passenger incidents," a 24-year-old flight attendant told the Times of India. "What no one spoke about is the attitude of airlines to flight attendants' problems in dealing with passengers. It's never addressed. We are asked to turn a blind eye.....I'm sure he snapped after being tired of taking it quietly all this while."

Another 17-year cabin crew veteran commented on the caregiver stress Slater had dealt with. "I read that he had nursed his dying father and was now doing the same for his mother. People do not realize that some of the flight attendants come to work leaving behind difficult circumstances. I had to do a flight just two days after my father died."

The Association of Flight Attendants-Commuication Workers of America (AFA-CWA) and the Federal Aviation Administration (FAA) have recorded hundreds of cases of abusive or disruptive passenger behavior on the major airlines each year over the past 15 years. A survey by OAG Business Travel found that 40 percent of business fliers polled said they had witnessed some form of verbal or physical abuse on flights.

Unlike most American workers, flight attendants are not yet under under the full protection of the Occupational Safety and Health Administration (OSHA) -- a fact that airline employees blame in part for the rise in cases of air rage and other safety problems.

"Not only are there no federal safety standards governing these kind of in-flight assaults, we have no industry-wide training or backup in dealing with them," says AFA-CWA member Robert Craig. The FAA has had jurisdiction over the safety of airline employees since 1975, but the AFA-CWA has long called for airline employees to be granted the same federal health and safety protections enjoyed by other workers.

OSHA and the FAA signed an agreement in 2000 to improve working conditions for flight attendants. Three years later, the FAA announced the creation of a voluntary program in which airlines specify which OSHA protections they would provide. The AFA-CWA rejected this voluntary approach and sued the FAA in 2005, seeking to require OSHA regulation of the industry. The union lost their suit and their appeal.

Some flight attendants have also taken action on their own. Rennee Sheffer, a flight attendant from Charlotte, North Carolina, founded the now-defunct Skyrage Foundation with her husband after being attacked by a male passenger on US Airways -- an assault that caused her to suffer internal bleeding and require knee surgery. The foundation tracked international news reports of in-flight assaults and lobbied for better enforcement of existing safety regulations.

The roots of air rage

Deregulation may well have contributed to the rise in in-flight abuse. Patricia Friend, former international president of the AFA-CWA, has said that cramped planes and frustrating delays, together with airlines' liberal alcohol policies and a society-wide decline in civility, make an explosive combination. "The reality of the crowded airplane and the reductions of in-flight service's amenities offered is completely the opposite of the advertising the airlines do, in which they advertise this wonderful, marvelous experience. You fail to meet people's expectations."

Some airlines have reacted to the AFA-CWA's concerns by eliminating a number of seats so passengers will be less crowded and less tense. The AFA-CWA has issued advisories to the airlines recommending that they cap the number of drinks served to a single passenger and establish training programs on ways to deal with unruly passengers. The recommendations are not mandatory, however, and the flight attendants are still often left to fend for themselves in pacifying passengers or protecting themselves from an outright attack.

Air rage is only one of numerous hazards -- including hijackings and terrorism -- that flight attendants face on the job. As a result of lobbying by the AFA-CWA and new FAA regulations, airlines have improved working conditions over the years. Cigarette smoking has been banned on all domestic and most international flights, and there are no longer onerous weight or age restrictions for attendants. But flight attendants' health is threatened by such problems as heavy bags that fall out of overhead bins, unwieldy serving carts, cosmic radiation, sleep deprivation, accidents caused by turbulence, noise-related hearing loss, exposure to infectious diseases such as tuberculosis, and cabin air contaminated by carbon monoxide and other toxins.

"Not enough outside air is being introduced into the cabin," says AFA-CWA researcher Judith (Anderson) Murawski. "We get so many complaints, anecdotal reports of employees with headaches, dizziness, and dry skin."

Les Dorr, an FAA spokesperson, says flight attendants have been given an open forum to present their concerns. Meanwhile, the AFA-CWA plans to monitor the OSHA and the FAA to ensure that they heed their promise to protect attendants. "Flight attendants who report to work fit and healthy are going home sick, unable to carry out their normal activities," said one AFA-CWA representative. "And that's not right. We need the same federal protections as other workers."