For many veterinarians, cat scratches and poodle bites are part of the job. Farm vet Jim Reynolds wishes he had it that easy. 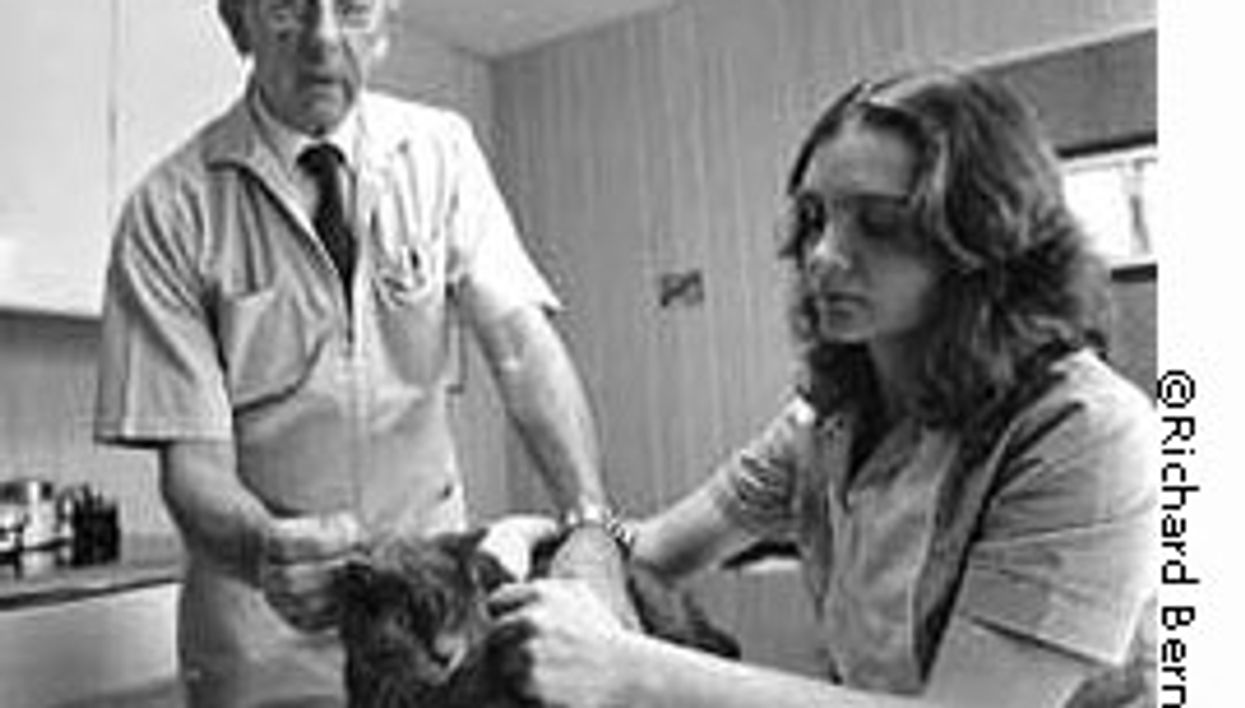 It's no mystery why so many people are drawn to the field of veterinary medicine, but some of them are in for a rude surprise. "People come to this profession because they love animals and want to be around animals," says Edward Jorden, DVM, a veterinarian in Billings, Montana. "Then they discover that half the animals want to bite them. It's not such a snuggly, cuddly relationship."

And when a person handles enough sick, scared pets, bites are inevitable. "There's not a small-animal veterinarian in the country who hasn't been bitten," Jorden says. Early in his career, Jorden lost the tip of his finger to a 15-pound mutt, and two years ago, a surprisingly quick German shepherd sank its canines into his arm.

Big-animal veterinarians like Jim Reynolds, DVM, don't get chomped very often, but they have other hazards to contend with. As a vet on a dairy farm, Reynolds spent much of his time sticking his arm into cows' rectums (it's the quickest way to tell if a cow is pregnant). On large farms, he examined as many as 600 cows a day, a routine that put a huge strain on his shoulder. "Their anuses are very tight, so it takes some force to get in there," he says. "And once you're in, your forearm is basically immobile. You have to rely on your hand and shoulder."

Reynolds's shoulder gave out completely while working on a farm where many of the cows were unrestrained. Not surprisingly, they didn't always stand still for the examination. After several cows tried to walk away with his arm, the tendons in his shoulder began to buckle. Reynolds had to undergo surgery and give up his practice; he's now an instructor with the University of California at Davis.

Whether the patients are Chihuahuas or cows, veterinary medicine can be a dangerous business. A survey of more than 2,000 California veterinarians conducted by researchers at the University of California at Davis found that 13 percent had suffered a serious injury that forced them to miss at least one week of work.

And that's not all. A full 62 percent of the veterinarians had some form of nasal allergy or conjunctivitis. A quarter of them had developed repetitive stress injuries, 45 percent had some type of skin irritation, and nearly 40 percent had picked up an animal-borne infection.

Of course, many of these problems could have been avoided. Almost 40 percent of vets who had been seriously hurt chalked up the incident to either haste, a lack of proper caution, or failure to use animal restraints. Many others blamed stress, fatigue, equipment failure, or a lack of competent help.

Avoiding a "hoof print in the head"

In his 20-plus years of practice, Jorden has managed to dramatically reduce the number of bites, scratches, and other injuries he suffers. He can now sense which animals are likely to attack him, and he makes sure they're restrained with a muzzle or given a sedative before he or his assistants get within striking range.

Animal restraints are perhaps even more important for large-animal veterinarians. "I wouldn't have had any trouble if I hadn't been silly and examined all of those cows in free stalls," Reynolds says. Some of his colleagues have learned similar lessons after free-moving cows kicked them in the knees. "Luckily, I got out of big-animal medicine before I got a hoof print in my head," Jorden says.

The veterinarians responding to the U.C. Davis survey reported many other tried-and-true safety measures. They said using "caution and insight" when handling animals was the most effective way to prevent injuries, followed by training assistants thoroughly, avoiding haste, getting plenty of rest, establishing ergonomic work conditions, and using protective gear such as gloves, lab coats, and eyewear.

The safer way to serve

The occupational hazards facing veterinarians remain fairly constant, even though some work-related issues, such as the rise in pet obesity, are relatively new. Zoonotic -- or animal-borne -- diseases are an ongoing concern in small animal veterinary practice, although they are often overlooked, according to the Canadian Veterinary Journal. Such diseases include cat scratch disease (bartonellosis), cat bite abscesses, rabies, leptospirosis, methicillin-resistant Staphylococcus aureus, Clostridium difficile-associated diarrhea, salmonellosis, and avian chlamydiosis, to name a few.

The U.S. Department of Health and Human Services provides the following guidelines for all veterinary employees and other animal handlers:

A report by the National Institute for Occupational Safety and Health reported that veterinarians and other people who routinely handle animals are at increased risk of developing allergies, asthma, and chronic obstructive lung disease. To prevent allergies from developing, keep animals in clean cages in a well-ventilated area. Use absorbent pads for bedding, and if they're not available, use corncob bedding instead of sawdust. The NIOSH report also suggested vets take the following precautions:

To obtain a copy of Preventing Asthma in Animal Handlers, see