Neither rain nor snow deter these road warriors, but road rage and working without benefits take their toll 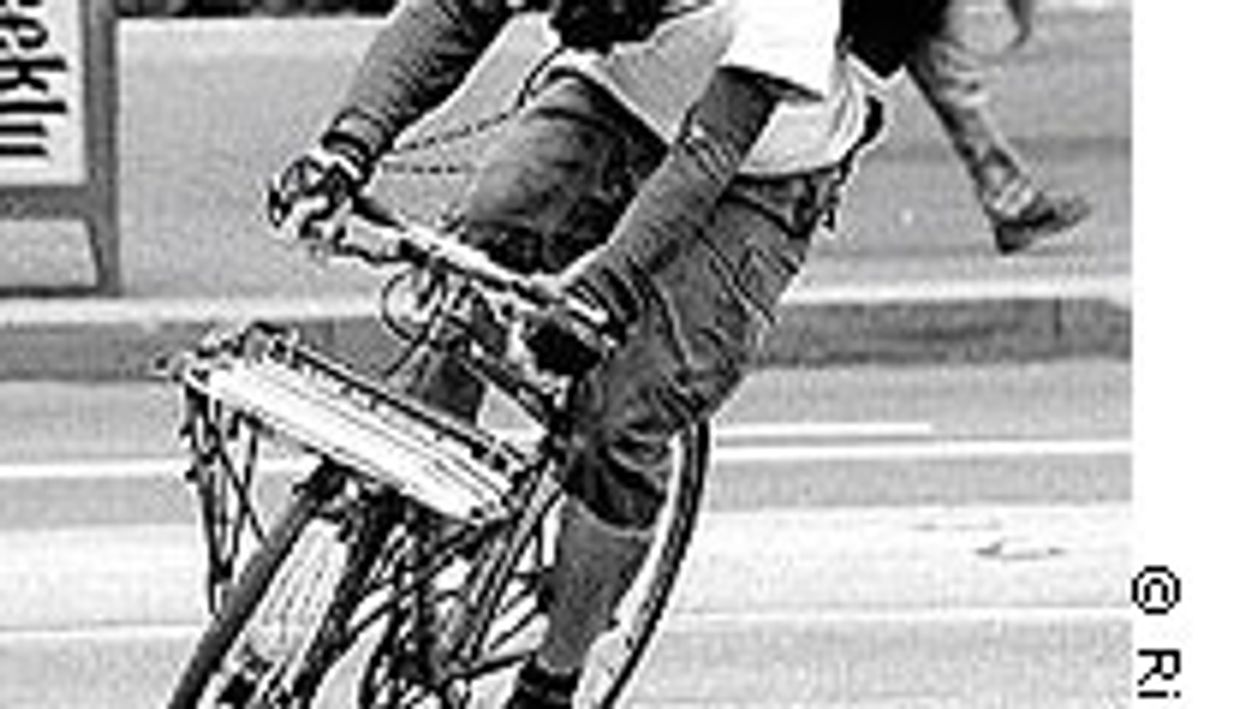 One summer day, Rebecca "Lambchop" Reilly was speeding through the streets of Washington D.C. The 31-year-old bike messenger was making great time until a nearby Mercedes made a sudden bid for a parking space. On the spur of the moment, the driver decided to wedge her car into one of the few available parking spaces. The back tire of Reilly's bike got caught on the back of the Mercedes, which pulled the startled bike messenger upside down. "Every time Mrs. Mercedes pulled forward, my pelvis flipped over my head," she recalls.

Reilly, who has self-published a book about bike messengers called Nerves of Steel, was fortunate: She walked away from the incident with only minor scrapes and bruises. The same isn't true for some of the nation's thousands of bike messengers who battle urban pollution, foul weather, and reckless drivers to deliver packages -- sometimes in a matter of only minutes.

Bike messengers have become part of urban lore -- but at high cost to themselves. Clad in bright spandex and aerodynamic helmets or black t-shirts and fatigues, these high-spirited road warriors often ride 200 to 500 miles per week, rain or shine. Though they hustle for companies with names like PedExpress and Lickety Split, they're rarely company employees and so have no health insurance, paid vacation, or sick leave. Although most riders are in their twenties, some messengers gracing our city streets are 50 or even older, according to figures supplied by the International Federation of Bike Messenger Associations (IFBMA), an umbrella group that unites messengers around the world. Very few are unionized, according to the bike association.

Because most messengers are paid by the delivery, time is of the essence: The faster they move, the larger their paycheck. Pedaling nonstop through the streets would be fine were it not for a cyclist's fiercest competition -- the automobile. For as long as cars and bikes have shared the same roads, drivers and cyclists have been vying for the right of way. When they clash, disaster can result. Many bike messengers have been injured by inadvertent collisions or by car doors suddenly flung open. Then there is the scourge of many bicycle messengers: road rage. In Chicago, an irate driver killed messenger Thomas McBride by repeatedly ramming into the cyclist from behind.

Don't look to the federal government for information on bike messenger injuries and fatalities, however. The National Institute for Occupational Safety and Health (NIOSH) has documented only three bike messenger fatalities from 1992 to 1998 -- a figure disputed by the international bike messengers association and metropolitan newspaper accounts of messenger deaths. "Two messengers were killed in San Francisco alone [in 2000], and I'm sure that there are similar numbers in other states," says Joel Metz, a San Francisco-based messenger who heads the IFBMA. On a recent Bike Messenger Appreciation Day in San Francisco, for example, messengers turned off their radios in a moment of silence to honor 50 Bay Area bike messengers killed on the job in the 1980s and 1990s.

To be fair, motorists are not always the guilty party when it comes to collisions. Sometimes messengers flatly ignore road rules and traffic regulations, including braking at stop signs and lights, using proper hand signals to indicate turns, and riding in designated bike lanes when available. And rain, slick roads, and trolley tracks add another layer of danger. "You can always crash without the help of a car or pedestrian," Mertz says. "Misjudge a corner or road conditions and you go down, just like you do riding a bike anywhere else."

The longer a messenger rides, Reilly says, the greater the odds he or she will adapt to the uncertain conditions of the road. Being "doored" -- slamming into a car door that is suddenly opened -- used to be one of her greatest fears. Through experience alone, she's pretty much overcome her terror of swinging doors. Harder by far has been learning to stay calm in the face of drivers' road rage. "Lots of drivers get angry with messengers for being in their way, yelling that we belong on the sidewalk," she says. "They aim to teach the messenger a lesson by riding on your tail. But I've learned. I get off my bike and tell them to go ahead and run over it. They become embarrassed because I yell to the pedestrians, 'This guy is trying to kill me with his car,' and that puts a stop to some of the problems."

Dr. Gary Klaud Miller, a sports medicine physician at St. Francis Hospital in Evanston, Illinois, cautions against such tactics. While letting loose and screaming at a bull-headed driver might help a messenger blow off steam, he says, it could backfire by escalating into actual violence. "[Messengers] should not put themselves into bad situations when they're not feeling up to the job," he says. Although he and Reilly both agree that the act of riding a bicycle in itself may help keep stress at bay, they suggest exploring other stress-reduction strategies as well. Among other things, Reilly says that breathing deeply when riding helps her keep a clear head.

An ounce of prevention

Wear and tear on the body after riding up to 500 miles a week is another occupational hazard. Many messengers complain of back and shoulder pain, usually due to carrying heavy bags -- up to 60 pounds, in rare cases -- across lean torsos. Miller says couriers need to know when to slow down -- and get off their bikes -- before an injury becomes chronic. He suggests doing daily stretches and using proper riding techniques and equipment.

"For example, messengers who ride in a more horizontal position -- like those on a road bike -- should take some of the weight off their hands by wearing padded gloves," Miller says. The problem is that chronic pressure on the hands puts pressure on the median nerve, causing numbness in the thumb, palm, or index, ring, and long fingers. Miller says that this injury is less common for messengers who ride upright bicycles such as mountain bikes.

Any frequent cyclist should also make sure a bike fits his or her body, Miller says. If the seat is set too low, he says, knee injuries are likely. He adds that investing money in a good saddle is crucial -- especially for men -- because constant riding can cause genital numbness. One study presented to this year's American Urological Association 's annual meeting reported that about half of 85 male frequent mountain bikers suffered from pain or tenderness in the scrotum. To relieve this problem, Dr. Miller says male bike messengers should consider purchasing a seat with holes cut out of the middle.

Why do so many bike messengers choose to work in ever-changing weather, battling the elements without protection? "I deliver packages on my bicycle for a living," says Shawn Bega, a messenger from Washington D.C. "It's all I've ever enjoyed doing, and I'm very good at it. I have it down to such a science it's scary. I eat, sleep, and breathe just to deliver packages. I love being a courier. I love delivering a package on time, a dry envelope despite a soaking afternoon thunderstorm, or a 40-pound box the client thought would need a car, and exceeding all expectations of what a bicycle rider can do."

In San Francisco, messengers have occasionally gotten in fights with the city's bus drivers, but a group of them recently met with MUNI drivers to hash out their differences and figure out how to share the road. San Francisco bike messengers also teamed up with the International Longshore and Warehouse Union to finalize the first union agreement of its kind since 1980, affecting 38 messengers who work for Speedway Delivery and Messenger Service. "Things had to get so bad for us to completely bond and act," messenger America Meredith told reporters. "People perceive this as a kids' game, but it really is a legitimate way to earn a living."

Keep your bike in good riding condition. Make sure the brakes work properly, the tires have enough air, and the chain is well-oiled. Wipe off any grime, especially after riding all day in bad weather. If you won't be doing your own repairs and maintenance, find a competent mechanic.

Always wear a sturdy bike helmet. Choose one with a heavy-duty styrofoam shell covered by durable plastic. Most styles have a visor, which is helpful for keeping sun and rain out of your eyes. As for comfort, more air holes mean the helmet will be lighter and cooler. These models are pricier, but a comfortable helmet is worth the expense if you'll be more likely to wear it.

Wear dayglo decals and attach a small battery-operated safety light to your messenger bag for riding in the dark. Accidents are less likely to happen if motorists can see you.

Invest in rain gear and a waterproof messenger bag. A regular bag will get waterlogged during a downpour, and the same is true for jackets and outerwear. Check the selection at your local bike shop or sporting goods store.

Carry a small first-aid kit. A bandage and some antiseptic may come in handy for those injuries that need attention, but aren't serious enough to call it a day.

This is an informal association uniting bike messenger groups in the U.S., Canada, and Europe. The association's Web site posts news and messenger-related links.

has a list of helpful FAQs for anyone interested in learning more about the demands of the job.

Established in 1970 by the Occupational Safety and Health Act, NIOSH is a federal research agency that makes recommendations to help employers prevent job-related injuries and illnesses. 800/356-4674.

Part of the Department of Labor, OSHA develops and enforces safety and health regulations in the workplace. 800/321-6742.

Kidder, Jeffrey. "It's the Job I Love": Bike Messengers and Edgework. Sociological Forum, Volume 21.May 2006.