Although eye injuries have long been a threat, in garages that require safety glasses, they have all but disappeared. 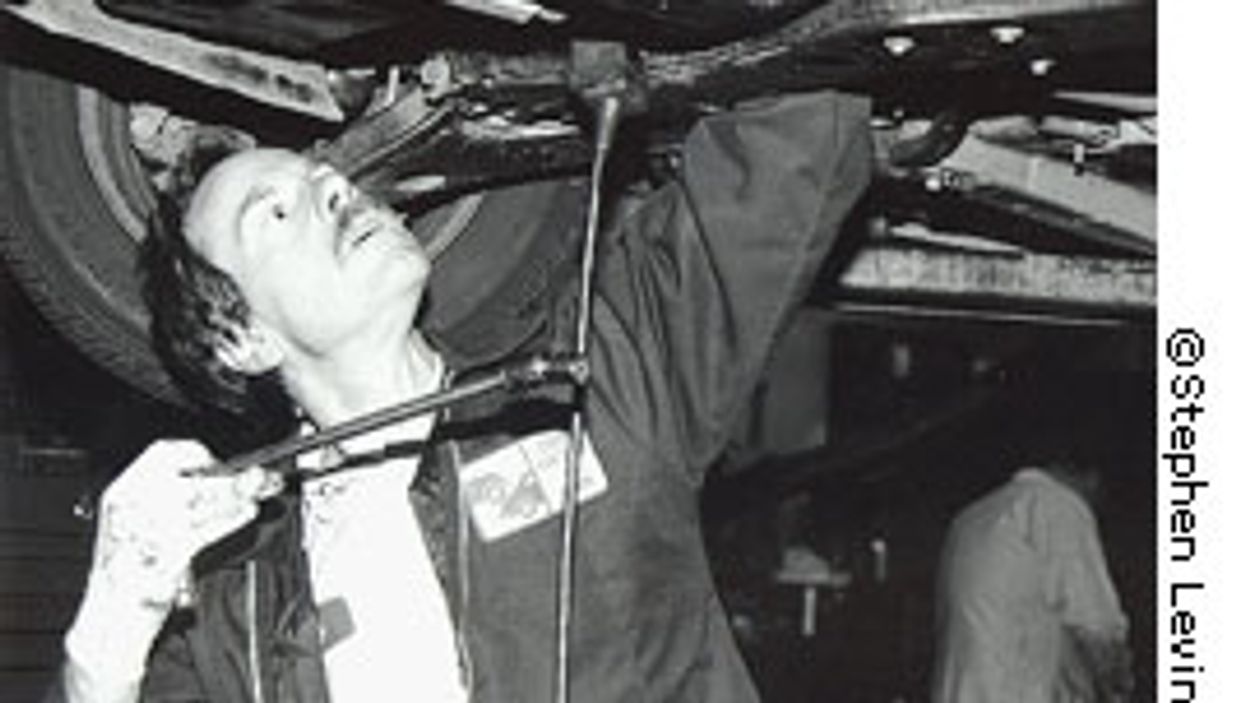 Longtime mechanic Carlos Contreras says, "a million things can go wrong when working on a car." And a lot of them hurt like heck. Once, while changing a brake drum, Contreras gouged his forehead on a sharp metal shaft sticking out from the wheel well. He jerked back in pain, only to bang his head against the fender. It was almost a moment of slapstick, but Contreras wasn't laughing. And if he hadn't been wearing his goggles, he says, that one little slip-up could have cost him an eye.

After more than 20 years of working in Chicago-area garages, Contreras has seen countless sprains, cuts, burns, and other injuries. Now a supervisor of a Midas garage, he makes sure his workers follow strict safety rules. But when he visits other garages, he often finds that the most basic precautions -- such as safety goggles and steel-toed boots -- are about as scarce as spare parts for a Yugo.

"You see mechanics walking around in tennis shoes," he says. "They're working on brake rotors that weigh 30 pounds and are four feet off the ground. What do they think is going to happen when one of those things lands on their foot?"

It's not that mechanics don't understand the concept of gravity. It's just that many of them are never taught the basics of safety, says George Swartz, retired safety director for Midas International. And, like many young men everywhere, they assume they'll never get hurt -- until one of those million things goes wrong.

Eye injuries may be the most common mishap in the business, Swartz says. Garages are often full of sparks flying from cutting torches and airborne pieces of metal launched from bench grinders, but most mechanics rely on nothing more than their eyelids for protection. "A lot of guys just close their eyes while they're welding," Swartz says.

The solution, of course, is simple. Because a large number of serious injuries involve the eyes, Midas mandated that all mechanics in company-owned garages wear safety goggles at all times. (Independently owned shops didn't have to adopt this rule.) Since then, eye injuries in those garages have practically vanished, Swartz says.

The goggles have to be worn constantly, because eye injuries are impossible to predict. Contreras once saw a 7-foot-long, steel-tipped parking brake cable spring from its box like a snake from a fake jar of peanut brittle. The cable went straight for a mechanic's face and left a deep gouge in his safety glasses, right in front of his eyeball.

Car repair can also be brutal on the hands. Mechanics routinely grab pieces of hot, sharp metal, often dripping with nasty chemicals. A recent study reported that 28 percent of auto mechanics had experienced more than 20 cuts on their hands in the previous year. The study also reported that 46 percent had an occurrence of hand eczema, a skin condition that can be brought on by handling solvents, oil, fiberglass, coolants, and other irritants.

Again, the solution is simple. Workers should wear gloves whenever possible, Swartz says. Some tasks, such as brake jobs, are too delicate for anything other than bare fingers, but mechanics could easily protect their hands and fingers for most of their day, he says.

Sore backs are another part of the job description. Some of the pain is unavoidable: Mechanics spend hours stooped under hoods, they twist and contort their bodies trying to loosen stubborn nuts and bolts, and they often have to lift tires, batteries, and other heavy objects.

Still, a little common sense and some basic safety training could prevent a lot of pain, Swartz says. For instance, mechanics could lower the hoist a couple of feet before taking off tires. And although most would never consider it, they could always ask for help with a heavy load or a stuck bolt, he says. There are devices that could help, too, such as jib cranes for lifting heavy things or, for loosening a nut, simply attaching an extension to a wrench for better leverage. Without using these tools when appropriate, mechanics risk pulled back muscles, shoulder strains, and other injuries.

Dr. Chris Kunis of Shady Grove, Pennsylvania, who treats industrial injuries, urges mechanics to make better use of their toolbox. "In moving heavy objects, many times employees just lift them without using assisting devices like a hoist, and so hurt their backs. They work with what they have in their hands, mostly because they just don't go back to the toolbox for an extension and so on," he says. "And then a nut will slip and they'll smash their hands."

And then there's that pesky gravity: Whenever a car goes up on a hoist, mechanics should expect parts to start falling. In addition to steel-toed boots, they should protect themselves with "bump caps," the garage version of the hard hat, Swartz says. Not only will they be shielded against falling objects, they'll also feel less pain when -- not if -- they bang their head against the undercarriage, he says.

Garages may have a long way to go when it comes to safety, but there has been some progress. Not long ago, for instance, mechanics inhaled huge gulps of asbestos-laden brake dust every time they replaced a brake. Today, any garage that performs more than four brake jobs each week is required to have a device that washes the dust away before the brake is removed. "Controlling brake dust is the biggest stride that we've made in the last 15 years," Swartz says.

As with any job, awareness is the most important safety device. "I've seen people do crazy stuff because they were thinking of something else," Contreras says. "You just have to pay attention to what you're doing."