What is it like to work in a hostile, uncontrolled environment that can reach several thousand degrees? 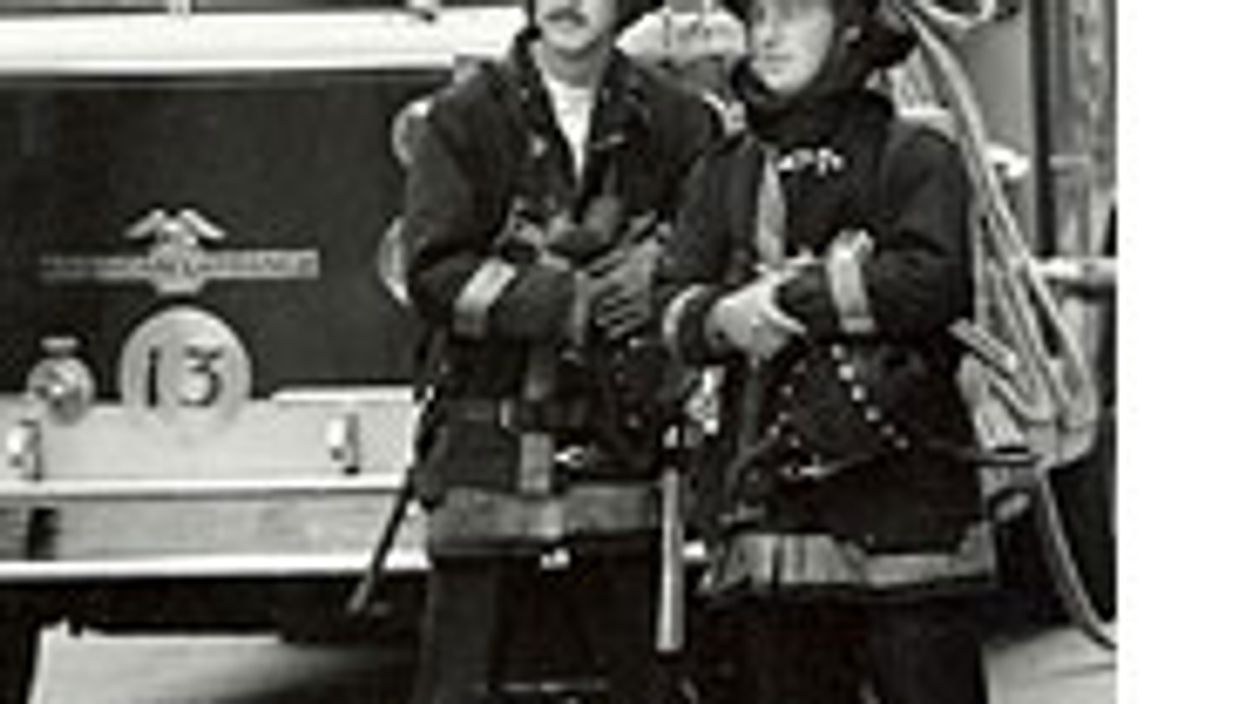 No one will forget the devastating collapse of the World Trade Center towers on Sept. 11, 2001. Nor will we likely forget the images of the heroic firefighters who tried to save those who might still be alive under the 110 floors of collapsed concrete and steel. The search stretched on for weeks and was exceedingly dangerous. Every time rubble was moved, it created a vent for oxygen to feed the smoldering fires beneath. Included among the final death count for the morning of Sept. 11 were 343 firefighters, the highest number of fire service workers ever to die in a single incident -- or even in one year -- in the history of the United States.

The national lessons born of Sept. 11 are many and varied. But one result, without a doubt, was a greater national understanding and appreciation for just how dangerous a firefighter's job is. On average, 105 firefighters lose their lives on the job each year, which has been the norm for the last decade (not including 2001's tragic losses).

Despite efforts to reduce firefighter mortality with better protective gear, breathing machines, and a buddy system that sends two firefighters into a burning building together, officials have not been able to lower firefighter fatalities. Structural collapses and explosions along with wild fires are the incidents that claim the lives of most firefighters. Others die of heart attacks and strokes brought on from overexertion and stress on the job. George Burke, spokesman for the International Association of Fire Fighters (IAFF), puts it this way: "Among firefighters, death is the most serious problem."

Anyone who has even seen a burning building can imagine the more obvious dangers of firefighting. If trapped in a fire raging out of control, firefighters may be fatally burned or suffocated. Firefighters can fall through a burning roof, get caught in a backdraft, or have a building collapse on them, trapping them inside a raging inferno. Newer floor constructions using composite wood that replaced traditional wood floors in the early 1990s puts firefighters at greater risk of falling through floors. The composite wood joists that support these floors can collapse in a matter of minutes, according to the National Institute of Occupational Safety and Health (NIOSH).

Other less-obvious hazards, such as being hit by cars while at the scene of a highway accident or being electrocuted if a metal ladder touches a power line, pose major risks as well. Many firefighters are killed getting to the scene of a fire. Since 1984, motor vehicle collisions have accounted for between 20 and 25 percent of firefighter fatalities each year. And two common diseases that researchers have linked to fire fighting -- heart disease and cancer -- caused 90 percent of the deaths from occupational disease.

A three-year study of employees in California found that firefighters reported the second-highest rate of work-related asthma, topped only by janitors and cleaners. Researchers from the California Department of Health Services found that about half the asthma cases were related to exposure to irritating materials -- a much higher rate than previously thought.

Some firefighters have suffocated on duty even in the absence of a fire. NIOSH reports include an account of volunteer firefighters in Pennsylvania who responded to a call to remove a dead animal from a well and pump out the water. One collapsed after breathing in carbon monoxide fumes from the company's portable gasoline engine-powered pump; he was later rescued and revived, but three others died in rescue attempts. As it turned out, only two of the eight volunteer firefighters attempting a rescue were supplied with respirators.

Heart disease -- whether it strikes in the line of duty or years later -- can develop as a result of cumulative job stress, according to Burke. "Firefighting is an incredibly stressful profession," he says. "It's an uncontrolled environment -- firefighters have no controls over their workplace. It's a hostile environment and it can reach up to several thousand degrees. They're wearing protective clothing from head to toe, which is heavier than most winter clothes, and they're carrying between 75 to 90 pounds of gear, including breathing apparatus. In addition, they're working at a very high rate of adrenaline and they're physically exerting themselves." These dangerous levels of exertion and stress, he says, set the stage for a firefighter to suffer an on-the-job heart attack or stroke.

In addition, the very nature of the job means that firefighters may find themselves in agonizing life-or-death situations, which can lead to depression or post-traumatic stress syndrome.

"In each firefighter's career, there will be a couple of episodes in which you were helpless and someone died and you couldn't do anything about it," says John Hanley, a veteran San Francisco firefighter who's been on the job 20 years now. He himself is haunted by the time when he was called to rescue a teenage boy trapped under a car that had barreled over a hill. "He was only 17 or 18 and went to the same high school I went to," Hanley recalls. "It took us four or five minutes [to free him], and we were talking to him, and he died. We just couldn't tip the car back fast enough; it was teetering on his body. He was looking around -- they have that look, that ash-colored skin, and that look in their eyes. They give you the look, and you know that's it. That was 10 years ago, and it's one of those things I think about a lot."

Firefighters also suffer a higher-than-normal risk of certain types of cancer, including bladder cancer and lymphoma -- something that some experts attribute in part to the toxins that firefighters are exposed to inside burning buildings. Although respirators and surplus tanks of air are mandatory, even these safeguards don't prevent all toxic substances -- such as benzene, asbestos and polycyclic aromatic hydrocarbons -- from entering the system. "There's plastic and materials like foam and synthetic rugs that we didn't have 30 years ago; it's extremely hazardous," says Hanley. Still, he observes, San Francisco firefighters tend to shy away from talking about such issues. "We're the John Waynes, the tough guys who don't complain," he says with a wry laugh.

For firefighters battling wildfires, the extra protection afforded by air tanks is not even an option. "They cannot physically deal with the extra weight, and the resources are not available to refill it every 40 minutes," says White. To help combat additional cancer risks, White says, most fire stations now require tobacco-free work environments.

Firefighters also face some of the same risks as health-care personnel. They can be routinely exposed to communicable diseases such as hepatitis, HIV, tuberculosis, and meningitis. To reduce the likelihood of contracting tuberculosis, firefighters are encouraged to wear respirators when called into a commercial space or residence. While pulling seriously injured people from buildings or giving first aid, they can easily come into contact with blood and other body fluids. To protect themselves, firefighters should "glove up," or wear gloves, at all times and follow OSHA's regulations concerning blood-borne pathogens, Burke says.

Of course, even with gloves on and following stringent prevention guidelines, firefighters are hard put to avoid all contact with body fluids. Hanley mentions an incident in which a disoriented man he was helping across the street suddenly spit into his eye. Fortunately, after being tested for a variety of diseases, he came up negative.

Even if firefighters are in good shape, it's easy to be injured while putting out a blaze, breaking down doors, or charging into a burning building. Sprains and strains account for the majority of firefighters' injuries, followed by lacerations and contusions, according to the IAFF report. Back pain is also common, as is hearing loss, often caused by wailing sirens.

Even the thick layers of protective clothing worn by firefighters don't keep them from getting bruised and lacerated. As Hanley puts it, "glass can cut through anything." If goggles or face protectors get knocked off in the line off, the eyes are left vulnerable, Burke says.

In addition, heavy clothing can actually contribute to injuries in the form of back strain, heat exhaustion, and heat stroke. And while modern protective clothing allows firefighters to penetrate to the depths of a fire, Hanley says, it has created a host of new problems. "We're farther into the fire than before because we're fully encapsulated," he says. "We're now seeing burns from steam."

To cut down on stress-related illnesses and strains, many fire departments are incorporating wellness and fitness programs into the daily shift. By encouraging firefighters to exercise regularly, the industry hopes to reduce some of the innate stress and tension that comes with the job.

Burke says firefighters can also protect themselves by taking some basic precautions: wearing earmuffs or earplugs to guard their hearing when riding on fire trucks, drinking enough liquids to prevent dehydration, and getting trained in how to prevent communicable diseases. And to help firefighters cope with mental anguish of failed rescues and other job-related traumas, some fire departments provide mental health counseling.

Despite the hazards of the job -- which are legion -- Hanley says the thrill of firefighting keeps many people in the business. "I would say that for firefighters, it's the best job they'll ever have," Hanley says, likening firefighters to modern-day warriors. "You'll see that people don't quit. Rarely do you see a firefighter leave to another profession. It's the camaraderie and the team aspect: The guys like helping people. It's a real fun job -- the danger adds a little zest to your life."

This labor union represents over 280,000 professional firefighters and paramedics in the United States and Canada. The IAFF, which was formed in 1918, helps its members prevent and deal with on-the-job hazards.

The NFPA develops guidelines and standards for firefighters, as well as safety and educational materials.

NIOSH. Preventing injuries and deaths of fire fighters due to structural collapse. Publication No. 99-146, August 1999. http://www.cdc.gov/niosh/99-146.html