Lifeguards perform nearly 18,000 beach rescues a year -- all but a few of them successful. How can they protect themselves while saving the rest of us? 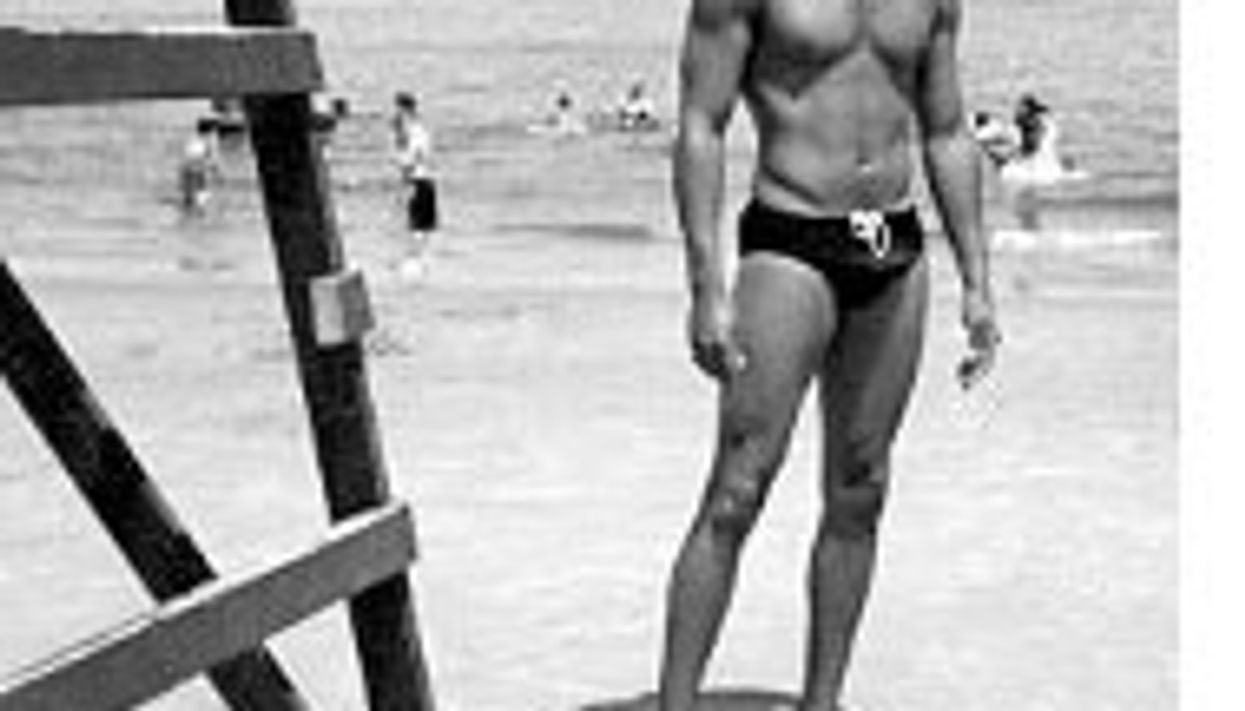 One muggy August day 10 summers ago, 16-year-old lifeguard Chris Davis was hot and bored. He and his friends were winding up the swim season at Orchard Beach in the Bronx and began entertaining themselves by seeing who could dive the furthest into the ocean off the tall lifeguard chairs. When Davis took his turn, he tucked his chin to his chest and dove, but forgot to push himself out into the deeper water. Instead, he plowed straight into the sand below him and broke his neck. "I found myself laying face down in a foot and a half of water," he says. "I thought I was going to drown, which was pretty ironic considering that I was the lifeguard."

He lay immobile for about 15 seconds before finally commanding his numbed arms to drag himself out of the water. Climbing onto the beach in front of his stunned friends, he collapsed and lost consciousness. He came to in the pediatrics ward of the hospital, which sent him home without treatment because they couldn't locate his parents. The next morning Davis couldn't sit up, and his father rushed him to the emergency room. There, he found that his neck had been fractured in the accident and had a double dislocation as well; moreover, his sternum was cracked from where his chin had slammed against it. Despite the delayed treatment -- and his refusal to smudge his reputation by wearing a halo or hard neck brace at school -- Davis made a full recovery.

Few lifeguards lead the sun-drenched, chatty lifestyle you see on Baywatch. Besides keeping an eagle eye on swimmers, patrolling the shore, and staying alert even when things get dull, they sometimes have to risk their lives to save people from drowning. The coast of Southern California, for example, sees thousands of rescues in a given year by lifeguards who have only minutes or even seconds to snatch from danger those in distress; nationally, lifeguards rescue tens of thousands of people each year, according to the US Lifesaving Association. These victims include boaters, surfers, swimmers, and even unsuspecting sightseers swept off rocks, jetties, or piers by tumultuous surf, but the majority are unsuspecting swimmers towed out to sea by riptides.

"The ocean is extraordinarily powerful and relentless," says Chris Brewster, chief of the San Diego Lifeguard Service. Lifeguards in Southern California, in fact, are enrolled in high-risk retirement plans that cater to other hazardous jobs such as police officers or firefighters. Of the 85 career lifeguards under Brewster, who rotate being on-call 24 hours a day, he encounters approximately two disability retirements a year, typically at 30 to 35 years of age.

Because there are so few mechanical devices to assist the lifeguard, it's basically "human being vs. the power of nature," which accounts for the high number of orthopedic injuries, Brewster says. Lifeguards train by running on uneven surfaces, he says, and they often suffer neck and back injuries from lifting victims.

An additional hazard for both pool or ocean lifeguards is the exposure to blood. Both may have to rescue someone who has sliced open his or her head while diving, and ocean lifeguards may face even graver dangers. According to an Occupational Safety and Health Administration (OSHA) study, "Examples of ocean lifeguard exposure include rescuing swimmers stung by a man-of-war or attacked by sharks or other ocean dwellers, surfers suffering head or body trauma and cuts from surfboards, victims of boating accidents, [and] swimmers propelled by the surf into piers or pilings covered with barnacles."

Ironically, the summer season is not the most treacherous time for an ocean lifeguard, but rather the off-season when the water is colder and rescues involve pounding surfs up to twenty feet. One winter one of Brewster's San Diego lifeguards performed a perilous rescue in rough surf and received the Medal of Valor from the United States Lifesaving Association.

"A victim was struggling very near a cliff area in 10-foot surf, and our lifeguard responded as a crewmember and went into the water after the victim," Brewster recalls. "A large wave came, and he protected the victim, but they were both shoved into the cliff and traumatized. Our lifeguard almost lost consciousness but was able to get the victim out away from the rocks and into the rescue boat."

Both were taken to the hospital, but, according to Brewster, the lifeguard has never fully recovered from his head and back injuries. "Unlike a pool that you can close when you think it's too dangerous, you can't close the ocean," says Brewster.

Pool lifeguards: "You've really got to be watching"

Brad Wright is a burly high school senior from Coffee County, Tennessee, and a summer lifeguard at the University of the South in Sewanee. He stresses that much of his work is preventive. "Every Monday, Wednesday, and Friday, there's a bunch of little kids that come, and you've got to really be watching them."

Wright also lifeguards at a nearby lake once in a while where he watches groups of mentally challenged adults on swimming excursions. He has considered lifeguarding at a lake on a more permanent basis, because pool lifeguards in middle Tennessee tend to make around $6 an hour, while lake lifeguards make $11 an hour.

"Still, if you're a lifeguard at a lake," says Wright, "you've got to put up with a lot of different people, mainly drunks." At a lake near Tullahoma, Tennessee somebody pulled a knife on another swimmer, and the lifeguard had to call the police. A lake's murky water and size also make him worry that he might not see someone who's drowning go under.

The most hazardous part of Wright's job at the indoor Olympic-sized swimming pool at the university involves the mixing of chemicals, including chlorine, acid, and sodium bicarbonate, that are used to keep the water clean. Wright makes sure a second lifeguard always assists him just as a precaution, and they wear latex gloves when working with the chemicals down in the pump room. He admits he doesn't normally wear protective glasses but averts his eyes to avoid any contact with the chemicals. "If something were to go wrong, chlorine gas masks are available. If you follow a certain procedure," Wright explains, "it's not bad, but if you're not careful, you could seriously hurt yourself."

Hidden hazards such as poor ventilation can cause skin rashes, respiratory and other problems for lifeguards. When lifeguards who worked at an indoor pool at a resort in Mason, Ohio complained of skin rashes, eye and nose irritations, shortness of breath, wheezing, coughs and fevers, the county health department asked the National Institute of Occupational Safety and Health to investigate. Investigators traced the lifeguards symptoms to a poor ventilation system. They found high air level concentrations of a contaminant endotoxin and of a byproduct of chlorine known as chorlamines, and recommended ways to improve ventilation.

According to Brewster of the San Diego Lifeguard Service, there are many ways lifeguards can protect themselves:

Besides the unpredictable factors of the ocean, Brewster says, the crowds can get unruly. "Law enforcement problems increase with the level of attendance and proximity to urban areas," he says. "Some communities have decided to have lifeguards and police beach teams or combine the two duties."

And Bernard J. Fisher, director of the American Lifeguard Association, says, "We feel -- as does the American Medical Association -- that lifeguards should be treated as medical professionals, equivalent to nurses, firefighters, and paramedics. A properly guarded facility or beach saves lives."

The rewards of lifeguarding speak for themselves. Brewster notes the advantages of an excellent work environment and the opportunity to stay in shape while on the job. The pay for ocean lifeguards can range from about $11 an hour to over $20, depending on which part of the country you're in and whether it is a seasonal or permanent position. All full-time lifeguards receive a benefits package, which includes health, dental, and vision insurance.

Other rewards of the job are more intangible. Chris Davis, who was badly injured after diving into shallow water as a teen, didn't let the incident stop him from working as a lifeguard at Orchard Beach every season for the next 10 years. Unfortunately, his injury didn't work as a talisman against future accidents. The very summer after the diving fiasco, he stepped on the bottom of a glass bottle and had to get eight stitches on the bottom of his foot. "I was dubbed the 'accident-prone one,' " he says with a laugh. Nonetheless, he loved the work.

So does Brad Wright. On his most recent job this summer lifeguarding the group of mentally challenged adults at the lake, Wright says with an easy smile, "Hey, I'm their buddy. They want to show me what they can do in water, what toys they have. It's pretty great."

Established in 1970, NIOSH is a federal research agency, which makes recommendations to help employers prevent job-related injuries and illnesses.

Bureau of Labor Statistics. Occupational Employemnt and Wages, May 2005.