Lumberjack Tim Nesmith didn't hear the falling tree until it landed on his head. What saved him? 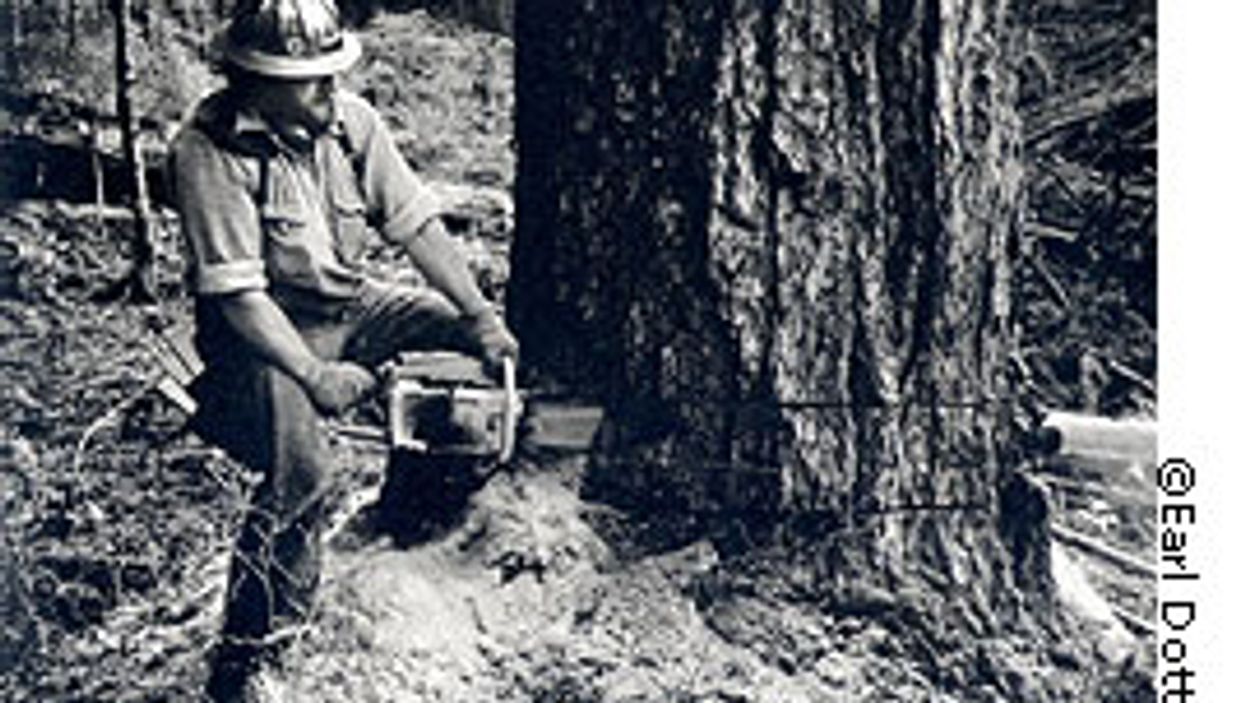 Tim Nesmith, a 23-year-old logger living in Greenough, Montana, keeps a dented hard hat in his bedroom. It's part conversation piece and part souvenir, a memento of the day he nearly had his head cracked open.

Nesmith is one of the lucky ones. Every year, close to 100 loggers are killed on the job and thousands more are injured, making this one of the most dangerous lines of work in America. In 2007, the fatality rate for loggers was 23 times higher than the overall fatality rate among workers in the United States. (Loggers and commercial fishermen have a long-standing duel for the dubious distinction of top honor.) A report in the American Journal of Industrial Medicine once described the danger with this sobering statistic: A person who makes a career of cutting down trees has a one in 20 lifetime chance of dying on the job.

About two-thirds of logging-related deaths are caused by falling limbs or trees -- a scenario Nesmith knows all too well. It happened one January day while he was sawing down Douglas firs on a steep slope in western Montana. Standing in two feet of snow, he would cut notches into trunks with his chainsaw and get the heck out of the way when a tree started to fall.

While Nesmith was dodging his own trees, loggers working uphill wrapped thick chains around a dozen other fallen firs. The chains trailed behind a heavy-duty tractor known as a skidder. As the driver of the skidder began a slow trek downhill, one of the trees dragging behind him bumped into a 90-foot-tall "snag," a still-standing but completely dead tree with no bark or needles -- and very few roots.

Nesmith was standing 80 feet away when the snag fell. With his earplugs in place, he didn't hear the branches breaking behind him or the yells of the skidder operator. The next thing he knew, he was lying woozy in the snow, staring up at the pale and trembling operator of the skidder. "He was pretty sure he had killed me," Nesmith says.

Part of the treetop -- slightly wider than the fat end of a baseball bat -- snapped cleanly across Nesmith's head. As the main trunk drove him into the snow, dead branches raked his back and ripped off his shirt. He was unconscious for a few minutes, but the only lasting reminders of the accident are the scars on his back, scar tissue from torn muscle in his shoulder, and, of course, the dented hard hat. "I got that hat at a garage sale," he says. "It was the best $4 I've ever spent."

But hard hats aren't always enough to save a logger. It certainly didn't help the 33-year-old who died when his chainsaw kicked back and hit him in the throat, or the 28-year-old who fell under the wheels of a skidder. It wouldn't have helped Nesmith, either, if he had been standing a little closer to the snag and caught a wider part of the trunk. If a tree is big enough, it doesn't matter what a logger has on his head, says Ed LaFavour, coordinator of Minnesota's Log Safe program. In many cases, he says, hard hats simply make it possible to have an open casket at the funeral.

It's impossible to take the danger out of logging, but at least 90 percent of deaths in the industry are completely preventable, says Paul Cyr, a logging safety specialist with the Occupational Safety and Health Administration (OSHA). The answer isn't more safety gear; almost all loggers religiously wear their hard hats, steel-toed boots, chaps, and every other form of protection, Cyr says. The real key to safety, he says, is knowledge.

It takes a lot of training -- and a lot of time in the forest -- to understand the behavior of falling trees, Cyr says. "Working in the woods is a [constant] learning curve," he says. "When you stop learning, that's when you get into trouble."

A highly trained, highly experienced logger calculates a tree's height, its natural lean, the slope, and the direction of the wind before he ever fires up his chainsaw, Cyr says. He also scans the canopy above for large, broken limbs perched in the branches -- loggers call these widowmakers -- and inspects the area where the tree is about to land. But first and foremost, loggers must always watch for each other, Cyr says. The cardinal rule of the job is that nobody should be within two tree lengths of anyone cutting down trees. If the rule had been followed that January day near Placid Lake, the snag would have landed well short of Nesmith's head. "We work a littler farther apart now," he says.

Loggers must also learn to take more control over falling trees. One way to do that is to cut "open-faced notches," wedges with a flat bottom and a top angled between 70 and 90 degrees. (The two most commonly used notches, known as the Humboldt notch and the conventional notch, use angles of about 45 degrees.) Trees cut with an open-faced notch fall relatively slowly, giving loggers plenty of time to walk away, LaFavour says. Furthermore, the notch almost guarantees that the tree will fall straight to the ground instead of "binding" at the stump, he says.

Once a tree has hit the ground, it can still hold some dangerous surprises. Loggers must watch out for limbs that have become severely bent. According to a report on logging hazards from the Bureau of Labor Statistics, the tension can be enough to throw a large limb 50 feet. By OSHA standards, nobody should be with two tree lengths of anyone cutting a spring-loaded limb.

Meanwhile, the logging industry has other tools to prevent injuries at its disposal. The vibration from power saws can result in a circulatory disorder known as White Finger Syndrome (WTS). The good news: studies suggest that chain saws designed to cut down on vibration can significantly reduce the incidence of white finger.

Cyr foresees a day when even Rocky Mountain and Appalachian forests can be nearly as safe as those Minnesota groves. OSHA has pushed for more training programs, and few professional loggers today are entering the woods without a clear understanding of the hazards, he says. "Loggers are very independent and very proud, but they're also professionals, and professionals need training." Reliable statistics on injuries and fatalities tend to lag by a couple of years, but Cyr suspects the number of serious accidents is already starting to plummet.

In the end, loggers get their lessons from one of two sources: Training programs or trees. And Tim Nesmith can say for sure which lesson hurts less.

Bureau of Labor Statistics. Fatal occupational injuries by industry and event or exposure, All United States, 2006.