Behind the gleaming aisles of consumer goods is a world of forklifts, slippery floors, and accidents waiting to happen. 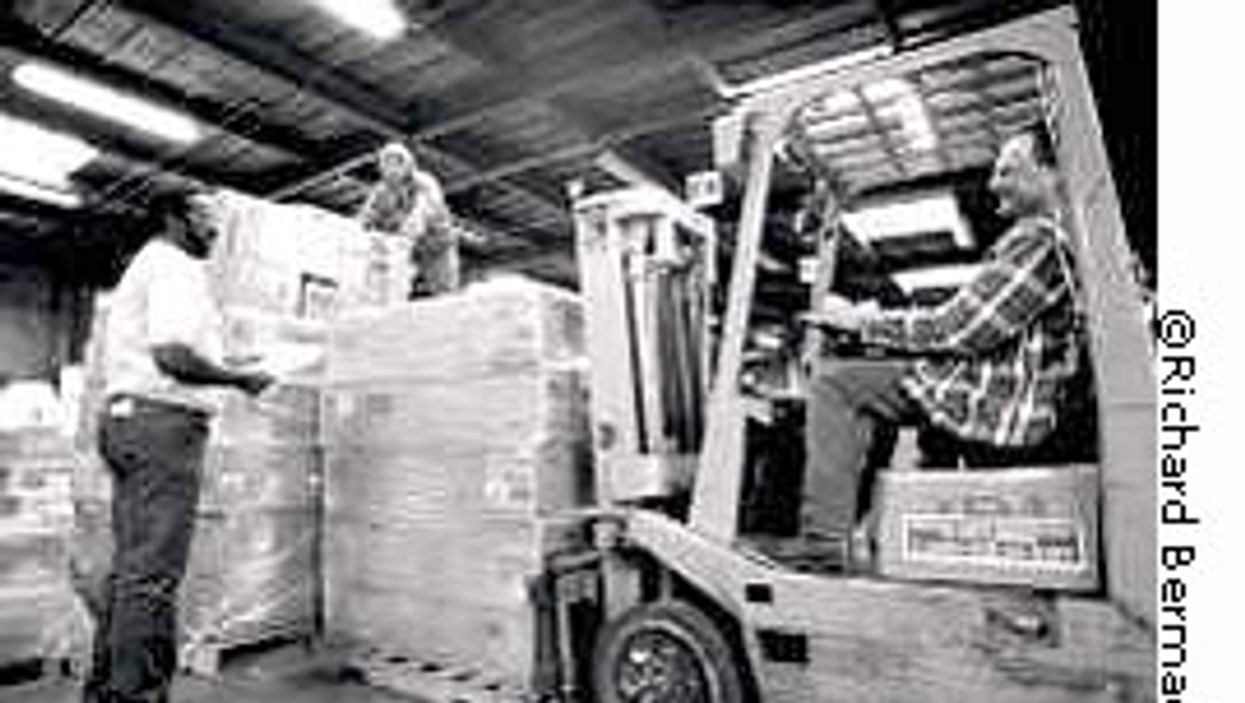 March 20, 2001: It was a day like any other for the 41-year-old warehouseman. He spent the early part of his shift uneventfully digging out rolls of coiled steel at the small New Jersey cutting plant where he worked. However, moving coiled steel was no easy feat, even with a 20-ton capacity crane. The rolls of steel weighed between 5,000 and 40,000 pounds and were stacked in long rows on the floor, two or three high, making them difficult to maneuver. As the warehouseman stood in a 2-foot wide aisle facing a row of coils, one slipped causing it to slide off the ones beneath it and into the warehouseman. Crushed by a 10,150 pound coil, the man died suddenly and silently, leaving behind a wife and three children.

Being crushed by objects are an all too common hazard for warehouse workers, along with slips and falls, forklift accidents, chemical spills, and fires. But warehouse workers themselves single out a more ubiquitous threat: back pain.

This is evident at Albertson's grocery warehouse in San Leandro, California, especially on the day seafood goes on sale. For warehouse workers, it's no picnic. "When crab and lobster are on sale, the cases come in fully packed with ice," says former Albertson's worker Richard Fierro. "Just the crab and lobster alone weigh about 50 pounds." By the end of the day, the ice has melted all over the floor, converting it into a slick free-for-all, Fierro says. And lugging those heavy crates back and forth really takes a toll on the back.

"I can't think of anyone who's been in the grocery industry over a period of time who doesn't have back injuries," says 52-year-old former warehouse worker Jack Peasley. "They come with the job."

Peasley spent 31 years as a warehouse worker for Lucky's grocery stores (now Albertson's), where he developed chronic back pain. He enjoyed the camaraderie and good salary that went along with his work, but attributes his persistent lower back problems to constant bending, twisting, heavy lifting, and stacking. These days he's giving his overtaxed vertebrae a rest and working as a business agent for the local Teamsters union in Oakland, California.

"Name any injury, and we've had it"

Peasley and Fierro's experience is typical of workers who spend their days hefting and moving merchandise for supermarkets and stores such as Home Depot and Ikea. Warehouse workers are at least eight times more likely to suffer back problems than other workers, according to National Institute of Occupational Safety and Health (NIOSH). In 2007, 7 out of every 100 warehouse and storage workers suffered an on-the-job injury, according to the Bureau of Labor Statistics. Pain, suffering and potential loss of livelihood for the worker are bad enough. But injuries take their toll on employers as well. The National Safety Council estimates that industries in the United States are losing as much as $336 billion a year to workers' non-fatal injuries.

Beyond back strain, warehouse workers are plagued by other musculoskeletal injuries, including pulled muscles, pinched nerves, strains, and sprains, according to federal reports. Repetitive tasks, such as the wrist-twisting required to operate a transporter, also results in thousands of cases of carpal tunnel syndrome, an excruciatingly painful and debilitating condition that impinges on nerves in the wrist. Similar repetitive strain injuries can also occur in the shoulders, elbows, knees and feet. "Name any injury, and we've had it," says Peasley.

How can you prevent these potentially disabling injuries? Many warehouse workers turn to back belts and supports to buoy up vulnerable muscles, but Fred Blosser of NIOSH says the agency doesn't advise such belts for heavy lifting. In fact, there is evidence that the belts cause loss of muscle tone and fatigue over time because they bind the muscle groups together. They can also cause a false sense of security prompting people to attempt to lift weight they normally would reject as too heavy. NIOSH recommends learning and using proper lifting techniques instead. Among other things, the agency recommends that workers avoid bending and twisting the body in the process. (See Tips for Working Safely, below, for more details on lifting.)

Slips and falls are another major cause of many injuries to warehouse workers, according to Steve Stallone, communications director for the International Longshore and Warehouse Union. It's for this reason that they need to learn to be light on their feet and constantly on the look-out for spills, fallen objects, and moving vehicles.

For these reasons, keeping the warehouse organized isn't just a matter of good hygiene, but a life-and-death concern, as it is for many industries. "You want to make sure that areas are clean, orderly, and uncongested," says OSHA representative Russelle R. McCollough. Keeping aisles and passageways clear at all times, cleaning up spills without delay, and making sure items are stored properly is crucial. What can happen when those details are overlooked occurred recently in a Home Depot store in Connecticut recently, when a 41-year-old employee was crushed to death by a 2,000-pound load of improperly stacked lumber.

Occupational health experts are familiar with such deaths, which they say are almost always preventable. J. Paul Leigh, a professor of epidemiology and preventive medicine at the University of California, Davis, found 10 to 15 deaths per 100,000 warehouse workers, making it one of the top 100 deadliest jobs. Falling boxes and containers caused nearly a third of the deaths in warehouses, followed closely by accidents in forklifts and other vehicles. The rest of the workers died from burns, heart failure, heat, and accidents involving various machinery or merchandise.

Unrealistic production quotas only add to the danger. When employees race against the clock, ignoring safety practices and common sense, mayhem can result. "People crash into each other on transporters and forklifts," Peasley says. "The forklift can tip over from being overloaded with pallets."

Stallone agrees. "People are running around like crazy trying to meet production standards. That's how they hurt themselves." He adds that when fatigue and exhaustion set in, the potential for accidents soars.

Although some manufacturers are making ergonomic equipment, there's still a long way to go. The vibration from forklifts and other vehicles, for example, can cause a lot of wear and tear on workers' bodies. Even vibration from other people's forklifts can be unhealthy. In Peasley's view, the vehicles need shock absorbers. Without them, he says, driving over a small stick feels like "getting hit on the bottom of your spine with a hammer."

The problem is, most of these vehicles don't come with shock absorbers. And here's the Catch-22: If an employer were to add them, he would be in violation of OSHA standards that prohibit anyone but the manufacturer from adding or modifying items on a vehicle. The employer also would be liable for any injuries to workers that result from the modifications.

Experienced workers can think of a few others things that would make warehouse work easier on their bodies. On Peasley and Fierro's wish list: eliminating the lowest level on the multilayer racks on which products are stored so that workers don't have to constantly bend down to lift and stack items. In a 1992 grocery warehouse study, NIOSH suggested raising rack levels for just this reason, and some are available. However, the multilayer racks are an industry-wide standard and are not currently under revision.

Peasley also suggests replacing the transporter control's wrist-twisting handle with an ergonomic grip, which might reduce the incidence of carpal tunnel syndrome. Indeed, some newly built forklifts, such as those from the Raymond Corporation of Greene, New York, feature ergonomic advancements such as handheld grip controls.

Despite the aches, it's not all bad. When asked if he'd go back to work in the warehouse, Peasley is upbeat.

"With my seniority? Yeah," he says. "It's secure employment, good wages, and a good pension." And one day, he says, injuries will no longer be considered simply part of the job.

A federal agency that makes recommendations to help prevent work-related injuries and illnesses. NIOSH offers a number of publications on workplace safety, including a guide to safe lifting practices.

For thorough, practical advice on preventing forklift injuries, see the NIOSH Alert, "Preventing Injuries and Deaths of Workers Who Operate or Work Near Forklifts":

Part of the Department of Labor, OSHA creates and enforces workplace health and safety regulations.

An international association for warehouse managers, WERC distributes "Warehouse Safety Program Guidelines" and has up-to-date information on OSHA regulations for managers and employees.

There are over 500 local unions and 1.4 million members in North America. (Listed in the phone book or at: http://www.teamster.org).

If you're in California, Washington, Oregon, Alaska or Hawaii, you can also contact the International Longshore and Warehouse Union, which has approximately 42,000 members.

NIOSH. Report of Written Testimony From Linda Rosenstock, M.D., M.P.H., Director of NIOSH as submitted to The Subcommittee on Workforce Protection. May 21, 1997.

Centers for Disease Control. Productivity Losses Due to Injuries. April 2006.

Bureau of Labor Statistics, Industries at a Glance: Warehousing and Storage NAICS 493.