One careless moment can lead to serious injuries -- not to mention the occasional pants fire. 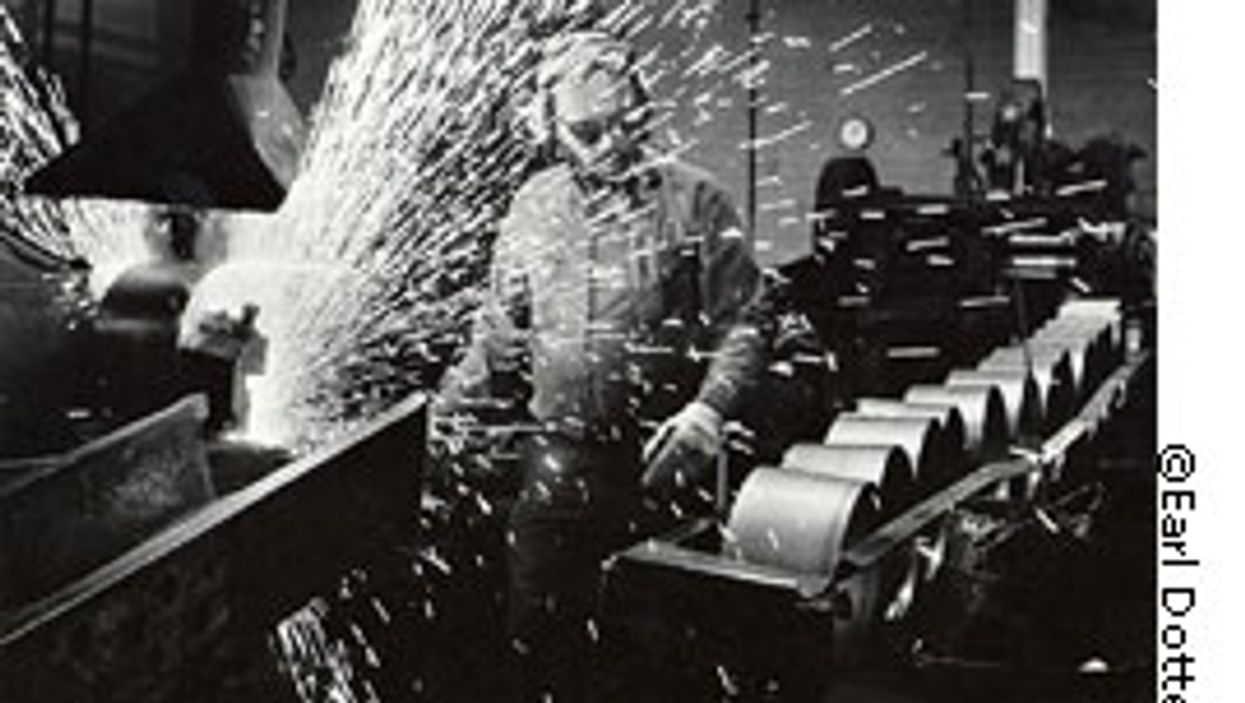 Like many welders, Michael Schwein of Billings, Montana, has extinguished a few pairs of flaming pants in his day. As he explains it, any frayed piece of clothing -- especially the cuffs of overalls -- can easily catch fire in the shower of sparks that fall on every welder. "At first you feel a little heat, and you look down and your pants are on fire." Luckily, he says, a welder can usually just rub it out and get on with work.

And when a person spends enough time with fire and glowing metals, pants aren't the only things that can get burned. Schwein has suffered near-instant "sunburns" when radiation from the welding arc hit unprotected patches of skin. And like practically every other welder around, he has felt small globs of molten metal -- welders call them BBs -- dribbling down his neck. Many welders live in fear that one those BBs will someday slip into his ear canal and perforate his ear drum or worse. "I know some guys who put nickels in their ears," Schwein says. "One guy had such big ears he needed to use quarters."

Apart from a few BB-sized burns here and there, though, Schwein has never been seriously hurt on the job. His case is typical: Welding looks obscenely dangerous, but severe injuries are rare. According to a survey of 43 occupations conducted by the Bureau of Labor Statistics, welders who suffered job-related injuries or illnesses returned to work faster than anyone else.

"There are a lot of potential hazards in welding," says August Manz, a New Jersey-based welding consultant and nationally recognized expert in welding technique and safety. But with a little training and common sense, he says, those possibilities never have to be become reality.

While flames and sparks provide most of the drama, one of the biggest threats to a welder's health is completely invisible, says Stephen Hedrick, a safety specialist with the American Welding Society. Hot metals produce a stream of fumes and gasses that no welder wants in his lungs, he says. A face full of fumes can result in nausea, dizziness, headaches, and "metal fume fever," a collection of flu-like symptoms that can last several days. Metal dusts and compounds formed during the welding process -- like nitrogen dioxide and ozone -- can cause chronic lung disease. Manganese fumes increase the risk of developing Parkinson's disease. Fumes in confined spaces can even asphyxiate welders. And according to the American Welding Society, traces of nickel, chromium, and other compounds found in some fumes may raise the risk of cancer.

Welders quickly learn to turn their faces away from the fumes, but that should only be part of the solution, Manz says. Unless they're outdoors, they usually need fans or exhaust systems to clear the air. If using a fan or working in the wind, a welder should let the breeze hit him sideways, not in the face or in the back, he says. And in extremely tight or confined spaces, such as inside a furnace, a welder may also have to wear a respirator.

Knowledge of the specific dangers is also crucial, Manz says. Welders and employers should read material safety data sheets that spell out the fume hazards for each type of metal. If anyone has any doubts about air quality, an industrial hygienist should be called in to run some tests, he says.

Welders also have to pay special attention to their eyes. Sparks and metal (either flying fragments or splatters of hot metal) can cause serious eye injuries. As if the sparks and splatter weren't enough, intense ultraviolet light from a welding arc can cause painful corneal burns called Welder's Flash, from up to 50 feet away. Prolonged or repeated exposure to infrared light can cause cataracts as well as retinal burns. All welders must wear goggles, and any welder using an electric torch should also wear a helmet with a tinted face shield. "If you don't wear a shield, you're nuts," Manz says, adding that welders should use the darkest shield that still lets them see what they're doing.

Proper clothing and safety equipment are also the key to preventing burns, Manz says. Sturdy, fire-resistant gloves are a must. Shirts should be made of denim or heavy cotton and have long sleeves (but no pockets that could catch sparks.) Likewise, pants should be sturdy and cuffless. And as Schwein can attest, the fewer stray threads, the better.

Most industrial welding jobs call for extra protection, including leather bibs, leather jackets, and leather leggings. And when you're welding metal overhead, fire-resistant earmuffs or ear plugs will protect the ears from falling sparks and BB's better than nickels and quarters. Good earmuffs will also help protect your hearing, which can be endangered by constant noise on the job.

In this profession, though, there's still more treacherous territory.

Welders who work on bridges are often at high risk of exposure to lead. (An estimated 90,000 bridges in the United States are coated with lead paint.) The short-term effects of lead poisoning include stomach cramps, irritability and anxiety, fatigue, muscle and joint pain, weakness and headache, poor appetite, and numbness, constipation, sleep problems, and loss of sex drive. Long-term effects can include high blood pressure, brain damage, nerve disorders, kidney damage, and birth defects. To prevent lead poisoning, the Occupational Safety and Health Administration requires employers to offer respirators and protective clothing; post signs warning against eating or smoking on the job; quickly notify you in writing of exposure and describe corrective action that will be taken to reduce exposure; and remove an employee from exposure if his or her blood lead level is above 50 micrograms per deciliter, among other things.

There are still more cautions. Welders working in small spaces with other welders need to take care not to get hit by someone else's flying sparks. The work area may contain numerous pieces of jagged metal, so it helps to use caution and stay current on tetanus shots. Welding in tight spaces and also overhead can cause a raft of back, shoulder and neck pain. And working with hot metal, welders can be exposed to extreme heat (even if they're working in extreme cold).

To protect themselves and others, welders have to make sure the fire stays where it belongs. Before ever lighting up a torch, they should check the area for cardboard boxes, open paint cans, or anything else that can catch fire, Manz says. It's important to remember, too, that explosive materials aren't always easy to spot. "A guy might see a twenty-gallon drum and think it would make a great barbecue," Manz says. "It's like playing Russian roulette."

Of course, a welder who's encased in a dark face shield and concentrating on his job can't watch every spark as it hits the ground, Manz says. For this reason, welders working in risky locations -- such as fields of dry grass or near oil pipelines -- should have "fire watchers" standing behind them. In addition to serving as a welder's eyes and ears, watchers are trained in putting out fires.

All in all, welders who understand their jobs and take all of the proper precautions have little to fear from their work, Manz says. In fact, he says, welding is one of the few jobs where every injury is entirely preventable -- pants' fires included.