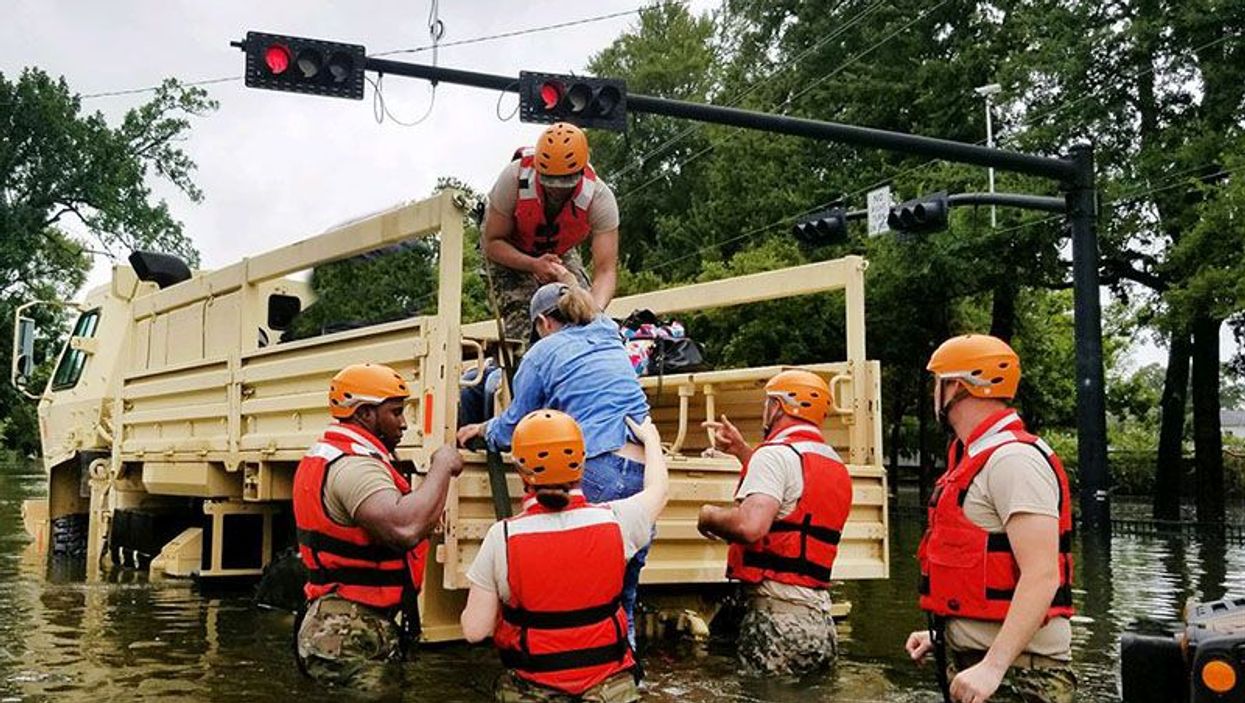 "Those floodwaters are being contaminated with sewage, because the sewers themselves are completely flooded and are backing up through the drains into the standing bodies of water that are around and in people's homes," Esper said. "Every time a person is wading across the street to get from one place to another, or down the road to get to higher ground, they are encountering much, much higher loads of bacteria."

But beyond that short-term threat, other hazards and medical problems will crop up due to the lack of modern amenities in Harvey's aftermath, experts said.

Dr. Bruce Farber is chief of infectious diseases at North Shore University Hospital in Manhasset and at Long Island Jewish Medical Center in New Hyde Park, N.Y. He said, "We don't even think about these problems in general because we live in a country where we take for granted a modern sanitation system."

Filthy water in flooded areas also is likely contaminated with chemicals and toxins, from a combination of household sources and commercial sources like car dealerships and industrial plants, explained Dr. Georges Benjamin, executive director of the American Public Health Association.

You don't have to drink flood water for it to pose a health hazard, said Dr. Maria Torroella Carney, chief of geriatric and palliative medicine for Northwell Health in New Hyde Park, N.Y.

Carney, a former health commissioner for Nassau County in New York, helped man a mobile medical van during the emergency response to Hurricane Sandy in 2012.

"We saw lots of injuries initially," Carney said. "Abrasions and lacerations from people trying to climb and move in flooded areas with woodwork and nails exposed."

These injuries posed a substantial infection risk, thanks to the dirty water.

"When you don't have access to antibiotics or sutures, they can be deadly for people," Carney said.

And, Esper noted, even people lucky enough to avoid scratches and scrapes will eventually run the risk of skin infections.

"Your skin breaks down and becomes raw after so much unrelenting exposure to water," Esper said. "Bacteria are able to find those little microscopic fissures and cracks, and cause local skin infections."

Good wound care and skin hygiene becomes paramount in situations like this, Esper and Carney said.

In addition, public health workers likely will be doling out many hepatitis A and tetanus vaccine shots, to prevent serious infections that can result from cuts and scrapes exposed to filthy water, Carney said.

Esper warned that people who drink the dirty floodwater, either intentionally or accidentally, could develop a nasty case of diarrhea or vomiting.

He added that he doesn't expect severe waterborne diseases like cholera or typhoid will erupt in Houston. "Those just don't happen here in the United States, and they're not likely to be brought here by this disaster," he said.

But even mild cases of diarrhea brought on by waterborne noroviruses will leave people vulnerable to dehydration, particularly given the ongoing August heat in Texas, Esper explained.

"That's going to be a one-two punch," he said. "You're going to have diarrheal illness that can lead to dehydration, particularly in the most vulnerable -- small children and the elderly."

Benjamin said people should stick to bottled water or fresh water brought in by emergency workers, rather than trying to boil water.

"When they evacuated their homes, I suspect very few of them grabbed their bag of medicines, so people are going to be going without their medications," Benjamin said.

So, Carney pointed out, a lot of the public health response will be focused on getting these folks the medications they need.

Unfortunately, Benjamin said, people don't always know the exact dosage or even the name of the drugs they are taking. Emergency response workers will have to make an educated guess regarding the medications these people need until their medical records are found, a potentially dangerous situation.

The thousands of people now dwelling in shelters also will have to protect themselves against waves of colds and viruses, experts said.

"When you have these respiratory viruses, they can sweep through a confined population very quickly," Esper said. "They love to attack the most vulnerable of us."

Carney's emergency medical van provided hundreds of flu shots in the aftermath of Sandy, she said. Although it's early for the flu season, Harvey responders might play it safe and do the same.

Basic hand hygiene will also be important for people in shelters, Benjamin said.

"Hand washing is absolutely essential," Benjamin said. "If I tell people to do one thing and one thing only, it's wash your hands after you go to the bathroom or before you eat."

People also will be dealing with emotional or mental issues, particularly those who already have mental health problems, Carney said.

"There were people who maybe had behavioral health issues, and this trauma triggered things," said Carney, describing the response to Hurricane Sandy. "We had to link them to services that were brought to different sites."

And if all this isn't enough, the Texas coast is one of the few areas in the United States with an ongoing risk of local transmission of Zika, a mosquito-borne virus that can cause devastating birth defects.

According to Benjamin, "There is Zika in that community, so you do have to worry about mosquitoes. Once the water starts receding, you will have a lot of standing water that will provide substantial breeding grounds for mosquitoes."

There is precedent for an increase in mosquito-borne illnesses following a natural disaster, Esper noted. After Hurricane Katrina in 2005, the Gulf Coast saw more cases of West Nile virus.

Zika "is something a lot of obstetricians and pediatricians will be watching for" in the aftermath of Harvey, Esper said.

Despite these hazards, Esper believes emergency teams are heading into Harvey much better prepared than they were for Katrina.