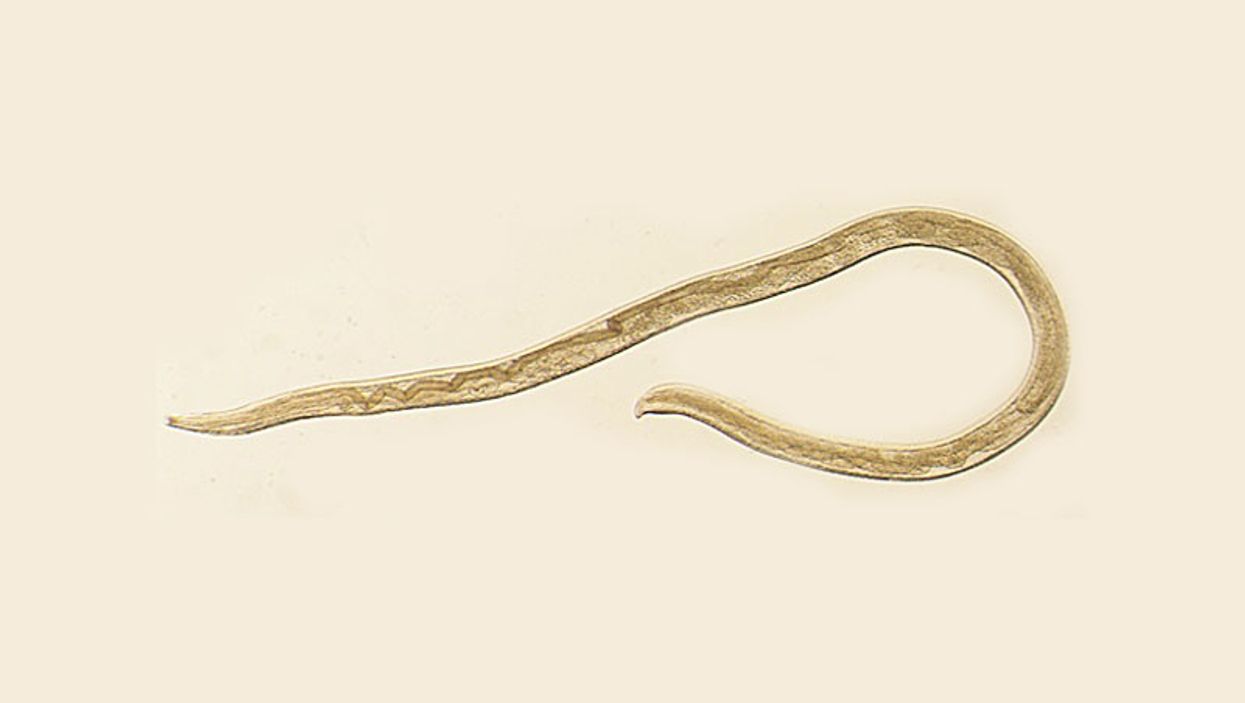 MONDAY, Feb. 12, 2018 (HealthDay News) -- Imagine going to the mirror and finding a small translucent worm crawling across the surface of your eye.

The first of many.

That's what happened to an avid 26-year-old outdoorswoman from Oregon, who recently became the first human ever infected by a type of eye worm previously seen only in cattle.

For days, the woman's left eye felt irritated. It felt like there was a hair or something in her eye.

After about a week, she reached up and pulled a small worm off of her eye, said Richard Bradbury, a U.S. Centers for Disease Control and Prevention researcher and lead author of a case report on the event.

The woman went to a local doctor, who pulled two more worms from her eye. The next day she proceeded to an optometrist, who found another three worms.

"A total of 14 worms were removed from her left eye over 20 days," said Bradbury, team lead of the Parasitology Reference Diagnostic Laboratory at the CDC's Division of Parasitic Diseases and Malaria. "They weren't able to remove them all at once. They had to remove them as they became present and visible."

All the worms were less than half an inch long. Doctors either tweezed them out or flushed them out of the eye, the researchers reported.

The worm, Thelazia gulosa, causes eye irritation but usually no permanent damage, Bradbury said. It simply crawls over the eye and under the eyelid, feeding on your tears.

"It's just really gross and very psychologically disturbing to see multiple small worms crawling across the surface of your eye," Bradbury said.

Other worms from the Thelazia family have been found on human eyes before, but this is the first time this specific worm has infested a person, Bradbury said.

"This is the first report in 20 years of this occurring in the United States, and that's about how regularly this happens," he said. "It's a very rare situation."

The researchers suspect the woman became infected with the eye worms while horseback riding in Gold Beach, Ore., a cattle farming region.

The worms are transmitted by face flies, which carry the larvae in their mouth parts, said Dr. Audrey Schuetz, an associate professor of pathology with the Mayo Clinic in Rochester, Minn.

"In general, flies are attracted to the moisture and salt in our tears, said Schuetz, who wasn't involved with the study. "The larvae are introduced into the fleshy part of our eyes when the fly is feeding on our tear film, the moist part around our eyes."

Most people avoid contracting eye worms because they wave away flies that land on their face, Bradbury said. In this instance, the woman might have been too distracted while riding horseback to free a hand and shoo the fly off.

In the end, the worms were removed from the woman's eye without any lasting damage.

Several of the worms were sent to the CDC for analysis. It took about a week of investigation -- including reference to papers published in German back in 1928 -- to specifically identify them as Thelazia gulosa cattle eye worms, Bradbury said.

Thelazia eye worms in general are very rare. Only 160 cases -- linked to species of Thelazia other than the one discovered in Oregon --- have been reported in Europe and Asia, where the worms are more common, Bradbury said.

"There's only ever been in the history of the published literature 11 cases of [any Thelazia infection] in America, so it's very rare and unusual," Bradbury said.

It is possible but generally unlikely for these worms to cause scarring of the cornea and even blindness if they saunter off the whites of an eye and into your field of vision, Bradbury and Schuetz said.

Folks worried about contracting eye worms can wear a hat with a net attached to protect their faces from flies, Schuetz said.

The study was published Feb. 12 in the American Journal of Tropical Medicine.

The World Health Organization has more about insect-borne illnesses.