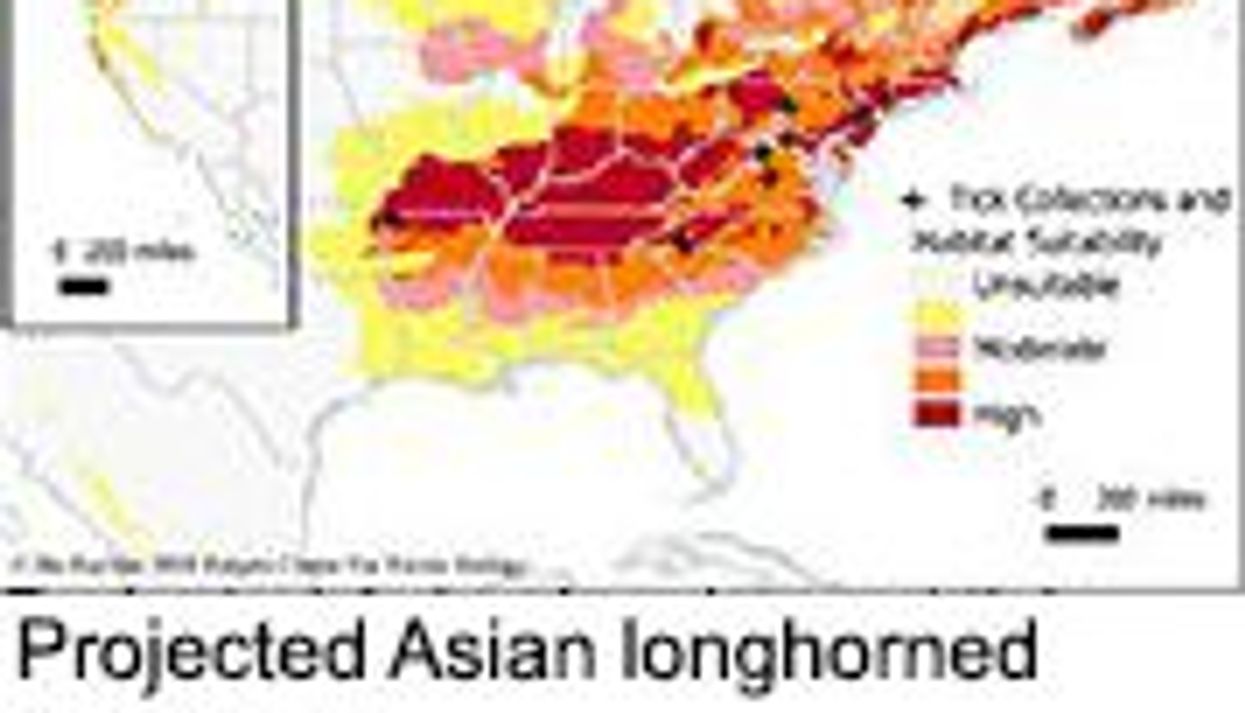 THURSDAY, Dec. 13, 2018 (HealthDay News) -- An Asian tick newly introduced into the United States has the potential to infest a wide swath of the country, researchers say.

It could carry numerous diseases that threaten humans with it.

The Asian longhorned tick "could spread all the way from the Gulf Coast to southern Canada," said study author Ilia Rochlin, an entomologist with the Rutgers University Center for Vector Biology in New Brunswick, N.J.

This highly adaptable pest originated in regions of China that share a similar climate to much of the United States, Rochlin said.

Huge swaths of land along the Eastern seaboard, the Midwest and the South would provide highly suitable habitat for the bloodsucking parasite, Rochlin's computer models predict.

The tick has already been found in nine states -- eight on the East Coast, and Arkansas.

This tick is not yet known to have infected any humans in North America, but it is linked to severe fever with thrombocytopenia syndrome (SFTS), an emerging tick-borne virus in China, South Korea and Japan.

SFTS is fatal for 10 percent to 30 percent of people infected, according to the U.S. Centers for Disease Control and Prevention.

SFTS is very similar to the tick-borne Heartland virus, which already is transmitted in the United States, Rochlin added. It's possible that the Asian longhorned tick could serve as a vector for Heartland virus as well.

The populations of this tick can grow rapidly once it finds a suitable habitat, said Thomas Mather, director of the University of Rhode Island's Center for Vector-Borne Disease.

Mather recounted a recent trip to a park in Staten Island, one of the five boroughs in New York City, during which he dragged a length of tick-grabbing cloth called a "flag" along the parking lot to see how badly infested that area had become.

"Within seconds our flag was covered in larvae," Mather said. "We were surprised at how abundant they were."

For this new report, Rochlin studied climate data from places where the Asian longhorned tick is already established, including East Asia, Australia and New Zealand.

He then used climate data from North America to estimate likely suitable habitats for the tick. They include:

Warmer temperatures to the south, cold winters to the north and dry terrain in the west make the rest of the United States less suitable, Rochlin said.

Mather said the ticks employ an "ambush" strategy to help find fresh sources of blood. Its larval ticks, thirsty for blood, hang out in tight clumps on the tips of tall grasses.

"They're all clumped there, ready to get onto something," Mather said.

Severe infestations can threaten livestock, weakening them by depleting their blood supply.

One of the ticks was found recently on a dog in Colorado that had traveled there from a New Jersey "hot zone," Mather said.

"What if it had gone to Seattle instead, which has a more permissive climate according to this model?" Mather said. "The number of emotional support animals flying on domestic airline carriers in the United States has more than doubled in the last year or two. Not just people are moving around, but pets are, and most of the reports of longhorned ticks so far have come from pets.

"The group sitting on the front line are pet owners and veterinarians," Mather continued. "They need to be aware of the potential of them picking up and moving these ticks throughout the country."

Rochlin's study was published Dec. 13 in the Journal of Medical Entomology.

The TickEncounter Resource Center from the University of Rhode Island has more about Asian longhorned ticks.